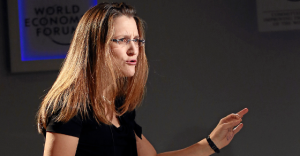 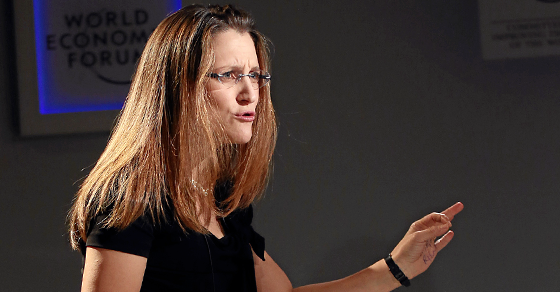 Chrystia Freeland: Canada will have a “full and open debate” after we formally sign the TPP

This will-they-won't-they tension is becoming unbearable!

This will-they-won’t-they tension is becoming unbearable!

No, that’s not a reference to Mulder and Scully reuniting on the X-Files – that’s a reference to the Government of Canada’s mixed signals about whether or not we’re going along with the Trans-Pacific Partnership, negotiated by the previous Conservative government earlier last year.

On Monday, International Trade Minister Chrystia Freeland announced in an open letter she is committed to a “full and open debate” on the merits of the TPP:

“As Parliament returns this week, I will work with my colleagues from all parties to conduct a full and open debate in Parliament, a commitment we made in October’s election. Further, I have written to the Government and Opposition House Leaders as well as the Chair of the Senate Standing Committee on Foreign Affairs and International Trade to convey my strong belief in the merits of a robust and transparent examination of the TPP.”

In the next breath, Freeland announced Canada will join 11 other countries in signing the TPP next week in New Zealand:

“…When the eleven other countries convene to sign the Agreement next week, Canada will attend as well. Not attending would mean withdrawing from the TPP altogether, even before Canadians have had an opportunity to fully debate its implications.

So don’t worry, Canada: you’ll have a full and open debate on it, but only after the agreement is signed.

Freeland stressed that “signing does not equal ratifying,” and explained “signing is simply a technical step in the process,” although the decision on whether or not Canada ratifies the agreement will fall on Parliament where the Liberal government holds a majority of seats in the House of Commons.

That nuance may do little to reassure those concerned about the deal, considering the Liberals’ pattern of mixed signals on the massive trade deal, which has been criticized for its potential impact on Canadian auto manufacturing jobs, environmental regulations and intellectual property law.

Freeland previously said her Liberal government is “committed to reviewing the agreement … and, crucially, to giving Canadians a chance to read it and to respond to it,” but said last week the TPP is now a take it or leave it “decision of yes or no.”

Adding to the confusion, it emerged last week that the government is considering “scrubbing” a controversial provision allowing corporations to sue governments from a trade deal with Europe, although a similar set of clauses is included in the TPP.

Prime Minister Justin Trudeau, who has described his Liberals as a resolutely “pro-trade party,” pledged during last fall’s election that Canada would have a “full and open discussion” before joining the TPP.

But only a few weeks after the election, Japan’s foreign ministry announced Trudeau and Japan’s Prime Minister had “agreed to promote the Trans-Pacific Partnership” with “both seeing the free-trade deal as beneficial to the region.”