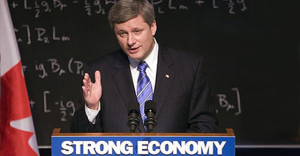 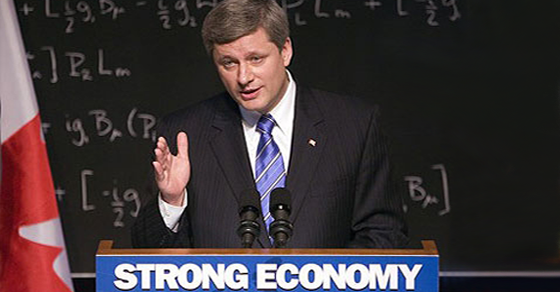 Stephen Harper thinks his economy is "head and shoulders above" the rest of the industrialized world, but what do the Canadian people think?

Stephen Harper thinks his economy is “head and shoulders above” the rest of the industrialized world, but what do the Canadian people think?

Well, according to a newly released internal report prepared for the Privy Council Office (that’s the bureaucratic arm of the Prime Minister’s Office, by the way), the three words Canadians thought best describes Stephen Harper’s economy are “uneven,” “fragile” and “weak.”

That’s not good news for a Prime Minister who hopes to run an election on his reputation managing the economy. Prepared by Leger Marketing and submitted to the Privy Council Office on March 31, 2015, the report is based on “a series of focus groups and a quantitative survey aimed at capturing Canadians’ perceptions of current events that are relevant to the Government of Canada.”

Leger asked focus group participants “to complete a written exercise in which they had to select up to three words on a list of 30 attributes that may or may not represent the current state of the national economy.”

As the report explains, “there was a fairly consistent narrative across locations to explain the choice of those words”:

“The economy was seen as uneven mostly because of the regional disparities in growth, wealth and job creation. Some also talked about income inequalities, perceived shrinking of the middle class and local poverty as signs that the economy was uneven. Fragile was another key choice of attribute for the state of the economy. This sense of fragility was created mainly by participants’ impressions that Canada was vulnerable to shocks that may not be of its own doing. The drop in oil prices and the subsequent devaluation of the Canadian dollar were seen as signs of that fragility. Almost all participants were aware of the sharp decline in oil prices and of the devaluation of the Canadian dollar.”

The report adds that “economic growth and job creation were considered top priorities for the federal government,” particularly among those in smaller cities, where economic issues “came down to local concerns: a perceived lack of well-paying jobs in their community and their region more generally” and “the apparent disappearance of highly-paid jobs in the manufacturing sector.”

“Many participants felt that such long-term employment with good benefits was a thing of the past,” the report explains, adding “that local workers too often had to settle for temporary jobs or contract work without strong benefits packages.”

That reflects the findings of a report released by CIBC in March that found Canadian job quality had plummeted to a 25 year low during Harper’s time in office, with part-time jobs, self-employment and lower-wages becoming the new normal.

“This was a major source of worry for the economic future of their communities and their province overall,” Leger’s report notes.