Canada is now witnessing the “corporatization” of its universities and colleges following decades of massive government cuts to funding.

According to a new report from the Canadian Union of Public Employees, public funding for Canada’s post-secondary education system has fallen dramatically over the last three decades, with costs shifting onto students through higher tuition as corporate partnerships compromise the integrity of academic research.

In 1985, public funding accounted for 81% of operating revenue at universities in Canada. 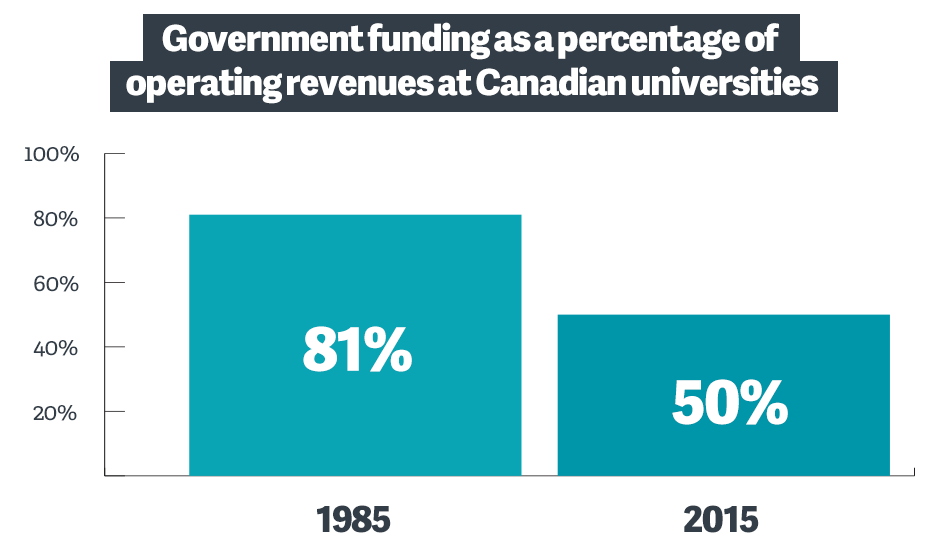 As a result, Canadian post-secondary institutions are increasingly dependent on the “generosity” of “wealthy individuals and corporations” to cover costs.

In 1985, only 2.7% of university operating revenue came from neither public money nor user fees, but by 2015, that had more than quadrupled to nearly 10%. 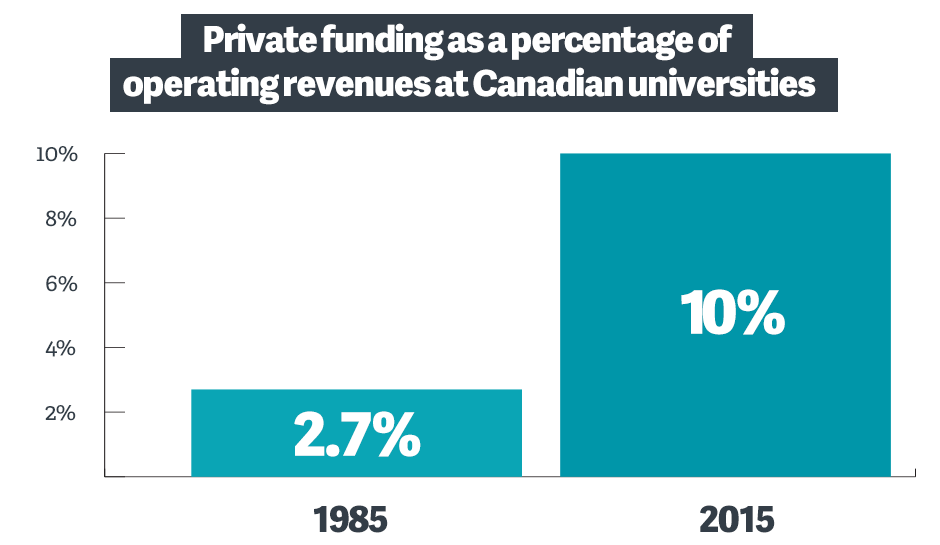 The report notes together donations, grants and investments accounted for 34.6% of funding for sponsored research.

The report points out:

“As a major source of funding, donations from wealthy individuals and corporations do not simply replace operating revenues that used to come from governments. Many of these donations have conditions attached and that is where problems often occur.”

The report notes money is often given with strings attached – and, those conditions mostly involve changes in university operations.

Back in 2012, Louis de Melo, former Vice-President of External Relations at the University of Ottawa told the Financial Post: “big donors get excited by big visions. Universities have to come up with bold strategic plans to transform the school … They’re not interested in having their money used to maintain the status quo.”

In one memorable controversy, York University was widely criticized after striking a $60 million deal with an independent non-partisan think tank founded and chaired by then-RIM Chairman and co-CEO Jim Balsillie to establish a school of international law. As the Financial Post noted, the University’s controversial original agreement gave CIGI a “voice to influence and veto, staffing and curriculum at the school.” York University later cancelled the deal.

David Robinson, executive director of the Canadian Association of University Teachers, told PressProgress many universities are underimining the integrity of their work by giving corporations “veto” power on research:

“We did a report back in 2014 looking at the major collaborations across the country and what we found that of the 12 we examined, over half of them did not have any protections for academic freedom. A significant number gave what is essentially a veto to the corporation over regards to the publishing of research. There were a number of significant academic freedom issues and in some cases this has blown up.”

CUPE’s report points to Nancy Olivieri, a University of Toronto and Sick Kids Hospital researcher, who flagged concerns about adverse side effects of a drug she was testing.

When its manufacturer, Apotex, threatened legal action, the report notes, Olivieri was left to maneuver in the legal system “with no support from the university while U of T conducted negotiations with Apotex over a potential donation deal.”

“It doesn’t particularly shock me that a company that pays university researchers to conduct trials for them wants to influence the outcome,” Robinson said. “What does shock me is that universities often allow that to happen.”

“For a relatively small amount of money they agreed to sell their academic integrity.”

The report also notes Carleton University’s partnership with Preston Manning and billionaire Clayton Riddell to establish a political management graduate program that was likened to a training centre for Harper Conservative staffers. CUPE noted donors were given the right to appoint three of five steering committee members, giving away control of the program’s budget, hiring and curriculum to “right-wing political operatives.”

More recently, Carleton University accepted money from a wealthy media mogul’s foundation to create the Allan Slaight Chair For the Study of Conjuring Arts,  advancing its namesake’s “lifelong dedication to and intellectual interest in magic.”

“Often, these types of deals come with seats on the department’s steering committees, which give these corporations a great deal of influence over what is taught and researched in the departments,” Coty Zachariah, national chairperson  of the Canadian Federation of Students told PressProgress.

Zachariah notes that the University of Toronto “signed secret deals with the Joseph Rotman Foundation, with Peter Munk of Barrick Gold and Horsham Corporations, and with Nortel, allowing these corporations to influence the direction of the Faculty of Management Studies, the Centre for International Studies and the Nortel Institute for Telecommunications, respectively.”

The problem may be bigger than the famous cases suggest as well. The CUPE report’s author, Chandra Pasma told PressProgress “We only end up seeing the cases where the administration intervened to tell someone they couldn’t say something. We don’t know the cases where somebody chose not to pursue a topic or to voice an opinion because it was going to make the donor upset.”

On the whole, Pasma said “Really, unless the donor is just writing a cheque and then walking away, there’s always the risk of a chill on academic freedom. If the deal is contingent on donor satisfaction, then the university might be inclined to come down hard on a professor or student voicing an opinion that will make the donor unhappy no matter where they are situated.”

An analysis by PressProgress last year found corporate executives now make up 33.5% of board members at universities across Ontario.

The CFS chairperson said corporate representation on university boards of governors affects what say students, staff and professors have on the highest decision-making body at the university.

“These internal stakeholders are outnumbered by external stakeholders when conversations surrounding tuition fees, sexual violence policies and building priorities take place,” Zachariah said.“This means that students’ voices and experiences on campus are overpowered by the institution’s best interests, according to corporate entities.”

“Increasingly, boards are resorting to corporate tactics like closed meetings, codes of conduct and confidentiality agreements, making it harder for students to participate or even know what decisions are being made that impact them.”