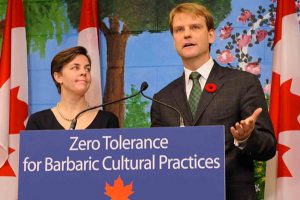 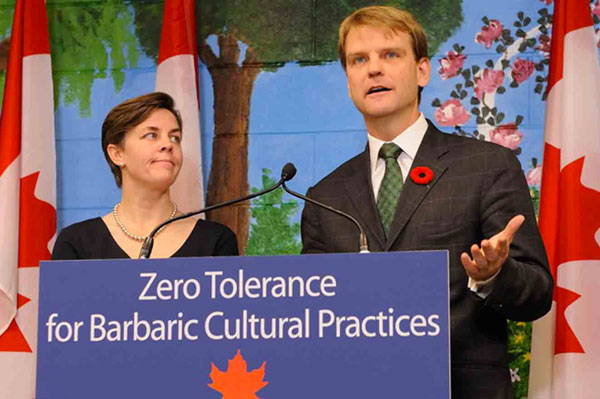 Canada, we need to talk about racism

Houston, we have a problem!

If there’s one thing that became clear during the marathon election campaign, it’s that Canada has a racism problem.

The divisive and “racist” rhetoric peddled by Stephen Harper and the Conservatives didn’t go unnoticed by the international press.

But the underlying problem it exposed didn’t spring up overnight.

Back in 2003, 85% of Canadians called multiculturalism a source of pride and a significant aspect of the Canadian identity. Fast forward to March of 2015 — and 46% of Canadians said we admit too many visible minorities into our country.

As we reflect on what’s been called our “most hateful election campaign” ever, here are six cases that put the ugly side of the Conservative campaign in context: Indigenous women in Canada are murdered at a rate four times higher than white women.

And with 1,181 missing or murdered Indigenous women (and counting) since 1980, the Harper government stood steadfast in its refusal to call a public inquiry to contextualize the phenomenon. Over 230 cases of missing women remain unsolved and their families have said police have shown little interest in their cases. Meanwhile, an estimated 300 Indigenous women have gone missing or been murdered during the Conservative government’s tenure.

During the campaign, some Conservatives provided their own analyses about what they thought was at work. One blamed “lack of economic activity, or simply put, a lack of a job.” Another named “hitchhiking” as a cause. “What is I think fairly clear is that, you know, quite often people are engaging in behaviour — hitchhiking on these lonely roads by themselves at night, that behaviour is dangerous.” The United Nations report condemning Indigenous human rights in Canada? The fact that 65% of First Nations reserves don’t have clean drinking water? The squalid housing conditions on reserves? That the suicide rate among Inuit men is 40 times the rate of the rest of Canada? First Nations kids making up half the foster care system despite only representing 4% of Canada’s population? While the specific issue of women wearing the Niqab at public citizenship ceremonies (affecting two women since 2011) was the lightning rod for the Conservative campaign’s rhetoric in the 2015 election, intolerance towards Muslims has been rising steadily over the past decade

And during the campaign, Muslim women reported instances of verbal and physical assault as the niqab debate raged. Muslim candidates also saw their signs defaced with racial slurs while female candidates in Quebec saw their faces on their campaign signs covered with black spray paint to resemble the niqab. The practice of carding (where police officers can stop people, without actual cause or suspicion of committing a crime, and demand their identification) targets black men at three times the rate of white men.

Black and aboriginal inmates are also significantly over-represented in Canadian jails, with “staggering ratios that mirror those of blacks in American jails.”

A McGill University professor explains the connection between carding and high incarceration rates: “The more police officers you have on the ground, the more likely they are to start to process visible minorities and poor people. Then they trickle into the criminal justice system at higher rates than the general population.”

5. Our lack of compassion for refugee claimants After the Federal Court called Conservative cuts to refugee health care “cruel and unusual,” the Conservatives government insisted on spending $1.4 million appealing that decision and sent out flyers out to constituents boasting about standing up to “bogus” refugee claimants.

Meanwhile, a report found Roma refugees to be the victims of systemic racism in our refugee system, with allegations that the Harper Conservatives added Hungary to a “safe countries list” in order to specifically limit the Roma’s ability to apply for refugee status in Canada.

And during the election campaign, serious questions were raised about the government’s policy of picking of non-Muslim Syrian refugees over Muslim ones.

6. Just look at the language we use It’s not just “bogus” refugees. It’s Barbaric Cultural Practices. It’s “old stock Canadians” and dog-whistle politics. It’s “stay the hell where you came from.” It’s “not the way we do things here.” It’s “embrace our culture”.

The good news? About 70% of voters rejected the offer of the Conservatives in the campaign.

There’s still hope for an anti-racist Canada. Facing the racism is Step 1.

Photos: Twitter and used under a Creative Commons BY 2.0 licence (thienv and takver).