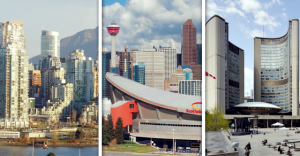 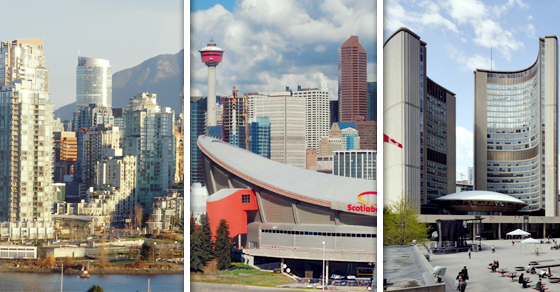 Canada’s cities don’t have a spending problem. They have a revenue problem.

Right-wing politicians are going to tell you Canada's cities have a spending problem. They're wrong.

If you bother listening to right-wing politicians and pundits, they’ll always tell you the reason cities are facing budget problems and growing debt burdens is because City Hall is just spending too much money.

Right now, Toronto Mayor John Tory is trying to push through a 2.6% across the board spending cut, but you’ll never hear him talk about what these cuts will mean for crumbling infrastructure, overcrowded rail and subway cars or the elimination of programs ranging from student nutrition to affordable housing – Tory will talk about making do with less instead:

“This is one of most important elements of their job, is to find ways with scarce public resources to do more, or to do the same for less, and that is all we’re asking here.”

Tory’s talk echoes the late Rob Ford, who spoke of efficiencies and tightening belts instead of cuts and claimed Toronto has a “spending problem, not a revenue problem”:

But according to experts in public administration: spending isn’t the problem, revenue is the problem.

As Ryerson University politics and public administration professor Myer Siemiatycki points out, “the City quite simply does not have enough money to go around”:

“Toronto’s real problem is an impoverished municipal government in a city of unprecedented private wealth. It is odd that mounting evidence of municipal dysfunction now occurs at the same time that new records are set month after month for city real estate values. Public services and infrastructure in Toronto have hit crisis point at the same time that City Council refuses to adequately tax the higher reaches of record level residential property values.”

Here are few things to think about next time a right-wing politician or pundit claims cities have a spending problem instead of a revenue problem:

Municipalities across Canada have unique arrangements, cities do not have the same taxation powers as provinces or the federal government.

Given cities are dealing with “limited revenue-generating options and face increasing responsibilities and rising costs,” many now wonder if it’s time to “re-examine the scope of municipal powers”:

“Canadian cities need more money and more power to meet the challenges of the 21st century. As it stands now … cities are creatures of their provincial governments. That arrangement may have worked when Canada was still an agrarian society, but today, when it is one of the most urbanized societies in the world, it makes little sense.”

The Alberta government and the province’s two biggest cities, Calgary and Edmonton, are currently toying with the idea of new revenue powers – Calgary Mayor Naheed Nenshi says he’d like to have a conversation “looking at the entire fiscal system.”

The City of Vancouver is set to implement a new tax on vacant condos and homes and Toronto’s Land Transfer Tax brought in $360 million in revenues for the City in 2014.

The LTT and the now cancelled vehicle registration tax were powers created under the 2006 City of Toronto Act, legislation that sought to give the city expanded revenue tools. The Canadian Centre for Policy Alternatives suggests that if the full powers of the act were exercised, this could add $400 million in revenue each year to the City of Toronto’s $2.8 billion annual budget, suggesting the “problem isn’t spending – Toronto has a revenue problem.”

While property taxes are the single biggest source of revenue for many cities, they don’t rise in line with inflation.

This is because the amount collected in property taxes is based on the revenue collected the previous year if City Council decides to freeze taxes, ratepayers will contribute exactly the same amount as last year. If they raise them by, say, 2% they will collect exactly 2% more in dollars. Inflation acts independently of this process, so if Council freezes the rates the overall value of the revenue taken in will be diminished.

Once the amount to be collected it set, the amount individual ratepayers will be taxed is calculated based on the value of their property in relation to everyone else’s.

Here’s how the Toronto Star’s Edward Keenan illustrates this problem:

“Taxes on my home in a rapidly gentrifying area have gone up more than 50 per cent in the past five years due to MPAC assessments, because the market value of my home has gone up far faster than the value of average homes across the city. Meanwhile, I know a couple who own a home in Scarborough in a neighbourhood where home values have increased, but not nearly as much as the average house appreciation city-wide, and that couple has seen their property tax bill drop consistently for more than a decade.”

A 2012 report on Toronto showed that real property taxes paid per household fell by nearly 15% between 2001 and 2012. Inflationary tax increases alone would have saved the city tens of millions in revenue every year.

Property is taxed at a flat rate, it’s not taxed on a sliding scale according to the value of the property.

As Siemiatycki notes, this can be “unfair and inefficient”:

One specific problem with structuring property tax this way is it generates more inequality. According to a report published by the Canadian Union of Public Employees, this means lower-income homeowners effectively shoulder a greater burden for paying for municipal services than higher-income homeowners:

“In some municipalities, particularly those in large census metropolitan areas, lower-income homeowners had a tax burden four or five times greater than their higher-income counterparts.”

One idea proposed by high-profile economists like Thomas Piketty and Nobel Prize winner Joseph Stiglitz is the idea of a progressive property tax – taxing property on a sliding scale similar to how income is already taxed.

In addition to addressing inequality, Simon Fraser University public finance professor Rhys Kesselman suggests this could also “improve fairness within the overall tax system” and also “reduce the tax biases that encourage over-investment in housing,” pointing to Vancouver as oneexample:

“It would reduce the returns to both foreign and domestic speculation on rising home prices. It would raise the cost of holding vacant homes, thereby increasing the rental supply. The scheme would also discourage the construction and renovation of high-priced homes and thereby release land and labour for more moderately priced housing.”

One recent study by the CCPA argues that shifting to a progressive property tax system could raise the City of Vancouver as much as $1.7 billion per year in new revenue.