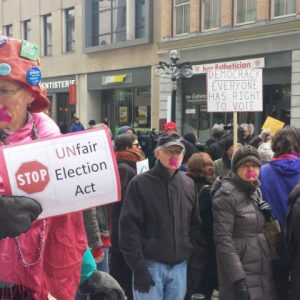 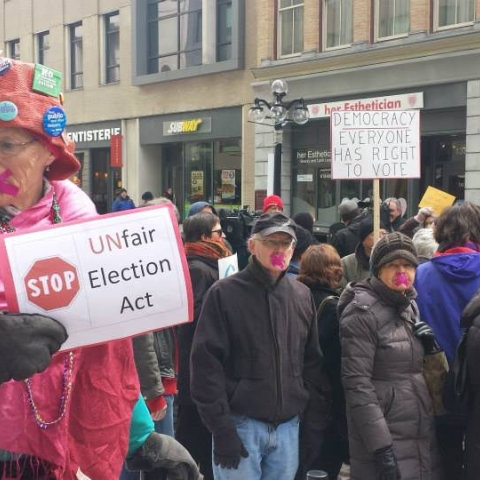 After spending months defending its “terrific” Unfair Elections Act, the Harper government is spending this week tabling 45 amendments. Many more amendments are needed to fix the legislation, but let’s review some of the flip-flops that got us here, via Pierre Poilievre. The Minister of State for Democratic Reform, known for his message discipline, has […]

Many more amendments are needed to fix the legislation, but let’s review some of the flip-flops that got us here, via Pierre Poilievre. The Minister of State for Democratic Reform, known for his message discipline, has been stickhandling the file for the government.

We were aware of Elections Canada’s position on these issues. We just happen to disagree. We believe that it is fair to have Canadians arrive with a piece of ID in order to demonstrate who they are and where they live. That is what the Fair Elections ct requires. (House of Commons, April 3, 2014)

Allow electors to vote with two pieces of identification that prove their identity and a written oath as to their residence, provided that another elector from the same polling division who proves his or her identity and residence by providing documentary proof also takes a written oath as to the elector’s residence. This new measure will allow those who do not have identification proving their residence to register and vote on polling day. To ensure the integrity of the vote, new verification of potential non-compliance will be done after polling day, and an audit of compliance with registration and voting rules will be done after every election.

The next point of peculiarity in the opposition’s critique is related to fundraising. The opposition has come out against the provision in the act that would allow parties to exempt fundraising calls, emails, and letters from campaign expenses. The provision is based on a well-established principle that there is a distinction between raising funds for a campaign and spending those same funds for a campaign. It is the same reason why people do not put mileage on their car while they are standing and putting gas in it. The mileage only starts to add up when the wheels start turning. The fuel in the car, by itself, does not cause the mileage to grow. (House of Commons, March 24, 2014)

Eliminate the proposed exception as to what constitutes an election expense in the case of expenses incurred to solicit monetary contributions from past supporters.

The education function and the advertising function of Elections Canada are not being limited. They are being focused on their real purpose, and that is to inform Canadians of the basic information about voting. (House of Commons, April 4, 2014)

Specify that the Chief Electoral Officer may communicate with the public, but where he advertises to inform electors about the exercise of their democratic rights, he can only do so on how to be a candidate, when, where and how to vote, and what tools are available to assist disabled electors. Further, the Chief Electoral Officer may support civic education programs for primary and secondary schools.

Mr. Speaker, in fact right now the requirement is zero. There is no requirement to retain any of the information. The Fair Elections Act creates a mandatory public registry, which, by the way, Mr. Kingsley lauded yesterday, and it requires that the records be kept for one year. The reality is that the requirement applies also to the campaign volunteer who procures the call. A lot of these volunteers move on to different things. They are not permanently committed to a campaign. It is not reasonable to expect that for ten years they are going to keep a record of a telephone script, so the one year requirement is reasonable. (House of Commons, March 26, 2014)

Require calling service provider to keep copies of scripts and recordings for three years instead of one.

Mr. Speaker, I think the member is referring to the issue of the central poll supervisors, which an all-party committee here recommended be appointed on the recommendation of the first place party in each constituency across the country. That is the same way that the deputy returning officers have long been appointed at a local level in every riding in the country. Elections Canada would continue to have the ability to reject any recommendations that are not acceptable, but at the same time, we think this is a fair and democratic part of our system that the various parties—all parties—have the power to recommend officials who work in the election apparatus on election day. (House of Commons, April 7, 2014)

Given Poilievre’s spectacular reversals, here’s hoping the government will back down even more and make additional changes, including: