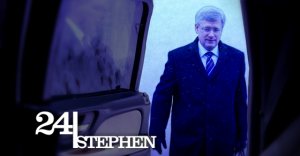 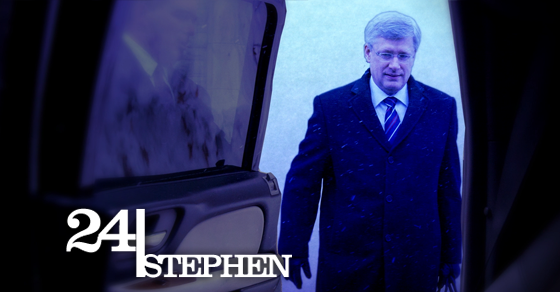 SHARE this brand new 24/Stephen video with your family, friends and co-workers!

Take a look at this brand new 24/Stephen video!

With the longest election campaign in recent Canadian history is now under way, 24/Stephen takes a look back at some Conservative leader Stephen Harper’s proudest moments in the past session:

How many proud moments do you remember?

1. Tony Clement: Took $45.7 million from the G8/G20 Legacy Fund and spent it on gazebos, public washrooms and beautification projects nowhere near the event.

3. Leona Aglukkaq: Ignored questions about people in her riding looking for food in a garbage dump, read the newspaper instead.

4. Peter MacKay: Turned the procurement of F-35 fighter jets into a fiasco.

5. Patrick Brazeau: Harper’s Senate appointee got himself into trouble, plead guilty to drug possession and assault.

6. Bernard Valcourt: At the release of the Truth and Reconciliation Commission’s report, the Minister of Aboriginal Affairs Bernard Valcourt would not stand during a standing ovation in response to a call for action on missing and murdered indigenous women.

7. Julian Fantino: “What the frig is wrong with that guy?” asked one veteran. Seriously.

9. Mike Duffy: The Conservatives’ biggest fundraiser on the “rubber chicken circuit” dragged the PMO down with him.

10. Rob Anders: “Canada’s worst MP” once fell asleep in the House of Commons.

11. Paul Calandra: Broke down in tears apologizing for giving irrelevant answers to the House of Commons questions on Canadian military action, although he said he would probably do it again.