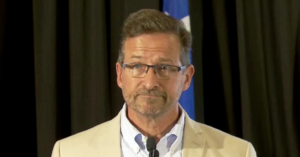 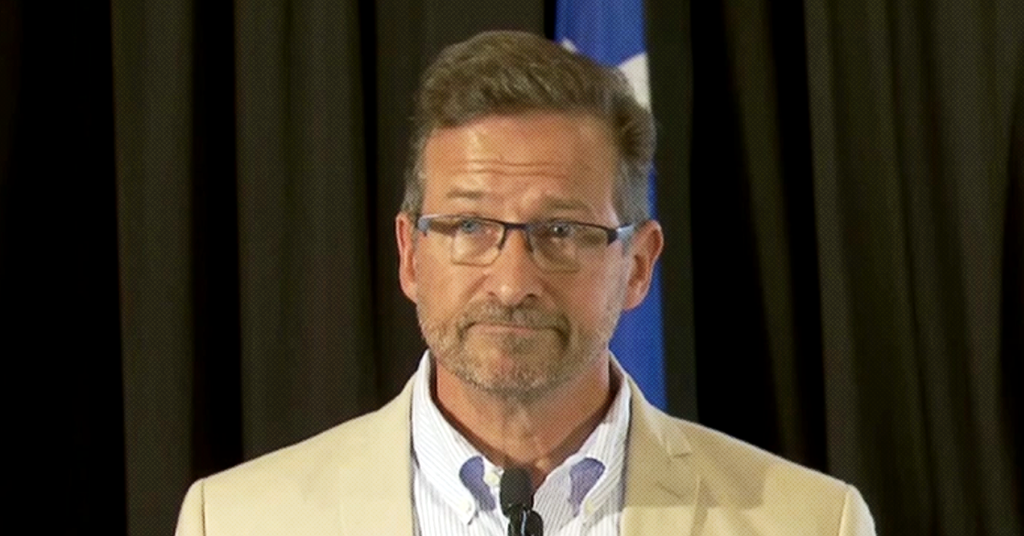 A man who is of a mixed racial background says he was stunned when the leader of the Bloc Québécois accused him of seeking the “lynching” of a white Bloc MP who recently opposed a motion on systemic racism.

Twitter user Douglas Connors said he recently tweeted an article by PressProgress highlighting Bloc MP Alain Therrien’s past promotion of a blog that contained anti-Muslim content. Therrien is the Bloc Québécois MP who recently made headlines after he blocked a motion condemning systemic racism.

Connors said he tweeted at Bloc Québécois leader Yves-François Blanchet because he wanted to know why Therrien would not “address the media himself” to explain his views on “discrimination or racism.”

“That’s when Monsieur Blanchet escalated things by going from 0 to 100 in one tweet,” he said. “His initial response to me essentially was: ‘Because you people or those you support only want a political spectacle’ and a — wait for it — ‘lynching’.”

“I use my real name and picture on Twitter,” he said, adding that Blanchet should have known “that my skin is brown.” 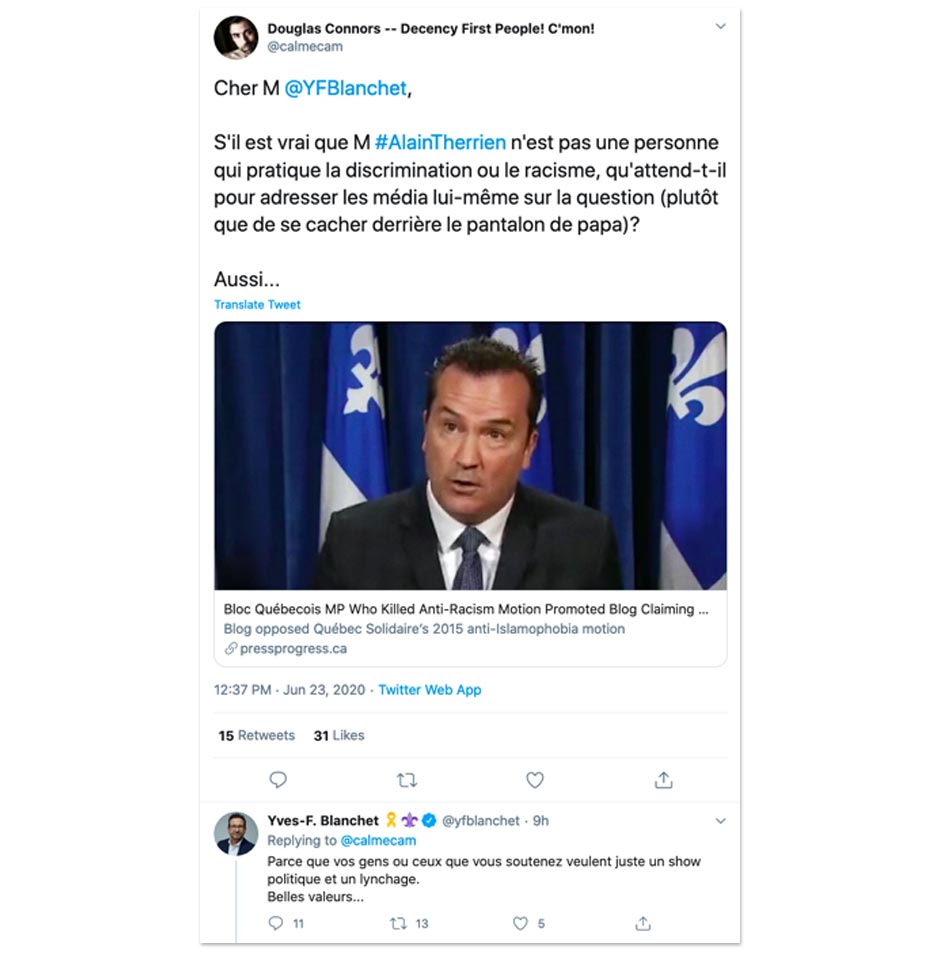 “The lynching accusation was his first go-to response, that’s quite a rapid escalation,” Connors said, adding that he thought to himself: “‘Okay, Yves! Whatever you say there, guy’ as I very slowly back away thinking ‘yikes!’”

“Lynching is usually what white people have done to Black people,” he explained. “Monsieur Blanchet perhaps did not know that I am part Black when he said it, but he knows from my photo that I was not white.”

“There is something particularly distasteful about a white man accusing a part-Black man of seeking the lynching of another white man, particularly about whom racism has been alleged by a colleague of colour.”

“He suggests that not only I, but also “my people and those I support” are part of some lynching party,” he said. “That strikes me as a rather paranoid statement from someone afraid ‘the coloured people are coming to ‘git’ me’.”

“He was arrogant enough to believe it was his privilege to swing that word like a weapon against a person of colour — and he did not hesitate.”

In fact, when Connors replied to Blanchet and informed him of his background and told him the term “lynching” was racist, Blanchet did not walk back his statement or apologize.

“Blanchet had the temerity to respond with a final tweet accusing me of succumbing to delirium, claiming his past work and writing proves he’s not racist” before “prescribing me to take a step back and calm down,” Connors said.

“Then he blocked me.” 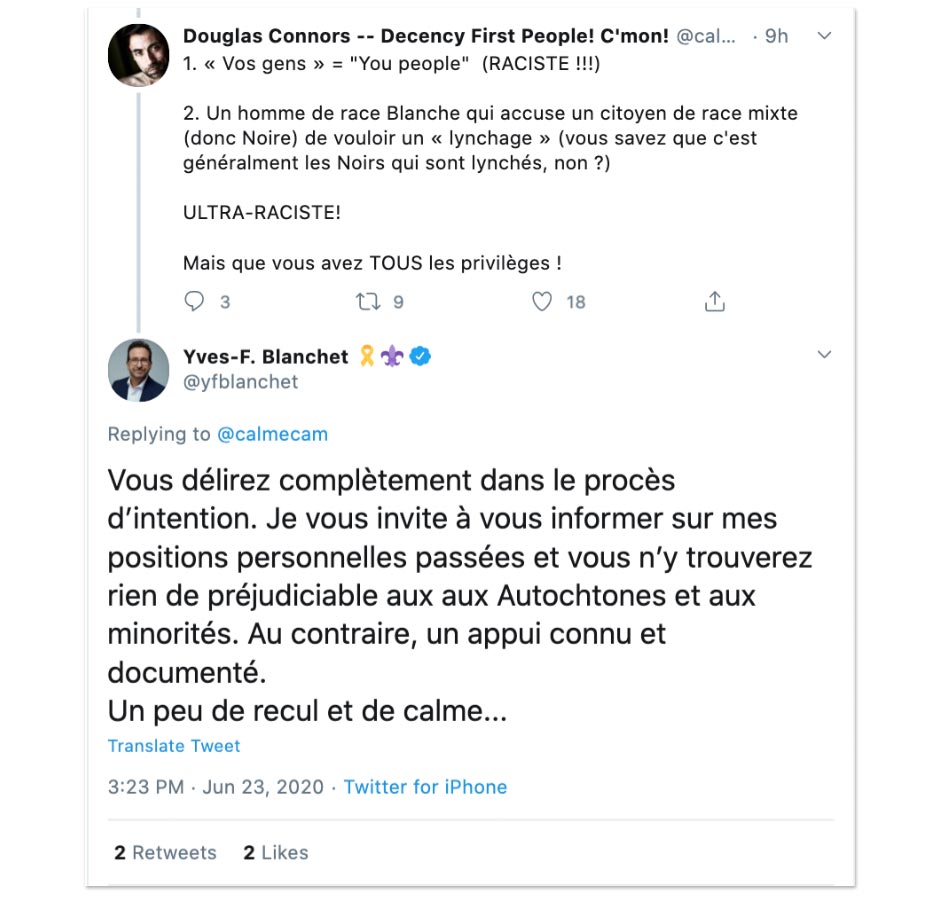 Connors said he is “quite fortunate” that “this is by far, hands down, the most overt, nasty, just plain stereotypically dumb personal exposure I’ve had to racism directed at me in my life.”

Last week, Blanchet said he would not permit Alain Therrien to speak to the media about his opposition to the systemic racism motion because he didn’t want it to become a “side show.”

Blanchet did not respond to requests for comment from PressProgress.