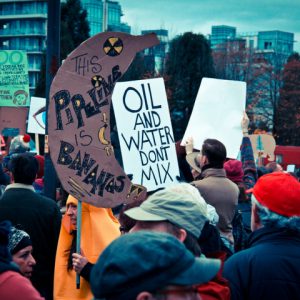 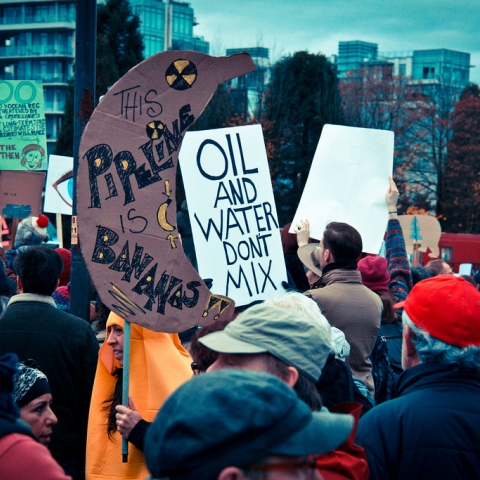 It’s only Monday, and Big Oil is already having a bad week. Here’s why: Kitimat’s Enbridge smack down The residents of this port town on the Northern Coast of British Columbia voted a resounding “No” over the weekend to Enbridge Inc.’s proposed Northern Gateway pipeline. Despite the company’s well-funded campaign, the final count in the non-binding […]

It’s only Monday, and Big Oil is already having a bad week.

The residents of this port town on the Northern Coast of British Columbia voted a resounding “No” over the weekend to Enbridge Inc.’s proposed Northern Gateway pipeline. Despite the company’s well-funded campaign, the final count in the non-binding vote wasn’t even close: 1,793 opposed versus 1,278 who supported the $6.5 project, or a margin of 58.4% to 41.6%.

Enbridge pitched the plan as an economic boost to the town, but in this David and Goliath battle, Kitimat residents sided with Douglas Channel Watch, a small environmental lobby group. They were persuaded the environmental risks of two pipelines — one carrying bitumen from Alberta to Kitimat’s port and another carrying a form of natural gas used to dilute the bitumen from Kitimat back to Alberta — were just too high a price.

On the eve of the vote, the Financial Post explained why this vote mattered so much:  “The vote will provide a checkpoint to gauge what matters most to ordinary British Columbians, and perhaps a glimpse into the future, in which highly contentious natural resources projects are put to a vote and decided by the majority.”

Indeed, but will the Harper government listen?

“Enbridge should listen, the Conservatives should listen,” NDP MP Nathan Cullen, who represents the town of Kitimat, said after vote.

“They say in politics, money always wins, but not this time. The people did,” he said.

A new Environment Canada report reveals the energy sector has surpassed transportation as the biggest source in Canada of climate-change causing greenhouse gas emissions, accounting for one-quarter of GHG.

The milestone comes as the Harper government continues to drag its feet on regulations to reduce climate pollution. In fact, expect a few more years to pass before the government will produce regulations. (And even with regulations, we already know that Canada will fail to meet its watered-down target of reducing greenhouse gas emissions by 17 per cent of 2005 levels by 2020.)

Newly released company records reveal the company was dismissive to employees “who raised concerns in recent years about the safety of the company’s existing and brand new North American pipeline infrastructure,” the Toronto Star is reporting.

Thousands of pages of records, released by the Senate energy and environment committee and available online, include this 2011 email from a TransCanada manager to engineer Evan Vokes, a whistleblower who worked for the company for five years.

“Please stop the investigation you seem to be doing on your own,” the TransCanada manager of materials and engineering wrote. “This discussion has been going on for over a month, you need to accept where we are and become aligned with where we are going as a company.”

The release of these records follow the completion of an National Energy Board audit in February, which found TransCanada was breaking federal rules related to hazard identification, risk assessment, monitoring and management review.

Drawing on the work of the world’s leading scientists who make up the Intergovernmental Panel on Climate Change, Toronto-based Environmental Defence released a report Monday that spells out why Canada can’t tackle climate change and pursue rapid tar sands growth.

“The tar sands are high cost, high risk, and high carbon. In a world on a carbon diet, these types of extreme energy sources will need to be the first to go.” In other words, “it is inconsistent to acknowledge, as our federal government has, that climate change requires urgent action while supporting major new pipelines and tar sands expansion projects that lock us into polluting fossil fuels. Like trying to lose weight while eating five chocolate cakes a day, these are incompatible goals,” the report states.

Photo: doucy. Used under a Creative Commons BY 2.0 licence.