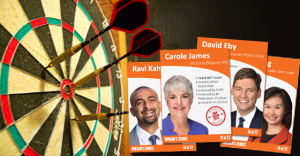 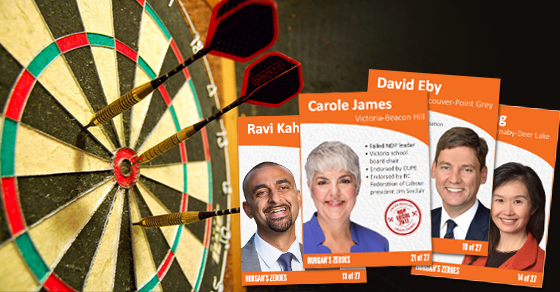 Christy Clark's big business allies have already launched a smear campaign against the new BC government.

The Lieutenant-Governor wasn’t even finished swearing in BC’s new NDP government when one of the province’s big business lobby groups launched a smear campaign against Premier John Horgan’s cabinet, going so far as to suggest British Columbians even throw darts at photos of the new cabinet.

The Independent Contractors and Business Association of British Columbia describes itself as “the voice of BC’s construction industry,” although its mission is to promote non-unionized workplaces in the construction industry and it’s actually an affiliate of Merit Canada – one of Canada’s biggest anti-union lobby groups.

The ICBA is also a major ally of Christy Clark’s BC Liberals. Elections BC records show ICBA has donated over $350,000 to the BC Liberals over the last decade and its former chairman was linked to a shadowy group that ran $2 million in attack ads against Horgan in the run-up to this year’s election.

That might help explain why the lobby group is launching a new smear campaign targeting BC’s NDP cabinet ministers, attempting to portray them as “bought” and “owned” by their “union masters.”

If that’s not enough, the ICBA also released a set of trading cards accompanied by a suggestion that British Columbians print them out and “add them to your dartboards.” The cards warn that the “Horganization of BC” has begun and include blurbs that the ICBA claims shows how the cabinet is stacked with “union bosses” and “union activist after activist.”

While it’s true the labour movement stands against the kinds of anti-worker policies promoted by groups like the ICBA, the cards do not appear to back up the ICBA’s own point. Despite their claims, the cards actually show a majority of BC’s new cabinet ministers have no formal links to labour unions.

In many instances, the ICBA simply pasted random biographical details and stamped “union bought” and “union owned” as if they’ve proven their point. In many cases, the cards simply list various public offices they’ve held or roles within the the BC NDP.

In one example, the lobbyists equate simply being a school teacher with being “owned” by “union masters.”

And although it’s unclear how it even relates to labour unions, the lobby group also takes aim at one minister’s experience as Executive Director of the BC Civil Liberties Association.

On Twitter, the ICBA’s head of communications suggested this was because his “civil liberties record” puts him at odds with “police officers.”

GIven his Pivot/Civil Liberties record, our new AG will give police officers across BC the Eby-Jeebies. #bcpoli #seewhatididthere https://t.co/4Cpk2Ga6Db

In April, the ICBA announced it had hired Jordan Bateman, former BC Director of the right-wing Canadian Taxpayer Federation, as the lobby group’s new Director of Marketing and Communications.

Bateman is also known for his role in the Metro Vancouver transit plebiscite, during which time he was accused of using the debate to push a right-wing ideological agenda and also playing fast and loose with facts.

How dare you call us a union! That might be the offensive thing we’ve ever been called on social media.

According to an analysis by the Vancouver Sun earlier this year, the construction industry has been one of the biggest contributors to Christy Clark’s BC Liberals – eight of the BC Liberal’s top 10 donors have links to construction.

Horgan’s new government recently reiterated that “one of our first acts“ will be through a ban on corporate and union donations, putting an end to Clark’s “Wild West” campaign finance system that allowed her party to collect tens of millions each year from corporations and business lobbyists.