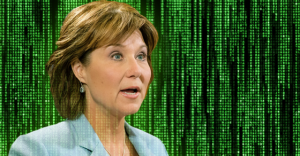 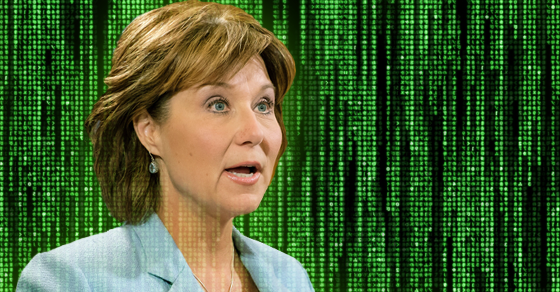 BC Premier Christy Clark alleges, without evidence, that the NDP ‘hacked’ her party’s website

Presenting no evidence in support of her allegations, Christy Clark accused the NDP of "trying to hack" the BC Liberal website.

British Columbia Premier Christy Clark is pretty sure she’s the victim of an NDP cyber attack.

Amid suggestions Clark’s team doesn’t know what they’re talking about, the Premier directly accused the BC NDP of “trying to hack” the BC Liberal’s website but presented no evidence in support of her allegation.

During an interview with The Province newspaper Wednesday, journalist Vaughn Palmer questioned Clark about her belated decision to stop receiving a $50,000 salary top up from her party – widely criticized as a conflict-of-interest. After claiming nothing was wrong with the stipend in the first place, Clark’s answer took an unexpected turn to the topic of Internet hackers:

“You know, the NDP have said it’s going to be the ugliest, dirtiest campaign that we’ve ever had, we saw them trying to hack into our website the other day.”

After Palmer pointed out Clark’s own team has leaked classified documents belonging to her political opponents, Clark doubled-down and suggested – without any proof – that the NDP may have broken the law:

“Hacking into websites is illegal. If somebody gave you information from the NDP, you would use it, you would publish it because that’s not illegal. But hacking into websites with malicious intent is against the law. Now, they haven’t exactly admitted that that’s what they’ve done … You know, if John Horgan wants to run a dirty campaign, it’s up to him to do that and he’ll have to make that choice.”

But before you go and call 9-1-1, it’s worth noting Clark’s story has some pretty serious holes.

1 – What Premier Clark did in accusing the NDP of a criminal act (hacking into Lib party computers) with zero evidence is an outrage.

The “stolen” private info from the “hacked” B.C. Liberal website was publicly available on the site this morning. Column coming. #bcpoli https://t.co/7sIOIXIEoo

As The Province’s Mike Smyth explains:

“This all started when I told you how I had been able to look at a document on the Liberal Party’s website entitled ‘Generated Leads’.

It was a spreadsheet showing the private email addresses of about 100 people who responded to a Liberal Party survey. Their survey responses were included on the document too.

The critical thing to note here is that this document was openly available on the Liberal website under a section of the site called ‘uploads’. The information was available without entering a user name or password. It was there and available for anybody who could click a mouse.

This is the website address where the private information was stored: www.bcliberals.com/wp-content/uploads/“

For their part, the BC NDP reject Clark’s suspicions of NDP cyber warfare and instead suggest Clark’s team probably posted the document on their own website by accident:

“Instead of admitting they mistakenly posted this document themselves, Christy Clark’s team is making completely unfounded allegations about being hacked.”

Clark’s direct accusation comes on the heels of BC Liberal Party spokesperson Emile Scheffel’s less definitive statement a day earlier that “the BC Liberal Party was the subject of a targeted hack,” although he would only blame unnamed “opponents.”

And, to reiterate, the spreadsheet Scheffel claimed was “hacked” was already publicly available on the BC Liberal website.

2/ Over the weekend, https://t.co/fgfXefvCeQ was hacked. Info from grassroots supporters for our VI platform consultation was stolen #bcpoli

The spreadsheet in question contained data from a survey titled “what are your big ideas for Vancouver Island?” asking local residents what they think about the Liberal platform.

Despite claiming the NDP are risking serious jail time to obtain the otherwise innocuous data, it seems a document showing feedback on the BC Liberal platform is still available online – you can read it yourself by clicking here.

And according to that document, it doesn’t sound like people on Vancouver Island are very impressed with Christy Clark’s BC Liberals:

“Being a widowed 70 year old my biggest problem is getting a seniors home … which I will need soon or later … that is priced within my income range … the ones available now are very nice, but cannot be afforded by most elderly widowed seniors.”

“I am outraged that you have placed a low barrier shelter 20 feet from an elementary school and child care facility without public consultation.”

“We need a new government, one that treats ferry-dependent islanders with the same respect and consideration given to transit users in other parts of the province. Does the Premier or the Transportation Minister have the slightest idea how much money Gulf Island residents give to BC Ferries?”

“What are your thoughts on public funds being used to sue and silence a ferry critic? That is what they did! Fix ferries or it is NDP.”

UPDATE: During an interview Wednesday on Victoria’s CFAX 1070, Clark shrugged off questions about her hacking allegations by suggesting British Columbians aren’t interested in “inside baseball”:

.@christyclarkbc says ppl don’t care about inside baseball when asked about her saying the @bcndp hacked @bcliberal computers. #bcpoli

Meanwhile, BC NDP leader John Horgan said Wednesday his party will be considering its legal options if Clark does not retract her allegations and apologize:

#Breaking @bcndp ldr @jjhorgan says Premier @christyclarkbc should apologise & if she doesn’t then the party will look at its legal options.