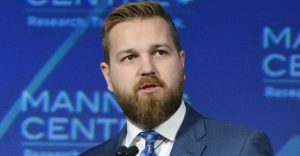 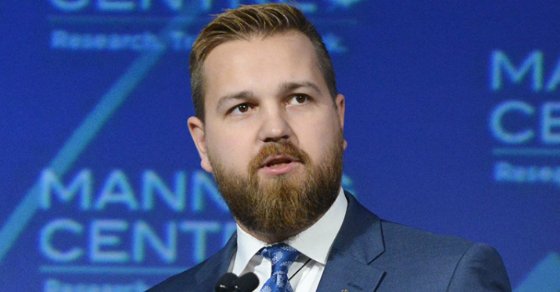 Fildebrandt told the educator, who has received 60 community service awards, he does "more harm than good for the LGTBQ community."

Alberta’s United Conservatives are less than three days old, yet the new party is already going off the rails.

Fildebrandt also told Wells – who has received over 60 awards for his research and community service and founded several public education initiatives on LGBTQ issues – that he is doing “more harm than good for the LGTBQ community.”

Your identity politics do more harm than good for the LGTBQ community as you try to politicize sex & love. #ableg https://t.co/Mcjw66ScXI

The party that wants to force schools to inform parents if their kids join a GSA is now teaching us about LGTBQ politics. pic.twitter.com/IinkrIPL1p

Thank you Derek Fildebrandt for putting all of us LGTBQ people in our place. No more advocacy on our own behalf until he tells us it’s okay! https://t.co/zFEM18L4gm

If there is one thing Derek Fildebrandt knows, it’s what’s best for the LGBTQ community #ableg https://t.co/CXETLyL1Pi

During a press conference Monday, Cooper acknowledged his past work with Canada Family Action, a group that has a long history campaigning against LGBTQ rights, but suggested his views on homosexuality have evolved:

“I think there were lots of things I didn’t understand then, that I know now.”

However, when a reporter asked if he could list one “example of something you have learned over that time,” Cooper stuttered for several seconds before offering this reply:

“I think the changing opinions of culturally generally, I think that, I guess I get back to, I don’t know if there’s a specific point that I would point back to.”

Wells told PressProgress that despite Fildebrandt’s accusations, he views the controversy through the lens of “human rights,” noting that “the Wildrose party has historically had many challenges articulating its position and policies on LGBTQ and human rights issues.”

“The election of this new interim leader does little to alleviate these concerns and raises important questions about the new United Conservative Party’s position on LGBTQ issues, women’s rights, and human rights.”

As PressProgress first reported this week, Cooper hosted a radio show during his time at Canada Family Action, exploring “many issues facing the Canadian family,” including interviews with “some of Canada’s most influential social conservative thinkers.”

One of Cooper’s guests included a controversial author who authored a book that warns of a “homosexual agenda” whose “goal” is to “replace Judeo-Christian sexual morality” and unleash “destructive” forces on “Western Civilization.” The same author had previously advised the Ugandan government on legislation proposing the death penalty for homosexual acts.

Fildebrandt previously made headlines last year when the rookie MLA tweeted that he doesn’t care about “social issues,” explaining that he finds the topic “stale.”