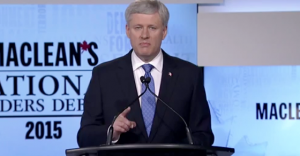 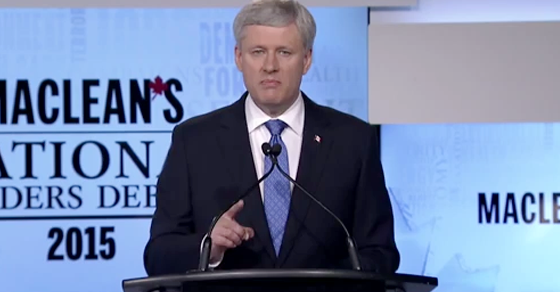 If you thought there was a lot of truthiness flying around at the first debate of the election, you are not alone.

Here are seven of the biggest factual errors made by Stephen Harper at Thursday’s debate:

1. “The reality” is Harper doesn’t have a balanced budget

On two separate occasions during the leaders debate, Stephen Harper claimed Canada has a balanced budget.

“We have a budget that is balanced now and other countries don’t,” Harper said, later explaining “the reality is the figures out of the Department of Finance show that so far this year we are substantially in surplus.”

Unfortunately for Harper, the Finance Canada report he referenced only looks at  April and May. Another report from the Parliamentary Budget Officer looks ahead and takes into account dire new projections for the Canadian economy released by the Bank of Canada.

The PBO’s projection says Canada will not balance its budget and will run a deficit of $1 billion this year, meaning Harper will run his eighth deficit in a row.

2. “The rest of the economy” is not growing Did you miss this one?

This is false. According to the latest data released by Statistics Canada just last week, the biggest contraction in the economy is not happening in the energy sector — it’s happening in the manufacturing sector.

Sharp declines in manufacturing, energy, utilities and wholesale trade (along with finance and the public sector) caused the economy to contract by 0.2% in May, while only construction, retail and “others” saw any growth.

Meanwhile, new job numbers released Friday by Statistics Canada show Canada lost 8,300 jobs in construction last month, 4,600 jobs in manufacturing and 2,000 jobs in the energy sector, although these have been off-set by new jobs in the service industry. What goes down must go up? How’s that for magical thinking!

During the debate, Harper said “the reality is” thanks to his government’s corporate tax cuts, Canada’s “tax revenues actually went up from the business sector.”

Yet as the chart below shows, corporate tax revenue (blue bars) is nowhere near what it was before Harper began slashing taxes for corporations. 4. Harper’s backbenchers are operating “more freely” than ever?

Although Harper’s former backbenchers claim he’s so controlling they’re treated like “trained seals,” Harper insists he allows them to operate “more freely” than MP’s have been allowed in decades.

How free are they? Judging by this video, it seems Conservative MPs even have the freedom to monotonously read the exact same words into a video camera:

5. “Greenhouse gas emissions have actually gone down.” Until they went up again. Harper also responded to criticism of his environmental record (the worst in the industrialized world, by the way) by claiming “greenhouse gas emissions have actually gone down.”

Depends how selective you are. GHG emissions did go down following the 2008 recession, but then they started going back up when the economy started picking back up. All things considered, as the Harper Government’s own data shows, Canada is still well below the Copenhagen Accord target Harper himself agreed to back in 2009: 6. Harper’s own chart shows Canada does not have the “strongest employment growth in the G7” Harper also claimed Canada has “the strongest employment growth in the G7.” Is that true?

According to a chart in Harper’s own budget document, the U.S. has had stronger “growth in employment” than Canada: On the other hand, Canada placed first in terms of growth of the labour market, but with a -0.1% growth in the employment rate, Canada places fourth in the G7 on this more important metric.

Harper could also brag about having the fifth lowest (or third highest) unemployment rate in the G7, but that would complicate his story.

And how does Harper’s performance stack up against past Prime Ministers? It turns out Harper has the weakest job creation record of any Prime Minister since 1946:

7. Northern Gateway’s environmental assessment was so thorough, 300 scientists complained it was only “five short paragraphs” How rigorous was the Northern Gateway pipeline project’s environmental assessment?

Well, 300 scientists signed a letter that accused Northern Gateway’s Joint Review Panel of only weighing the “economic benefits” while taking a “narrow view of the environmental risks and costs.”

That and the Panel’s review of the “environmental burdens” were only “five short paragraphs” long.

And all this after misleading PR campaigns, Harper’s ministers labeling critics as ‘radicals’, and the Conservative government tabling reports that claimed fossil fuels improve air and water quality.