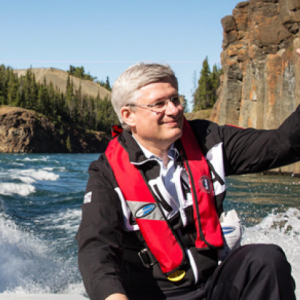 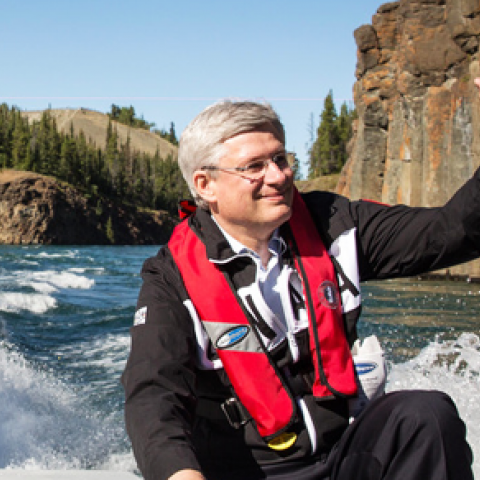 It’s that time again: Stephen Harper’s Arcticpalooza 2014! The kick-off on Thursday means you’ll be seeing lots of publicity photos of the Prime Minister in Canada’s North this week. Here are 6 things to keep in mind during Harper’s photo-ops: 1. The environment: a great backdrop until it melts The North offers many stunning backdrops […]

The kick-off on Thursday means you’ll be seeing lots of publicity photos of the Prime Minister in Canada’s North this week.

Here are 6 things to keep in mind during Harper’s photo-ops:

1. The environment: a great backdrop until it melts

The North offers many stunning backdrops to juxtapose Harper with the majesty of Canada’s raw, untamed wilderness that gives our nation’s leader the aura of a rugged, intrepid frontiersman.

But it’s hard to believe someone is so attuned to nature when they’re also muzzling climate scientists and shutting down the distant early warning detectors of climate change in the arctic.

Just two years ago, Harper axed Canada’s Polar Environment Atmospheric Research Lab (PEARL) on Ellesmere Island whose focus was on climate research and helped discover the first hole in the ozone layer above the arctic in 2011. At a cost of $1.5 million per year to operate and producing a treasure trove of internationally recognized data on climate change, the lab offered Canadians and the planet a huge return-on-investment.

Harper cut it anyway. But hey, at least the photos turned out great: “The creation of this new national park reserve will further protect the rich natural wonders and cultural heritage of Canada’s sovereign North,” Harper said at the establishment of the Nááts’ihch’oh National Park Reserve in the Northwest Territories back in 2012. Not only that, the new park would “generate employment for those living in the Northwest Territories” and “contribute to the stewardship and conservation” of the park’s lands and waters.

It made for a great photo-op.

The only problem was the 2012 federal budget called for the elimination of 638 jobs at Parks Canada. More than half of Parks Canada employees in the Northwest Territories alone received layoff notices.

Bonus: we allow mining for zinc within the watershed of the South Nahanni River on the edge of the Nahanni National Park. 4. Appearing to “get” First Nations:

Harper’s Arctic tours always include a quick nod to Canada’s First Nations. While acknowledging Canada’s indigenous cultures is a nice gesture, it stands in stark contrast with the rising tensions between the government and First Nations in recent years.

And there’s plenty of reasons why we’ve reached this point: Sometimes Harper likes to pose for the cameras on the backs of snowmobiles and ATVs when he’s up North. Ever wonder why?

Since 2009, the Conservatives have pumped tens of millions of dollars into snowmobile clubs and building more snowmobile trails, something that earned him the President’s Award for Excellence in Leadership from the Canadian Council of Snowmobile Organizations in 2011.

“The heart of Canada is still in the countryside,” Harper said in his acceptance speech, praising the “timeless values of rural life.”

It almost sounds (and looks) like something Harper thinks a rural voter would like to hear, eh? And no Stephen Harper trip to the Arctic is complete without contrived displays of patriotism.

Many have noted Harper’s tendency to “wrap himself in the flag” and accused the Conservatives of “appropriating … national symbols” as a strategy aimed at making the Conservatives and Canada appear as if they’re one in the same.

“It does, however, serve an important political objective,” columnist Andrew Coyne observed during Harper’s 2008 sojourn to the frontier. “Namely, as part of the Conservatives’ efforts to rebrand themselves as the Canada Party, or perhaps redefine itself: to devise an alternative language and symbology of patriotism to the one so successfully exploited over the years by the Liberals.” Photos: pmwebphotos. Used under a Creative Commons BY-2.0 licence.