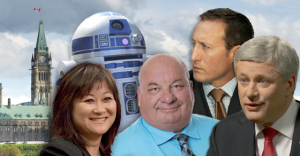 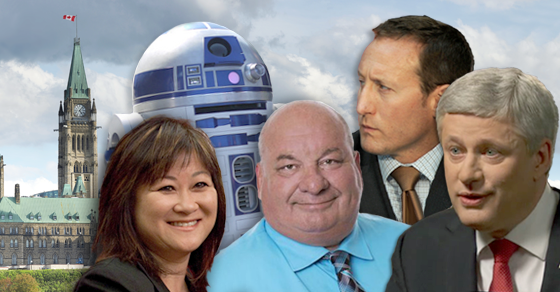 5 times PressProgress made big headlines across Canada in 2015

Last year, the Canadian Press named us a top digital media outlet that's "changing the political landscape." How did we do this year?

Last year, the Canadian Press named us as one of the top digital media outlets that are “changing the political landscape” in Canada.

So, how did we do this year?

Here are some of our biggest stories that made headlines across Canada in 2015:

She also claimed CSIS had advance knowledge of the 1985 Air India bombing but didn’t act to stop the tragedy (a claim that has absolutely zero factual basis) and declared, “I do not read the newspapers anymore because most of the facts in there are not factual.”

2. “Stay the hell where you came from”

Earlier this year, PressProgress was first to shine a light on Conservative MP Larry Miller’s statement that Mulsim women should “stay the hell where you came from” if they didn’t like the Conservatives’ (failed) attempts to ban niqabs from citizenship ceremonies.

Those comments made headlines across Canada. And during the August 6 leaders debate, it even prompted NDP leader Tom Mulcair to tell Conservative leader Stephen Harper that it’s “reprehensible and beneath the dignity of a Canadian Prime Minister” that he signed Miller’s nomination papers:

Back in February, PressProgress reported on Peter MacKay’s appointments of several donors, friends and wedding guests – including the best man at his wedding – to the Nova Scotia Supreme Court.

That made headlines and led to this exchange on CBC’s Power and Politics:

4. Bill C-51 and the use of “terrorist propaganda” in Conservative ads

That led to headlines over at CTV News and Maclean’s. It even set the stage for one of the 2015 election’s most surreal moments when Harper spokesman Kory Teneycke defended the use of ISIS propaganda videos in Conservative ads and stumbling when Global’s Tom Clark asked why it didn’t contravene C-51:

5. And our stories made a big impact during the 2015 Election

• Our super-cut video of just how robotic Conservative back-benchers have become went viral, becoming a top story on the Toronto Star and viewed by over 100,000 people in one day alone.

• Taxpayer-funded 24/Seven promotional videos appeared on the Conservative Party website during election campaign – and after we reported on it, they took them down. Liberal leader Justin Trudeau even scolded Harper over that in the middle of a leaders debate.

• Laureen Harper told a Conservative rally she supports a marijuana policy that sounds more like decriminalization than the Conservatives’ hardline drug policy, sparking headlines and even a debate on CBC’s Power and Politics.

• Conservative candidate Marilyn Gladu’s social media posts showed she wasn’t very happy with the idea of keeping church and state separate, also that Muslim immigrants “want to kill everyone.” That too made headlines, including in her local newspaper.

We reached millions of Canadians and made big headlines across Canada in 2015.

And we did all that without the staffing, resources and budgets Canada’s major media outlets enjoy.

Help us expand so we can cover more stories you care about.