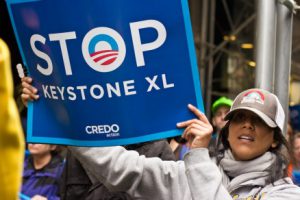 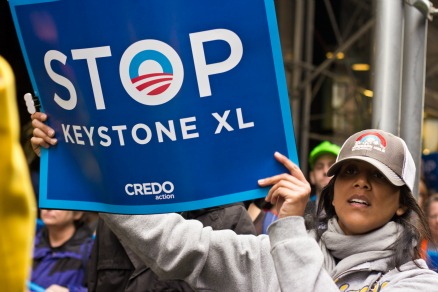 Something to keep in mind in the TPP debate...

In retaliation for President Obama’s rejection of the Keystone XL Pipeline, Canadian company TransCanada is suing the U.S. government for a whopping $15 billion.

The company’s complaint? That the rejection, widely applauded by environmental groups, violates the North American Free Trade Agreement’s (NAFTA) rules and cuts into its profits. “TransCanada has been unjustly deprived of the value of its multibillion-dollar investment by the U.S. administration’s action”, it said in a recent release.

The lawsuit was filed under Chapter 11 of the NAFTA which deals with the investor-state dispute process. Critics of NAFTA have long warned that the process for resolving disputes between investors and governments put corporate profits ahead of public and civil society interest – especially when it comes to the environment.

Many, including Nobel Prize-winning economic Joseph Stiglitz and US Senator Elizabeth Warren, are raising similar concerns about the Trans-Pacific Partnership (TPP) and its own investor-state dispute settlement tribunals.

Given TransCanada’s lawsuit over Keystone – and with the TPP set to be debated soon in Parliament – now is a good time to remember just a few of the times Canada has been sued under Chapter 11 of NAFTA for trying to protect the environment (a full list of Chapter 11 lawsuits has been compiled here by the Canadian Centre for Policy Alternatives).

Having banned MMT, a chemical additive to gasoline suspected of being a neurotoxin capable of causing severe health risks such as Alzheimer’s disease, the Canadian government was forced to pay $13 million USD in an out-of-court settlement in 1997.

Ethyl, the Virginia-based company exporting MMT to Canada, forced the settlement by threatening a lawsuit against the Canadian government – saying that its commercial rights had been “expropriated” by the ban.

In 1998 the US toxic waste disposal company challenged a temporary ban on exports of PCBs.

Despite the Canadian government’s argument that it was bound to ban the export of PCBs by international treaty, a NAFTA tribunal ruled that the ban violated Chapter 11 and awarded S.D. Myers some $5 million in damages plus interest.

The same year American water giant challenged British Columbia’s water protection legislation along with its moratorium on exports of bulk water from the province, making a claim to NAFTA under Chapter 11’s “expropriation” clause and demanding $10.5 billion.

A Canadian company had planned to dispose of Toronto’s municipal waste by dumping it in a huge, artificial lake located at the site of the former Adams Lake Mine in Northern Ontario. But in 2002 the deal went South…literally.

The company allegedly transferred control of the project to a numbered company involving American citizen V.G. Gallo. In June 2004, the newly elected Ontario government enacted legislation to stop the project from moving forward by banning the dumping of garbage into the province’s lakes.

Gallo claimed under Chapter 11 that the dumping ban amounted to “expropriation” and sued for $105 million.

The American corporation proposed to build a massive quarry and marine terminal on the Digby Neck, an environmentally sensitive part of southwestern Nova Scotia.

In 2007, a joint federal-provincial environmental assessment panel recommended the project be rejected due to its likely adverse environmental impacts. Both the Canadian and Nova Scotian governments informed Bilcon that they were rejecting the proposed quarry and terminal.

Bilcon Inc. then filed for more than $100 million in damages under Chapter 11.

According to the Canadian Centre for Policy Alternatives, about 40% of legal challenges to government policy that have been filed under NAFTA’s Chapter 11 have been against environmental policies.  Most recently, Ontario was sued by Texas-based company Mesa Power Group, LLC over its Green Energy Act.

As Canada’s debate over the TPP -and its investor-state dispute rules and tribunals- heat up, Canadians should keep this history in mind.