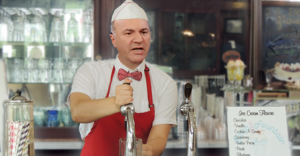 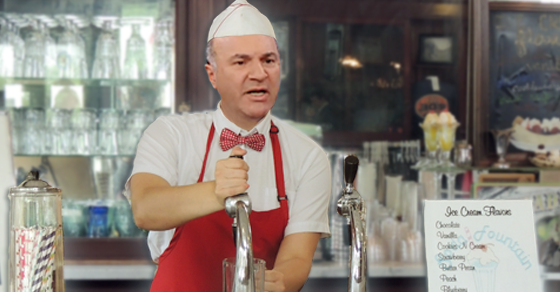 5 signs Kevin O’Leary is not qualified to work at an ice cream parlour, let alone be prime minister

If Kevin O'Leary was held to the same standard as a high school student, he'd be lucky getting hired at Baskin Robbins.

In fact, if O’Leary was held to the same standard as a high school student, he’d probably be lucky getting hired at Baskin Robbins.

No, seriously – O’Leary says he was once fired from a job scooping ice cream, which he says was “pretty well the only job I’ve ever had.”

1. Kevin O’Leary screwed up his résumé

O’Leary officially launched his leadership campaign Wednesday, but he forgot one important detail before throwing his hat in the ring.

Updating which country he lives in on his online résumé:

Of all the days to not update the Linkedin profile. pic.twitter.com/CewDgyGzyF

Though a short time later, O’Leary made some changes to his resume:

The businessman and television personality moved to Boston, Massachusetts in 1994 and admits he now “spends most of his time there.” He’s been known to say: “Boston is my home.”

Not to mention, O’Leary prefers spending Canada Day down in Nantucket where he can celebrate “magical” fourth of July weekends. Nothing helps you get a job like glowing words from old coworkers vouching for your character.

“At his core, he’s an opportunist. He doesn’t do anything that doesn’t offer a path to power … Like all opportunists, Kevin shifts positions when it’s convenient.”

And she added this about O’Leary’s business experience too:

In the workplace, O’Leary’s communications style might be a giant headache for most HR departments.

• There was the time O’Leary declared it was “fantastic” that the world’s 85 richest people are wealthier than 3.5 billion people living in “extreme abject poverty.”

• There was the time O’Leary vowed to jail unionized workers if he’s ever elected prime minister:

“Here’s the right thing to do: elect me as prime minister for 15 minutes. I will make unions illegal. Anybody who remains a union member will be thrown in jail.”

• There was the time O’Leary suggested unemployed workers, largely from the Maritimes, had infected Alberta with “socialism.”

• There was also the time he advised a business student worried about work-life balance to dump his fiancé, because when you’re wealthy, you can have “many girlfriends”:

Kevin O’Leary’s advice to students: if you’re wealthy, you can have ‘many girlfriends’ https://t.co/9rp04GDKaO #cdnpoli #canpol #cpcldr pic.twitter.com/SXgTI9aRN0

Shouldn’t the prime minister have some basic grasp of how Canada’s institutions work?

O’Leary has previously proposed a “yes or no” referendum on all pipelines – something that’s probably illegal and a vote O’Leary has a realistic shot at losing.

And earlier this week, O’Leary floated an unconstitutional idea to CTV News about auctioning off Senate seats to wealthy bidders who would have the power to veto bills passed by the democratically-elected House of Commons:

“I don’t know why we can’t have a hundred thousand or a couple hundred thousand committed each year per senator … Instead of being a cost centre to Canada, why can’t it be a profit centre?”

What could possibly go wrong?

5. Kevin O’Leary may not be competent for the job

Hope he plans on leaving his Celebrity Jeopardy appearance off his résumé: