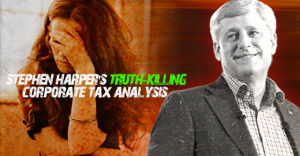 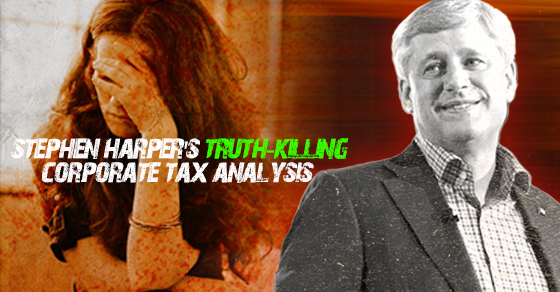 Stephen Harper would like you and your loved ones to be very, very scared about corporate taxes!

Stephen Harper would like you and your loved ones to be very, very scared about corporate taxes!

According to the Conservatives and others opposed to raising the corporate income tax (CIT) rate so Canada can invest in other areas, the apocalypse awaits us all if Corporate Canada’s taxes on their profits go up by two percentage points to 17%

And to really underline their point, the Conservatives used this image below of a distraught woman who looks like she is experiencing a really uncomfortable skin rash. Ouch! Harper’s hysteria is based on a study by right-wing economist Jack Mintz, who actually argues that the corporate income tax rate should be cut another 2% (from 15% to 13%). Raising it by that same number to 17%, argues Mintz, would cost the economy 150,000 jobs.

Unfortunately for Mintz – whose share holdings from sitting on two corporate boards (Imperial Oil and Morneau Shepell) are valued at $1.86 million – the evidence tells a different story.

1. Corporate taxes are one of many factors creating or killing jobs

Mintz himself admits corporate tax rate is one of many factors influencing whether jobs will be created or lost.

“Various factors affect investment besides taxation‎,” Mintz said in an opinion piece earlier this year, “including growth in demand for goods and services.”

“The amount of jobs that (a tax increase) creates or loses is dwarfed by everything else that is going on in the economy,” agreed Ivey Business School professor Mike Moffatt.

One thing Mintz doesn’t take into account is the “multiplier effect” of corporate tax revenues and the spending they pay for.

In other words, the increased revenue collected in corporate taxes doesn’t simply vanish into thin air: it gets invested in things like public transit and childcare. That creates jobs and is a smarter investment than a tax-giveaway.

The Conservatives’ own 2009 budget took into account this very same CIT multiplier effect on page 240: And what have Canadian corporations been doing with their cash? They’re sitting on record levels of it on their balance sheets and Canada ranks last in business investment in R&D. Far from stimulating it, business investment in machinery and equipment has fallen to less than 5% of GDP.

What’s more, Corporate Canada’s hoard of “dead money” has more than doubled since 2005, earning Canada criticism from the IMF, which warns the idle piles of cash mean “Canadian firms may be missing on productive investing possibilities.”

What was that about corporate tax cuts stimulating investment again?

While insisting that raising corporate taxes will have a massive impact on employment, right-wingers like Mintz argue in the next breath that it won’t actually do very much.

Mintz argues that a 2% hike of the federal CIT won’t generate the revenue its proponents expect. In 2010, he claimed that reducing the CIT from 18% to 15% would have a “relatively small” impact on the revenue generated for government.

But according to the non-partisan Parliamentary Budget Officer, cuts to the CIT between 2006 (set at 22.1%) and 2015 (cut to 15%) have cost the federal treasury an estimated $12 billion annually.

The result has been a huge loss of public revenues with no meaningful economic gain.