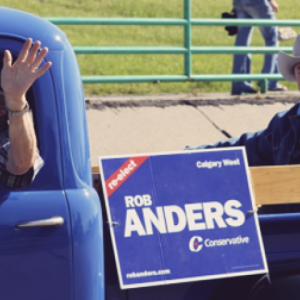 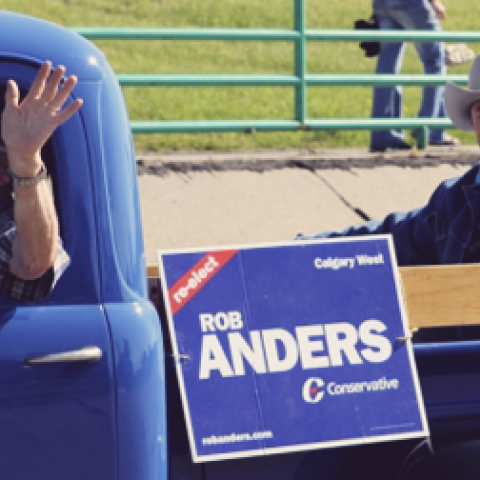 Stephen Harper’s man, Rob Anders, had a rough weekend, losing his bid to be the Conservative Party’s candidate in the new riding of Calgary-Signal Hill. And unless his two well-placed endorsers, Harper and Conservative heavyweight Jason Kenney, use their clout to secure Anders a spot in another Calgary riding, the “chronically controversial” MP will be gone from the House of Commons […]

Stephen Harper’s man, Rob Anders, had a rough weekend, losing his bid to be the Conservative Party’s candidate in the new riding of Calgary-Signal Hill.

And unless his two well-placed endorsers, Harper and Conservative heavyweight Jason Kenney, use their clout to secure Anders a spot in another Calgary riding, the “chronically controversial” MP will be gone from the House of Commons after the 2015 election.

The six-term MP, first elected as a Reform MP in 1997, earned the moniker “Canada’s worst MP” for his jaw-dropping performances over the years.

Here are 10 reasons why that tag is bang on.

Keep in mind that Harper described Anders as a “valued member” of his team in his endorsement of Anders in the nasty nomination battle. “The Road to 2015 is one that needs strong, stable leadership and I’ve been able to count on Rob to get real results for his riding and our country,” said Harper. And in his endorsement, Kenney praised Anders as a “consistent and principled supporter of our fight for lower taxes.”

In 2001, Anders was the sole MP to oppose granting former South African President and anti-apartheid leader Nelson Mandela honourary Canadian citizenship. Mandela was a “communist and a terrorist,” said Anders.

“He’s the politically correct kind of ‘lib’ left poster-boy of today … I would say that 30 years from now Nelson Mandela will not be lionized as much as he is today.”

(Twelve years later, while the world recalled Mandela’s accomplishments after his death, Anders doubled-down on his opposition to Mandela.)

In 2003, while debating the Assisted Human Reproduction Act, Anders drew a connection between abortion and Canada’s refusal to participate in the Iraq War in a failed attempt to have cut funding for abortions:

“I find it ironic that there can be such concern with regard to the people of Baghdad yet when it comes to Canada’s littlest citizens, there is not that type of concern … As a result there will be people who may never sit in this place but will never get the chance … It is profoundly ironic that some people are very upset about some nature of death but not others. It is interesting.”

In 2005, during a Parliamentary debate on the Civil Marriage Act, Anders explained his opposition to gay marriage with a weird comparison to the fall of the Roman Empire.

“Edward Gibbon goes on in his work, the Decline and Fall of the Roman Empire, to cite several things that made for the decline of the Roman Empire. One of those, the first that he cites, was the immorality that destroyed the integrity of family life.

It is important to note that before the Punic Wars against Carthage, polygamy was unknown among Romans, Athenians and the Jews, but in the later stages of the empire, a loose marriage contract made religious and civil rights nonessential.

In three centuries of prosperity and corruption, this principle was enlarged to frequent practice and pernicious abuse. Passion, interest or caprice suggested daily motives for the dissolution of marriage, a word, a sign, a message, a letter, even the mandate of a freed man, declared the separation of a marriage. It no longer had any bearing.

The second thing that Gibbon talks about is gender confusion and the problems that had in the Roman Empire. The third is disregard for religion. I think we can see some parallels today. …

Julius Caesar in 59 BC offered rewards to Romans who had many children. He forbade childless women to ride in litters or wear jewellery. It sounds pretty stark in today’s climate but, nonetheless, he understood the importance of family …

I would go on to talk about Diocletian, for I think I would wrap up with him, but I have only a minute left.

There are things we can learn from history. I only wish that my colleagues across the way, rather than referring to modernity and some of the modern philosophies, would instead refer to 6,000 years of written human history and observe closely what ramifications changes to law have had.

If they did that, if they read Toynbee, Durant and Gibbon, if they read some of these people who were the saviours of those civilizations, they would understand that this type of action undermines civilization and disintegrates it.”

In 2008, Anders compared the Beijing Olympics to the 1936 Berlin Olympics:

5. Fell asleep on the job

In 2012, Anders found himself on the defensive after he was accused of taking naps in Parliament and during committee meetings with veterans’ groups.

Rather than apologize, Anders lashed out and accused the veterans of being “NDP hacks” who were running a smear campaign against him.

“He was out like a light for about five minutes,” one veterans’ advocate said. “He came in late didn’t ask any questions and then fell asleep. Wow… I couldn’t believe my eyes.”

6. Pushed a conspiracy theory about the death of Jack Layton

“That’s insane,” remarked NDP MP Peter Stoffer at the time. Is the guy just that stupid or is he that stupid.”

7. Accused the Opposition of wanting to inject heroin into the veins of children

Watch this remarkable speech from 2013.

8. Shot zombies and terrorists at the shooting range

The day before losing the nomination battle on Saturday, Anders pledged: “First, I want to balance the budget by a year from now, and then push hard to reduce the GST further to 3%, and extend income-splitting to all Canadians.”

The Parliamentary Budget Office calculates each percentage point cut in the GST represents $7 billion in lost revenues for the public treasury. (Harper has already cut the GST from 7% to 5%, considered “among the worst possible tax cuts to boost productivity” that comes at a huge fiscal cost.)

10. Worked as a professional heckler in his pre-Parliamentary career