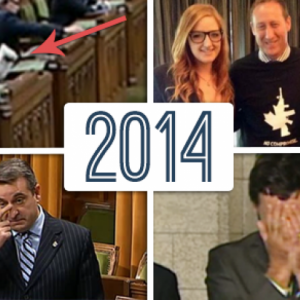 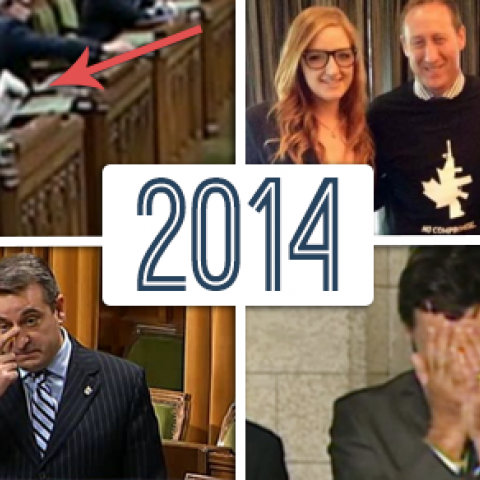 10 moments in 2014 that capture who the Conservatives really are

Here’s a list of 10 moments in 2014 that capture everything that’s wrong with Canada’s Conservative government:   1. “What the frig is wrong with” Julian Fantino? Heard something about veterans being mad at Conservatives this year? This video, shot after Minister of Veterans Affairs Julian Fantino skipped out on a meeting about the closure […]

Here’s a list of 10 moments in 2014 that capture everything that’s wrong with Canada’s Conservative government:

1. “What the frig is wrong with” Julian Fantino?

Heard something about veterans being mad at Conservatives this year?

This video, shot after Minister of Veterans Affairs Julian Fantino skipped out on a meeting about the closure of veterans offices, shows why. (To make matters worse, Veterans Affairs has underspent a staggering $1.1 billion since 2007, even as 40,000 veterans returned home from Afghanistan. The bulk of these savings have come directly out of veterans’ death and disability compensation.)

Veteran Alfie Burt puts it best: “What the frig is wrong with that guy?”

2. Leona Aglukkaq ignores questions about people in her riding looking for food in the local garbage dump

Environment Minister (and Conservative MP for Nunavut) Leona Aglukkaq was caught on camera reading a newspaper in the House of Commons — while ignoring questions about impoverished constituents scavenging for food in the Rankin Inlet garbage dump:

After the story went viral, Aglukkaq went into damage control mode and explained her side of the story to CBC News. In that interview, Aglukkaq rationalized reports of people looking for food as simply an example of how people in the North let nothing go to waste:

3. MP didn’t read report about why 47 people died in horrific explosion, but he’ll talk about it on TV anyway

Although 47 people lost their lives in the Lac-Mégantic explosion, Conservative MP Jeff Watson, who is also Parliamentary Secretary for Transportation, refused to take responsibility for “ignoring warnings” that led to the disaster because he hadn’t “had a chance to read the report.” The Transportation Safety Board’s had been available all day.

Watson later clarified he at least “downloaded” the report: Instead, it turned out Oliver’s “job creation” plan actually gave businesses an incentive to fire workers. And the $550 million scheme will only create 800 jobs, working out to $687,500 per job.

It later turned out Oliver’s plan was based entirely on math provided by a business lobby group. Conservatives in 2014 borrowed a page from the American Tea Party’s anti-Obamacare playbook to claim the NDP’s $15 per day child care proposal was actually “a crazy scheme to raise your kids for you.”

And despite outrageously expensive child care costs in Ontario, Progressive Conservative leadership candidate Lisa MacLeod claimed creating this “babysitting bureaucracy” would “take our children at six months old” and hand them over to the government so children would be “raised by the state rather than raised by us.”

“They think it is the government’s job to look after your child,” MacLeod said. “And in so doing, they take away your obligations as a parent.”

MacKay got into trouble after PressProgress reported that Justice Minister appeared to be endorsing a gun group that publicly accused the RCMP of conspiring to seize firearms. The same group had previously ssued a bizarre press release calling for looser gun laws while a Moncton shooter wanted in the shooting of three RCMP officers was still on the loose. In the spring, MacKay explained the reason he hasn’t appointed many women as judges is because women “simply aren’t applying.” He elaborated that perhaps it’s because “women have a special bond with their children,” he went on to Mackaysplain. Even though the math behind his plan to create one million jobs was being ripped apart by countless economists, the former Ontario PC leader saw no irony in discussing the urgent need to improve math scores in schools during the Ontario election debate.

9. After dodging questions on a new war in Iraq, Paul Calandra gets emotional

A week of dodged questions about the military intervention in Iraq resulted in Stephen Harper’s Parliamentary Secretary rising in the House of Commons to apologize for his behaviour.

What happened next was emotional:

10. When 9 years of Conservative government were summed up in one animated gif

Paul Dewar and the facepalm heard across Canada: