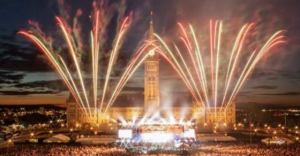 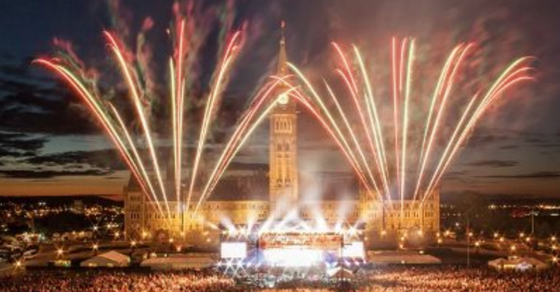 Go grab some fireworks, stumble around in the dark lighting fuses and have a little "unregulated fun" on behalf of the Fraser Institute this Canada Day.

The Fraser Institute has a pretty thought-provoking idea for all of us to contemplate this Canada Day:

Why should the government celebrate Canada Day?

Hmm. Why should the government celebrate the day the Government of Canada was created? Hadn’t thought about that. Good question, Fraser Institute.

According to the right-wing libertarian think tank that puts economic freedom ahead of civil liberties and generally sees little value in the democratic institutions Canadians fought to build, it’s time to stop and think about privatizing our local Canada Day fireworks celebrations.

As the Fraser Institute points out, taxpayers “blow millions in fireworks and flags” every Canada Day even though the same celebrations could be “privately funded,” and they also wonder: “what sort of economic return would those privately spent tax dollars have generated?”

Besides, who needs those stiffs down at City Hall telling us how to have a good time? Anyone can get “a bunch of peaceful people together with a shared desire for fun,” arm them with “super flares and roman candles” and boom: who’s ready to have a little “unregulated fun”?

As the Fraser Institute elaborates:

“Everyone loves a party, and when you get a bunch of peaceful people together with a shared desire for fun, well, you get a party. No government needed. My small town experience offers a great illustration. The fireworks used to happen in random gatherings of private groups around the village. Bob, who ran the hardware store, sent a few off from his barge that was anchored a hundred yards from shore. People thought that was a great idea, so the following year many chipped in to give Bob more money for super flares and roman candles. Sure, there were quite a few damp squids and the occasional grunt of pain as Bob stumbled around, lighting the fuses, in the darkness on his floating barge. But that was part of the fun. The clapping and hoots of support amongst our little group were deafening, and so was the little fireworks display.

But the statists don’t like to see unregulated fun, and what better way of regulating it than ensuring that the government controls how it’s funded? Now, our small municipal government (already grossly indebted) spends tens of thousands to hire a professional fireworks team. There are auto igniters, timers, paired music. The show is truly spectacular, but it lacks the foibles and misfires—the small town charm—of the original displays.”

Sure, maybe those “foibles and misfires” will send Bob to the hospital and maybe too much “small town charm” and “unregulated fun” in a city of one million will lead to chaos, especially if the Fraser Institute ever gets their wish to do away with fire departments too.

So go grab some fireworks, stumble around in the dark lighting fuses and have a little “unregulated fun” on behalf of the Fraser Institute this Canada Day.