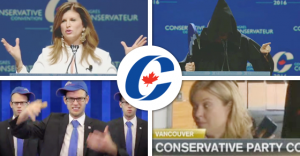 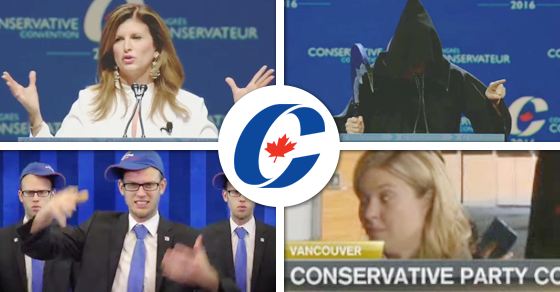 Yep, last weekend’s Conservative Party convention was even more bonkers than you think

The Conservative Party of Canada held its 2016 National Convention in Vancouver last weekend.

The event was billed as “exciting” and something that should be “closely watched.”

And guess what? They were right!

Here are six moments from the Conservative National Convention that really are so bonkers that it’s truly hard not to pry yourself away from watching closely:

How’d she decide to do that? By talking about her admiration for the way Donald Trump has “restored freedom of speech to America”?

Nope. Instead, Gladu just walked out on stage dressed as Death and warned the audience of their impending doom, of course.

Conservative MP Brad Trost reacted to his party’s decision to end its opposition to same-sex marriage and adopt a neutral position on the issue by announcing that he still thinks “homosexual marriage” is wrong and that equality sounds like a “socialist” idea:

“People like me, in the next election, I will say homosexual marriage, gay marriage is wrong. I’ll be public about it … The language of equality and comparisons, to me that’s socialist language, the way they do it. The same way they talk about equality of income where they want a tax from the rich to bring them down to the level of the poor. So I completely reject the underlying philosophy behind this.”

The Saskatchewan MP also added that he is a “big boy”:

“Look, I’m a big boy. I can handle this … For veteran MPs, this is like. Michelle’s a rookie. She doesn’t quite understand what all went into this.”

Conservative MP Michelle Rempel, who supported the motion, has been an MP for half a decade and previously served in cabinet.

Does Conservative MP Deepak Obhrai have “opinions” about Kevin O’Leary?

You better bet your bottom dollar he does!

But if you think he sounds angry, he’s not angry – “there is no anger” in the Conservative Party, Obhrai reminds us.

4. Robert Sopuck: Cutting down trees is “Conservative environmentalism in action”

Conservative MP Robert Sopuck, who does not believe in “doing something” about climate change, also took some time to explain to the audience that few among us have a better understanding of environmentalism than Robert Sopuck.

During a speech highlighting his environmental street cred that included a PowerPoint slideshow featuring photos of the MP standing next to various animals he shot, Sopuck offered the following anecdote to illustrate “Conservative environmentalism in action”:

“That’s me on our farm. That tree, we cut that tree, Caroline and I, in 1987. Another tree has taken its place and our grand daughter Eden in the next five years is going to cut that tree down herself. That’s Conservative environmentalism in action.”

What do we know about newly elected Conservative MP Arnold Viersen?

We know he’s critical of the reproductive rights of women, recently telling an anti-abortion crowd that Canada’s government is the “government of death.” He also has concerns about the effects of pornography on public health.

But this weekend, Viersen also revealed his interest in making amateur rap videos.

And what Conservative gathering is complete without declaring your political opponents effeminate?

“We’re so proud that we’re the party of the first female — you’d think Justin Trudeau was this, but no — actually, we had the first female prime minister: The Right Honourable Kim Campbell.”

Ambrose’s office insists she did not suggest Trudeau is a woman. Hmm.