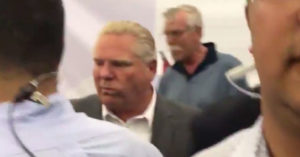 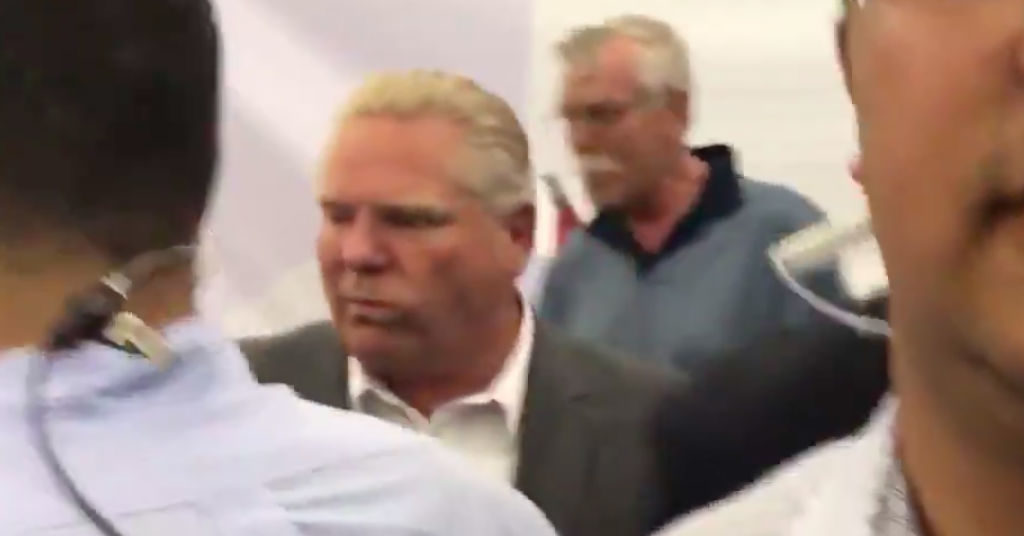 WATCH: Doug Ford dodges journalists before fleeing Brantford event through the back door

"Do you know where he went? Did you guys sneak him out the back?"

The same day Doug Ford faced serious questions about an audio recording that allegedly shows him selling “bogus” party memberships, the Ontario PC leader quite literally fled from journalists at a campaign stop in Brantford.

Physically shielded from the press by political operatives, Ford reportedly spent just over an hour posing for pictures before sneaking out the back door of the venue and being hastily whisked away.

At the event, journalists such as CTV’s Tina Yazdani tried to question Ford but found their efforts rebuffed by his handlers.

I tried asking Doug Ford if he believes he broke any election rules as he arrived in Brantford. He didn’t answer but his rep stepped in: “we made it clear we’re not taking any questions” #ONpoli pic.twitter.com/FUWBPJkZ2f

Reporters then tried for a third time to question Ford, only to discover that the PC leader had fled the scene through the back door.

We were waiting out front for Doug Ford after his Brantford event. But he was snuck out the back. We tried to find him but it was too late. He really didn’t want to take questions today. #ONpoli pic.twitter.com/6NXIhXk6Ss

Here’s an email from the failed candidate (Pina Martino) to Mike Richmond, who served as the PC Party lawyer. Martino says Ford was “following me home” after she left the police station, then “waited in the vicinity of my home and followed me a second time.” pic.twitter.com/XVDuL9sD8Q

Ontarians head to the polls on June the 7th.