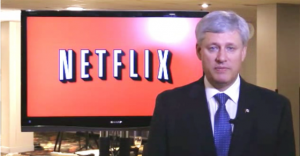 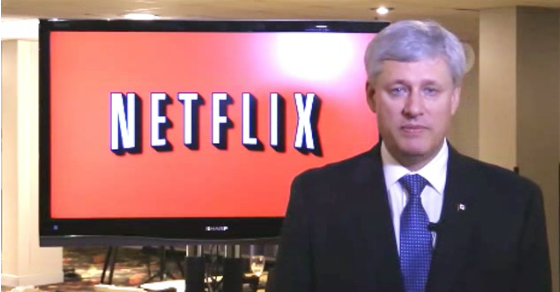 Was Stephen Harper for the Netflix tax before he was against it?

Stephen Harper says he's "100% against a Netflix tax. Always have been, always will be." But is that true?

Stephen Harper says he’s “100% against a Netflix tax. Always have been, always will be.”

But is that true?

On Wednesday, Harper released a video in which he warned the Canadian public that “some politicians want to tax digital streaming services like Netflix and YouTube.”

I love movies and TV shows. I’m 100% against a #Netflix tax. Always have been, always will be #NoNetflixTax #elxn42 https://t.co/oUYgTkXH3q

And elsewhere, Harper’s Conservatives claim “Justin and Thomas Mulcair have left the door wide open” to a “Netflix tax.”

But guess what? Not only have the NDP and Liberals explicitly stated they are not proposing a Netflix tax and have never called for a Netflix tax, in fact, only one federal party has actually opened the door to a Netflix tax.

Citing “a few short paragraphs in the 2014 federal budget,” here’s how the Globe and Mail put it back in January:

“Canada’s government is considering new tax rules to level the playing field for e-commerce vendors that complain foreign giants such as Amazon.com Inc., Apple Inc. and Netflix Inc. have an unfair edge when selling digital products.”

And writing for his blog Thursday, Michael Geist, Canada Research Chair in Internet and E-commerce Law, points out:

“It was the Conservatives that raised this possibility in the 2014 budget, launching a consultation on the issue that garnered supportive comments from companies such as Rogers…”

Despite what Harper says, it looks like he hasn’t always been “100% against a Netflix tax” after all.