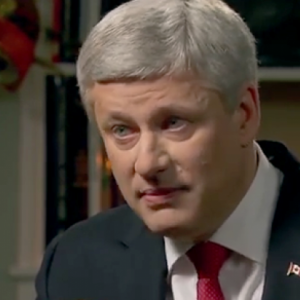 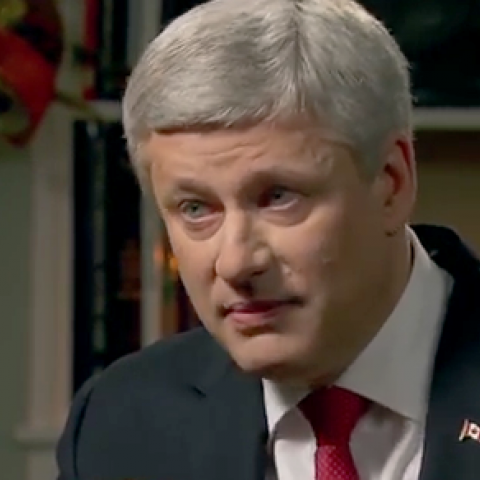 We thought Stephen Harper hit peak “crazy” last week. But the prime minister may have reached a new plateau Wednesday night, rattling off the word “crazy” a handful of times during an exchange about oil and the environment with Peter Mansbridge on CBC. Our musical “fact check” video covers some of his most outrageous statements, […]

But the prime minister may have reached a new plateau Wednesday night, rattling off the word “crazy” a handful of times during an exchange about oil and the environment with Peter Mansbridge on CBC. Our musical “fact check” video covers some of his most outrageous statements, followed by a five-point breakdown.

For the first time, Harper said he would be willing to accept a price on carbon pollution.

Harper told Mansbridge that Alberta’s carbon pricing system could “go broader,” suggesting new openness to the idea of implementing a carbon levy on a national scale.

This is surprising news given Harper has run an ongoing “smear campaign” against the NDP for the last two years, branding the Opposition’s cap-and-trade policy a “job killing carbon tax” (apparently, anything that puts a price on carbon is a “tax”). Ironically, the Conservatives campaigned for a cap-and-trade plan in the 2008 election. Talk about “flagrant hypocrisy”!

Harper also attempted to clarify his recent statement that regulating the oil and gas industry, as his government has been promising for nine years, is “crazy economic policy.”

“What is crazy,” Harper explained, are economic policies that “shift jobs and development to other parts of North America.”

What is shifting, however, is Harper’s explanation for why he won’t regulate the oil and gas industry. Previously, Harper has said that Canada would only take action to reduce our emissions if America took action first:

Well, now that the United States has pledged to reduce greenhouse gases, Harper’s new line appears to be that he wants a “continental response” — “not just with the United States.” He’d like to see action from “Mexico, as well.”

Looks like no one told Harper that Mexico introduced a carbon tax earlier this year.

3. Harper may now consider ISIS and the 2008 recession to be greater threats to the “future of humanity” than climate change

When Mansbridge asked Harper if he still believes climate change is “the biggest threat to confront the future of humanity today” (a remark Harper made in 2007), we learned Harper may have reevaluated his list of top threats to our species to now include jihadism and a recession that happened six years ago.

“Geez, where does it rank in terms of our economic challenges, in terms of the jihadism that we now face globally?” Harper said. “I mean since then we’ve had the global recession and we’ve had the rise, you know, the kind of second phase rise of the, of the global terrorist movement so I would put those up there as well.”

4. Despite what Environment Canada says, Stephen Harper believes greenhouse gases are in decline

One reason climate change may have dropped on Harper’s threat list is because he says greenhouse gas emissions are in decline — a claim that is at odds with Environment Canada.

“Look, for the first time in history, this country actually has GHG emissions that have been falling,” Harper told Mansbridge.

“Anybody can go around talking about targets,” Harper replied when Mansbridge asked if Canada would meet its emissions targets in line with the 2009 Copenhagen Accord. “What’s the actual results. Ours have been going down.”

The actual results, according to Environment Canada: While Canada’s GHG emissions did drop following the recession, they’ve picked back up and are projected to increase.

Canada’s Commissioner of the Environment and Sustainable Development has said that the regulations the government has put in place under Harper only gets us “seven per cent of the way” to meeting our Copenhagen target.

Harper also mused about the idea of using the revenues from a carbon levy to create a clean technology fund.

On the surface, this sounds like a great idea, but it’s not clear that Harper’s Conservatives are the most credible bunch to administer such a fund.

Meanwhile, the government overspent their budget by nearly 10% on “programs that primarily supported the oil and gas sector through scientific research, market development and government advertising,” including “an ad blitz promoting Canadian oil and Keystone XL in key cities like Washington in the U.S.,” despite the PR campaign having “little impact” according to the government’s own review.