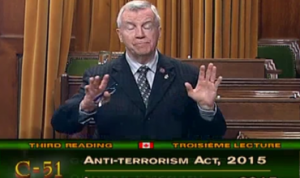 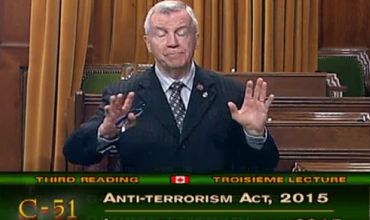 Bill C-51 is really close to becoming law – and its first victim may end up being the Conservative government’s relationship with the business community.  The final vote in the House of Commons took place on Wednesday, with the Liberals voting with the Conservatives. The NDP and Greens voted against it. During the final debate, […]

Bill C-51 is really close to becoming law – and its first victim may end up being the Conservative government’s relationship with the business community.

The final vote in the House of Commons took place on Wednesday, with the Liberals voting with the Conservatives. The NDP and Greens voted against it.

During the final debate, Conservative MP Laurie Hawn questioned whether the “business model” of tech companies that object to the sweeping scope of the anti-terrorism legislation are properly aligned with Canadian values.

Responding to opposition New Democrats citing an open letter to the government signed by 60 business leaders that oppose Bill C-51, Hawn suggested any of those business who are “profiting” off the dispersal of terrorist propaganda “should seriously reconsider their business model and their lack of committment to the values that bind us as Canadians”:

So which company business models is Hawn referring to?

According to the letter from business leaders titled “how C-51 will undermine Canada’s business climate” and signed by executives from Canadian tech companies like Shopify, OpenText, Hootsuite and Slack), the list could include popular social media platforms such as Facebook and Twitter:

“As it stands, C-51 criminalizes language in excessively broad terms that may place the authors of innocent tweets and the operators of online platforms such as Facebook, and Twitter, along with Canada’s Hootsuite and Slack, at risk of criminal sanction for activities carried out on their sites.”

And what about their “values”? The tech leaders say they’re on the side of openness, tolerance and trust of fellow Canadians, as well as a balanced approach to safety:

“The challenge of being Canadian today is to uphold our values of openness, tolerance, and trust of others, while maintaining a very real understanding of the dangers of terrorism and the government’s need to protect us. But sometimes this balance is not struck correctly and we, as business people and entrepreneurs, are convinced that Bill C-51 is not balanced the way we as Canadians would want.

Many have spoken of the impact that Bill C-51 will have on Canadians in their everyday lives, so let us speak to the business impacts. We work with international clients, and we fear that this proposed legislation will undermine international trust in Canada’s technology sector, thereby stifling the kinds of business our respective technology companies can generate when that level of trust is high.

We believe that, despite the rising tide of the knowledge economy, this legislation threatens to undermine Canada’s reputation and change our business climate for the worse.”

And they aren’t the only ones in the tech sector who have issues with C-51.

In March, Mozilla (makers of the popular Firefox web browser) criticized C-51’s “open-ended measures,” including “the overt takedown of websites, attacks on Internet infrastructure, introduction of malware, and more all without any judicial oversight.” Mozilla added that “these kinds of attacks on the integrity and availability of the web make us all less secure.”

And Canada’s Privacy Commissioner Daniel Therrien recently described C-51 as a big data mining operation meant to harvest Canadians’ data to build profiles, and then use algorithms to try to predict who’s likely to commit crimes before they happen — something that would no doubt worry social media companies like Facebook and Twitter that rely on users having confidence that their privacy is secure:

“This is really about big data, which relies on massive amounts of information that can be analyzed algorithmically to spot trends, predict behaviours and make connections.”

So that’s in line with Canadian values?