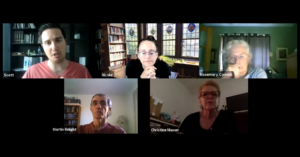 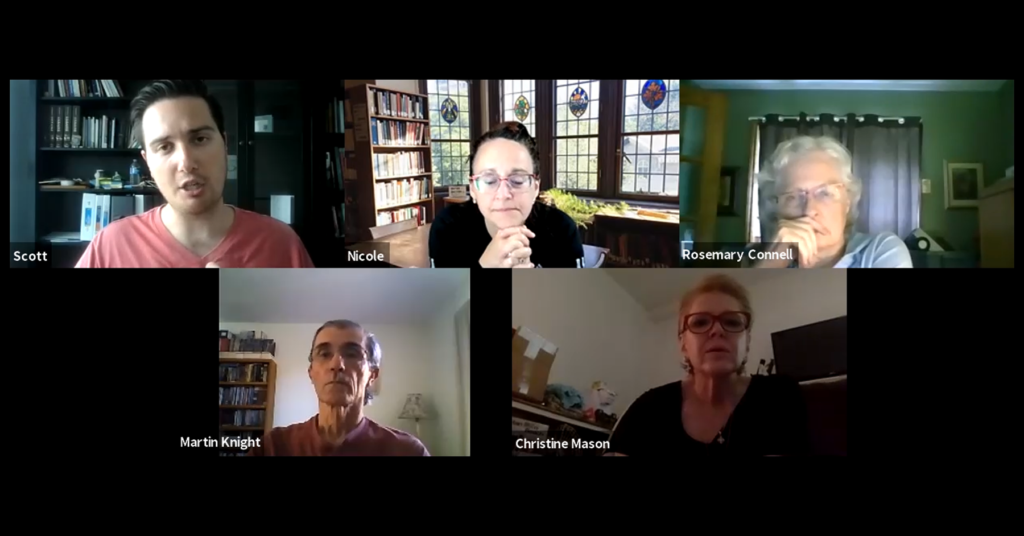 Canadian anti-abortion activists are looking past the upcoming federal election and beginning to prepare for the next Conservative Party leadership race to replace current leader Erin O’Toole, a vote they suspect may happen “sooner rather than later.”

Video from a recent Zoom workshop newly obtained by PressProgress shows organizers from the anti-abortion group RightNow training activists on how to stack Conservative electoral district association votes to install social conservatives on the boards of local EDAs.

The workshop, titled “information session on how pro-lifers can take their rightful place on your local EDA riding board,” shares strategies and tactics aimed at securing “pro-life majorities” on Conservative EDAs across Canada.

“It’s important that pro-lifers are well-represented and properly represented in every aspect of the political process,” Right Now’s Scott Hayward says at the outset of the Zoom workshop. “We want to ensure that our values and our issues and our policies are actually moving forward.”

“This is such a good project to get us ready for having that base in the riding for policy conventions and nominations and leadership races,” Hayward added.

“We need to be prepared for all three of those things happening within the next two years.”

RightNow’s EDA Guide explains “how to easily and effectively get elected to your Electoral District Association in your local riding,” advising anti-abortion activists not to bother engaging existing Conservative Party members but instead “sign up your own supporters as members of the party in the riding to vote for you and your slate.”

“You don’t have to be best friends with them,” Hayward told the workshop.

“Let’s say you’re protestant, you’re like I know this lady at her parish and she’s on her pro-life committee there, she’s on the local Right To Life board, she’s always great, she’s always at LifeChain or something.”

“Make the pitch, and the pitch is: Listen, if you want a major political party that typically contests for government every election to actually be pro-life, we as pro-lifers need to get involved in that party — and eventually, not just that one party, but other parties as well, but again, we’re just focusing on one for the time being.” 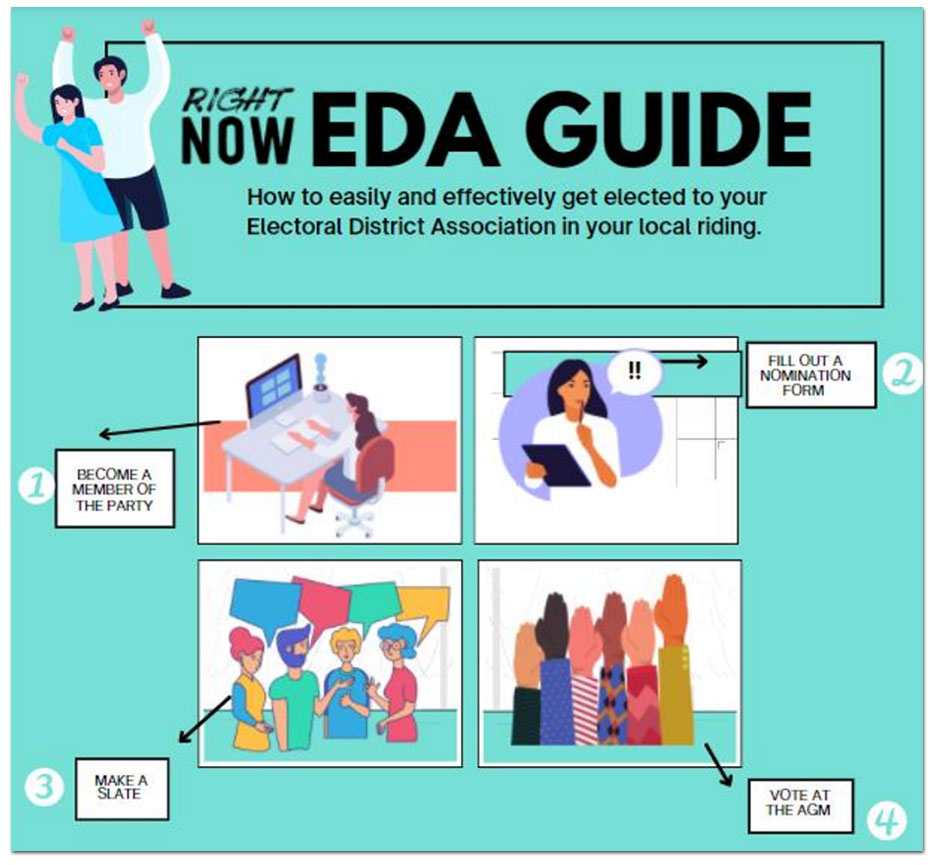 The guide also spells out what anti-abortion activists hope to accomplish.

“The EDA board of directors acts as a conduit between members of the party in the riding and party headquarters,” the anti-abortion guide says, noting “pro-life nomination contestants are approved by the EDA’s candidate nomination committee” and EDAs have influence over the “the promotion of reasonable and popular pro-life policies” in the riding. 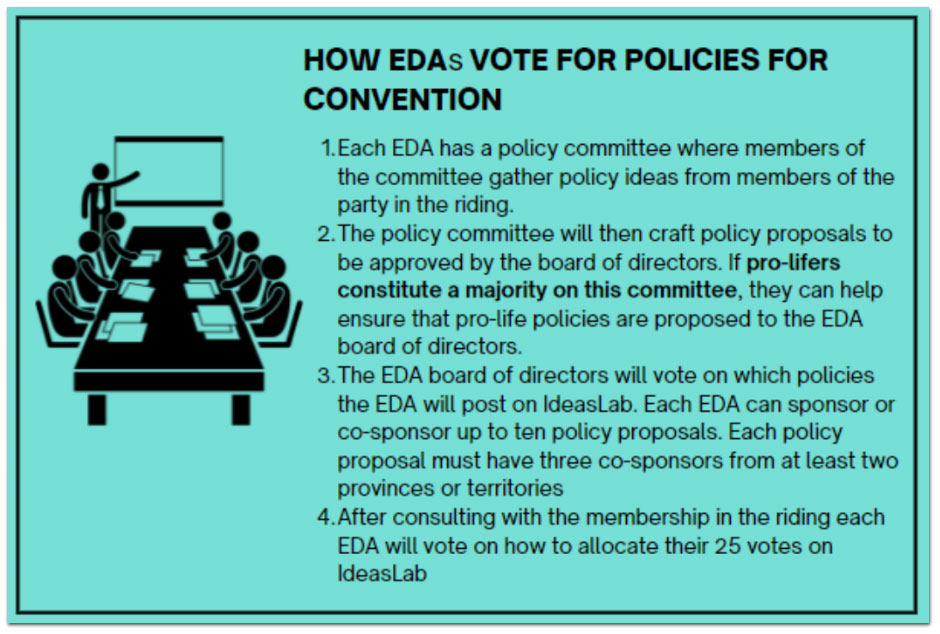 “Each EDA has a policy committee,” the guide explains. “If pro-lifers constitute a majority on this committee, they can help ensure that pro-life policies are proposed to the EDA board of directors” who can in turn vote to “sponsor or co-sponsor up to ten policy proposals” that could make it to the floor of a Conservative policy convention.

“Many of you, if not all of you, were pro-life delegates to the Conservative Party of Canada policy convention in 2021,” Hayward reminded the Zoom workshop. “Once all those policies have enough sponsors and co-sponsors … each EDA president of the 338 riding associations votes for those policies.”

“But here’s the kicker,” the anti-abortion organizer added. “The EDA president must have the majority of votes of the entire EDA board of directors”

“Herein lies the problem with what happened last time which is why we’re doing this project.” 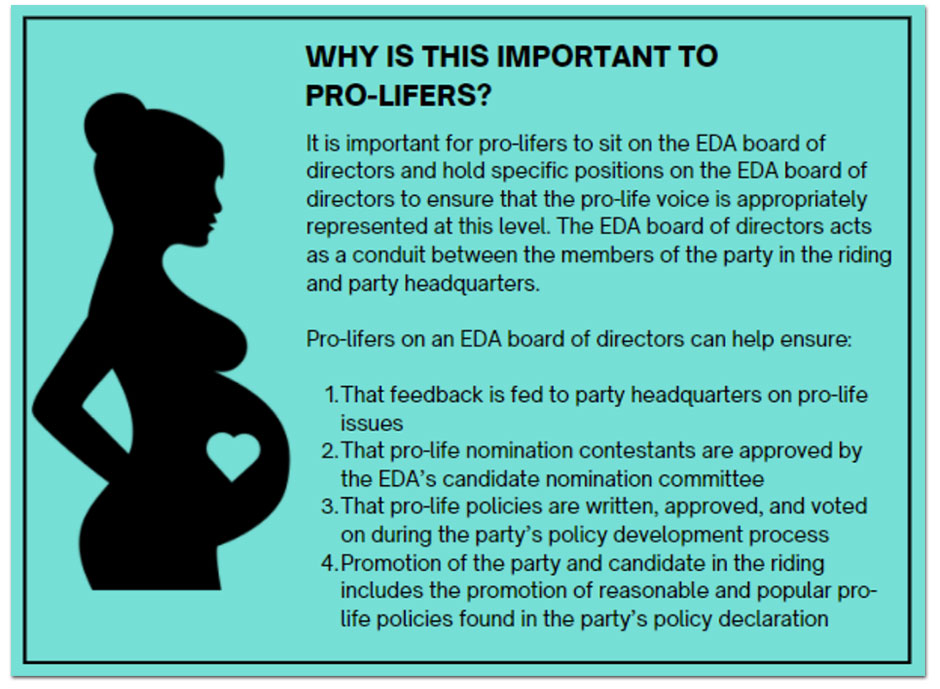 RightNow does not deny it is attempting to stack votes in Conservative EDAs.

Hayward told PressProgress his group has the backing of over 300,000 supporters “across the country” and suggested other parties, including the Liberals, Greens and NDP, “would be wise to to engage that network of members and potential donors.”

Hayward is less open about whether his group is looking past this election towards the next Conservative leadership race, despite encouraging anti-abortion activists to “go past this summer” and begin preparing for a possible leadership race to replace O’Toole in the next year or two.

“If I had that kind of crystal ball, I’d be a much richer man,” Hayward said.