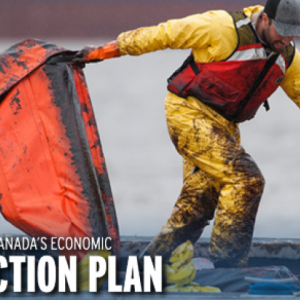 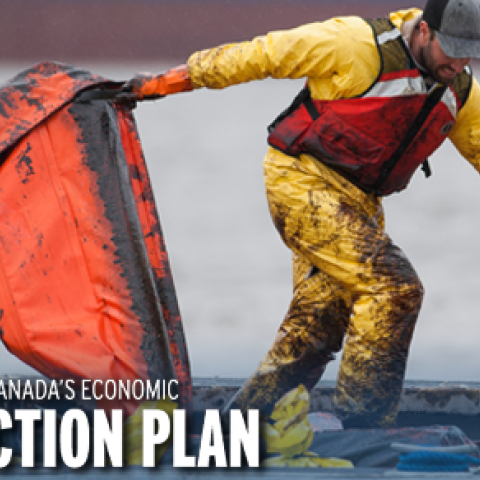 Is Kinder Morgan right? Could oil spills really be “good for the economy”? No, of course not. But ironically, it was Western Canada Marine Response Corporation — a private oil spill clean-up company whose majority owner is Kinder Morgan (minority owners include four major oil companies: Suncor, Chevron, Shell Canada and Imperial Oil) — who got the call for the job of […]

Is Kinder Morgan right? Could oil spills really be “good for the economy”?

No, of course not.

But ironically, it was Western Canada Marine Response Corporation — a private oil spill clean-up company whose majority owner is Kinder Morgan (minority owners include four major oil companies: Suncor, Chevron, Shell Canada and Imperial Oil) — who got the call for the job of cleaning up last week’s oil spill in Vancouver’s English Bay (where the Conservatives shut down a nearby Coast Guard base at Kitsilano in 2013).

According to WCMRC, 35 clean-up personnel were deployed, including six boats with 1,100 metres of boom to contain the spill.

In documents filed with the National Energy Board, Kinder Morgan’s Trans Mountain pipeline company owns a 50.9% stake in this oil spill clean-up company:

Why is that problematic? Well, two things:

First, economist Robyn Allen (whose questions resulting in Kinder Morgan disclosing its stake in WCMRC) points out Canada’s spill response organizations are “predominantly foreign owned and controlled” and run as “for-profit” businesses. This would put a company who stands to “make money” off the same spill they (or a subsidiary) created in an ethically dubious position, says Allen.

Second, Kinder Morgan has actually proclaimed job creation and other economic benefits as a reason why oil spills can be good for the economy.

Kinder Morgan’s President Ian Anderson would later claim the passage was taken “out of context,” adding that the National Energy Board requires them to detail both the positive and the negative effects of oil spills in pipeline applications.

However, the NEB as well as rival pipeline builders Enbridge and TransCanada said there is  nothing in the regulatory handbook compelling Kinder Morgan to rattle off the possible good things that come from an oil spill. As an NEB spokesperson told the Vancouver Sun last year:

“It does not say that we expect to see an assessment of the positive benefits of a potential spill. In this case, (Kinder Morgan) has chosen to indicate that there will be economic benefits as the result of a spill or malfunction.”

But all of this brings us to a more serious issue — Kinder Morgan is currently refusing to make public how they plan to deal with an oil spill — something that’s especially relevant given the response to last week’s spill in Vancouver.

This despite the fact they’ve made their plans public in other jurisdictions, including neighbouring Washington State. As Victoria NDP MP Murray Rankin recently told the House of Commons:

“Kinder Morgan is allowed to keep its plans for oil-spill recovery secret from the people of Victoria and from all British Columbians — the very kind of plans that are routinely available across the border, in Washington state. This deplorable secrecy does no favour to the resource industry which depends upon social licence from first nations and from communities small and large trampled by a government that allows our resources to be sold at any price.”

In July 2014, the British Columbia government filed a motion with the NEB, complaining that Kinder Morgan did “not provide sufficient information” to 78 questions relating to oil spill response.

In a 41 page response, the BC government noted Kinder Morgan did not supply information concerning WCMRC’s capacity to respond to oil spills.