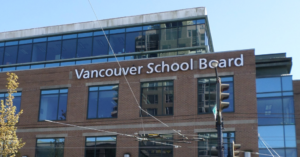 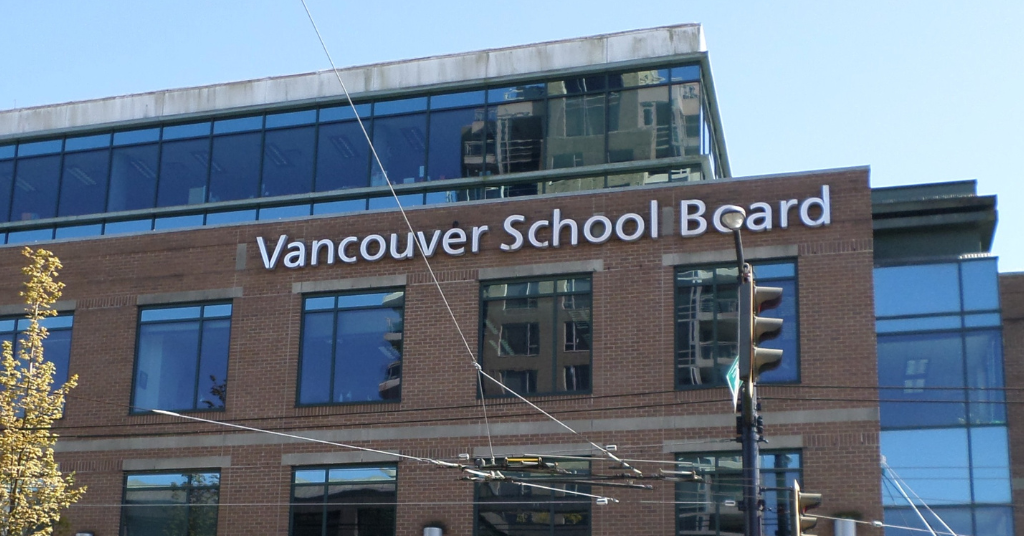 Vancouver School Board to vote on reinstating cops in schools tonight

The Vancouver Police Department tried to gift toy guns to a group of elementary students with complex needs, a Vancouver teacher shared at a public Vancouver School District delegation meeting last week. The teacher shared this anecdote to argue against reinstating VPD officers in schools.

The Vancouver School Board is set to vote on the reintroduction of the School Liaison Officer Program tonight. Strathcona Elementary teacher Luey McQuaid was one of many delegates who participated in the school district’s public forum on November 21 last week.

McQuaid said the incident with the VPD took place during the 2019/2020 school year at McQuaid’s former workplace, the Alderwood Family Development Centre – a program for students with complex needs and trauma, many of whom have previously had negative experiences with police.

During Christmas time, the VPD wanted to bring presents over to the students at Alderwood,” McQuaid said during the delegation. “I said, due to the impacts and trauma experienced by my students, I would only like to invite the VPD in without their uniforms and also not stating that they’re police officers.”

The VPD then declined to attend the school out of uniform, McQuaid continued, but sent the gifts to Alderwood anyways. McQuaid said they opened the presents prior to giving them to students and found the VPD had gifted students toy guns.

“We did not give these presents to the children knowing that we do not support guns at Alderwood in the program,” McQuaid said.

The VPD did not provide PressProgress with a comment on the incident, despite multiple requests. The Alderwood school also declined to comment telling PressProgress the school’s policy prohibits administrators from speaking directly to the media.

While the choice of gifts in itself was questionable, McQuaid added that the issue of police in schools is much larger than that one incident.

“If you’re at school, that’s a safe space where you can be away from the police,” McQuaid told PressProgress.

“And I think it just sends a message that cops are everywhere and you can’t get away from them, no matter how hard you try. And (that) the education system supports this system that doesn’t actually protect everybody.”

The VSB voted to cancel the SLO program in 2021 following consultations with students, teachers and community members who expressed concern about the adverse impact of having uniformed police officers in schools.

However, ABC Party school trustee Preeti Faridkot has proposed reinstating a “revised” SLO program, following through on one of the ABC Party’s platform promisesduring the 2022 municipal election.

For McQuaig, reintroducing cops in schools undermines the wishes of the community who fought to remove the SLO program in the first place.

“There were a lot of students who participated in the end of the SLO program, as well as adults, it was a community effort,” McQuaid said.

“The youth have already stated that they don’t want the SLO program, but (the VPD) is saying, ‘We like cops, so we believe in this, and this is how we got into a position of power, so we’re going to use our power to get what we think is appropriate, rather than listening to the community at large.'”

On Friday, the BC Human Rights Commissioner Kasari Govender wrote a letter recommending “that all school districts end the use of SLOs until the impact of these programs can be established empirically.”

B.C.’s Human Rights Commissioner @KasariGovender has issued a letter to the BC School Trustees Association recommending that the use of School Liaison Officers (SLOs) in British Columbian schools be ended by all school districts. Read the full letter at https://t.co/YhqDIbyPbC pic.twitter.com/ZJlcqdH2mo

“While there is a lack of research in Canada about the impact of SLO programs on Indigenous, Black and other racialized students, American research has found that SLOs contribute to a sense of criminalization and surveillance in schools, especially disadvantaging marginalized students,” the letter reads.

“To school boards who choose not to take this recommendation, Govender stated, “it is incumbent on you to produce independent evidence of a need for SLOs that cannot be met through civilian alternatives and to explain the actions you are taking to address the concerns raised by Indigenous, Black and other marginalized communities.”

Andrea Vásquez Jiménez , director and Principal Consultant at Policing Free Schools adds that reinstating cops in schools, even in a “reimagined” program, is not evidence-based.

“​​At City Halls across so-called Canada, including right there in Vancouver as well, there’s been this push for, and very much non-evidence based—of increasing police budgets, rather than actually supporting and divesting from policing, divesting from carcerality to actually invest in what is evidence based, and that is addressing social determinants of health and equity,” Vásquez Jiménez told PressProgress.

“We have concrete examples that trustees at the Vancouver school board are interested in ignoring students’ human rights. The reality is that equitable access to education is a human right, and policing and carcerality impedes this access.”

📣@PolicingFreeSch convening National Campaign #PolicingFreeSchoolsCA📣
Haven’t connected yet with us or the National Network? Are you part of an existing Police(ing)-Free Schools Campaign or in the process of developing a new one? JOIN US! https://t.co/YRneNrKRDL #CdnPoli #CdnEd pic.twitter.com/AzbXYoFOMR

Some BIPOC students reported feelings of fear and discomfort with the presence of police in schools, which was in part one of the reasons why the program was ultimately cancelled, a Vancouver School District engagement report released in 2021 explains.

Vásquez Jiménez adds that regardless of the reforms made to the program—either in the forms of training, diversity, technology—the harms of the program can never be dismantled while police are still present in schools.

“It must be the full removal of all and any police-in-school programs and policing-in-school programs, and moving towards uprooting policing and carcerality in all its forms, and actually co-creating transformative, healthy, equitable, anti-racist, anti-oppressive, liberatory, life affirming and healing educational spaces, and those types of spaces that provide excellent learning conditions for all students is not possible with the presence of police,” Vásquez Jiménez added.

The school board is set to debate and vote on the motion tonight, November 28 at 7 PM.