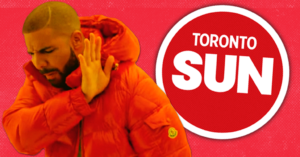 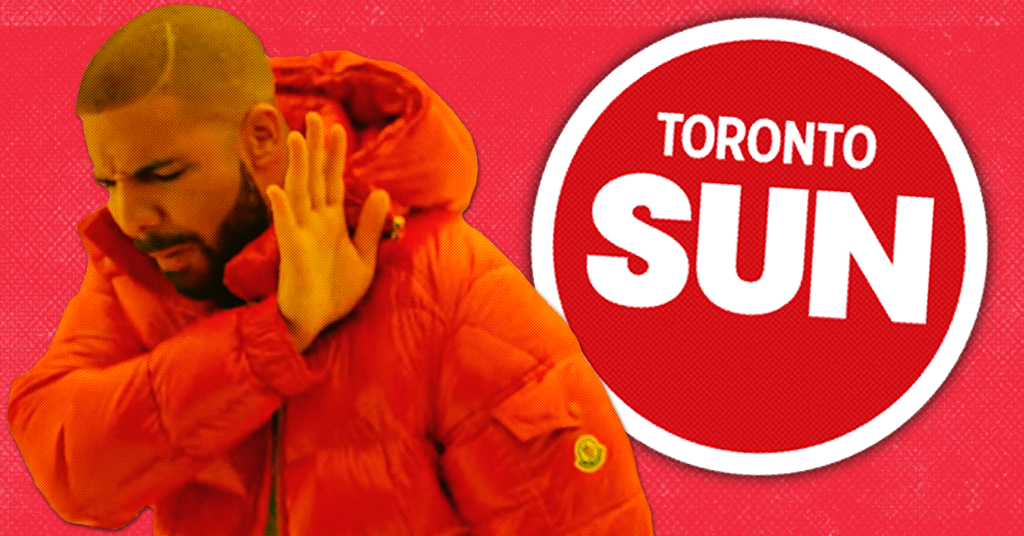 Toronto Sun columnist Joe Warmington is at it, again.

This time Warmington has had a column yanked after using colourful language to shine a bright white light on the topic of “gang culture.”

Among other problems, Warmington’s column asked why Don Cherry was pulled off the air after being “branded a racist” when Drake sings songs promoting murder.

Except the lyrics Warmington offered as proof are not Drake’s lyrics — in fact, there does not appear to be any song in existence that uses the specific lyrics cited in Warmington’s column.

According to an editor’s note that now appears on the Toronto Sun website:

A column by Joe Warmington published on the Toronto Sun website on May 27, 2020, with the headline ‘WARMINGTON: We seem to applaud gang culture’ is no longer available. The column incorrectly quoted the lyrics to a Drake song that mentioned ‘Chubbs.’ The Toronto Sun apologizes for the error 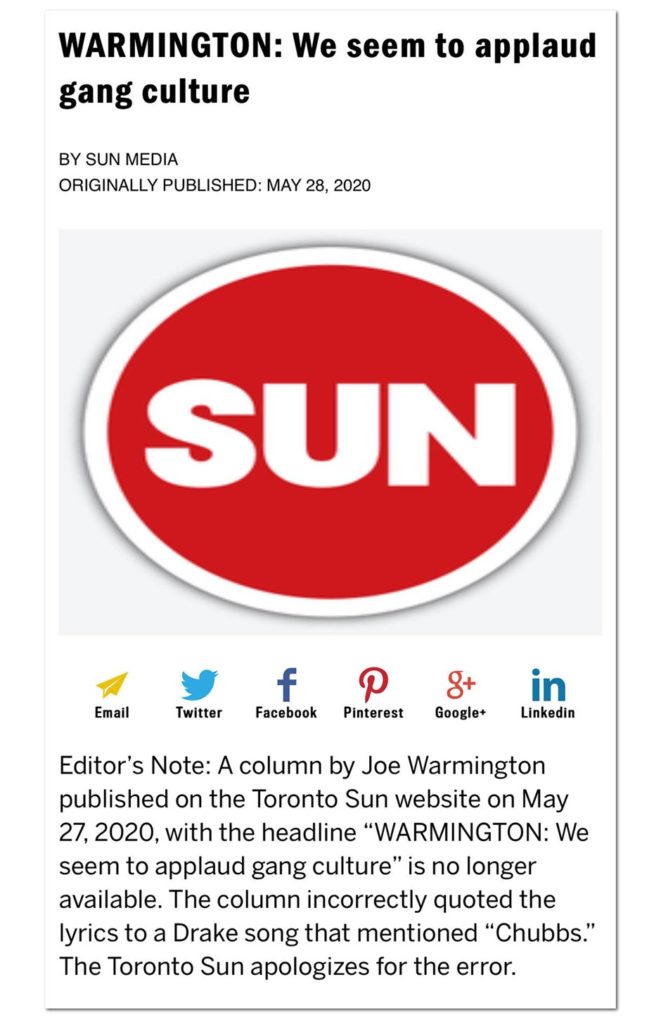 In the original May 28 column titled “We Seem To Applaud Gang Culture,” the right-wing columnist criticized Drake for receiving “the key to the city” despite writing Hip-Hop lyrics that state: “If I’m scared (bodyguard) Chubbs will shoot you by himself. Only need one person to shoot you.”

The original version of the column stated:

Get within in two metres, the city calls you ‘selfish’ and ‘dangerous.’

Write Hip-Hop lyrics like Drake and he gets the key to the city: ‘We can’t afford to let someone else get killed. If they scared, we kill you by ourselves. If I’m scared (bodyguard) Chubbs will shoot you by himself. Only need one person to shoot you, you only live once.’

Say the following on TV — like former Coach’s Corner host Don Cherry — and you lose your job and are branded a racist: ‘You people, you love our way of life, you love our milk and honey, at least you can pay a couple bucks for a poppy.’

Joe Warmington one of Toronto Sun’s top journalists made up fake Drake lyrics in an article about the death of Houdini. pic.twitter.com/G9jF2Qix9o

It is not clear where Warmington found those lyrics — the only Google search results matching those words are links to Warmington’s column itself.

Warmington did not respond to requests for comment from PressProgress asking where the lyrics he attributed to Drake originally came from.

However, soon after publication, Warmington issued a tweet acknowledging he had made an “honest mistake mixing up notes” and offered his “full apologies to readers and to Drake.” 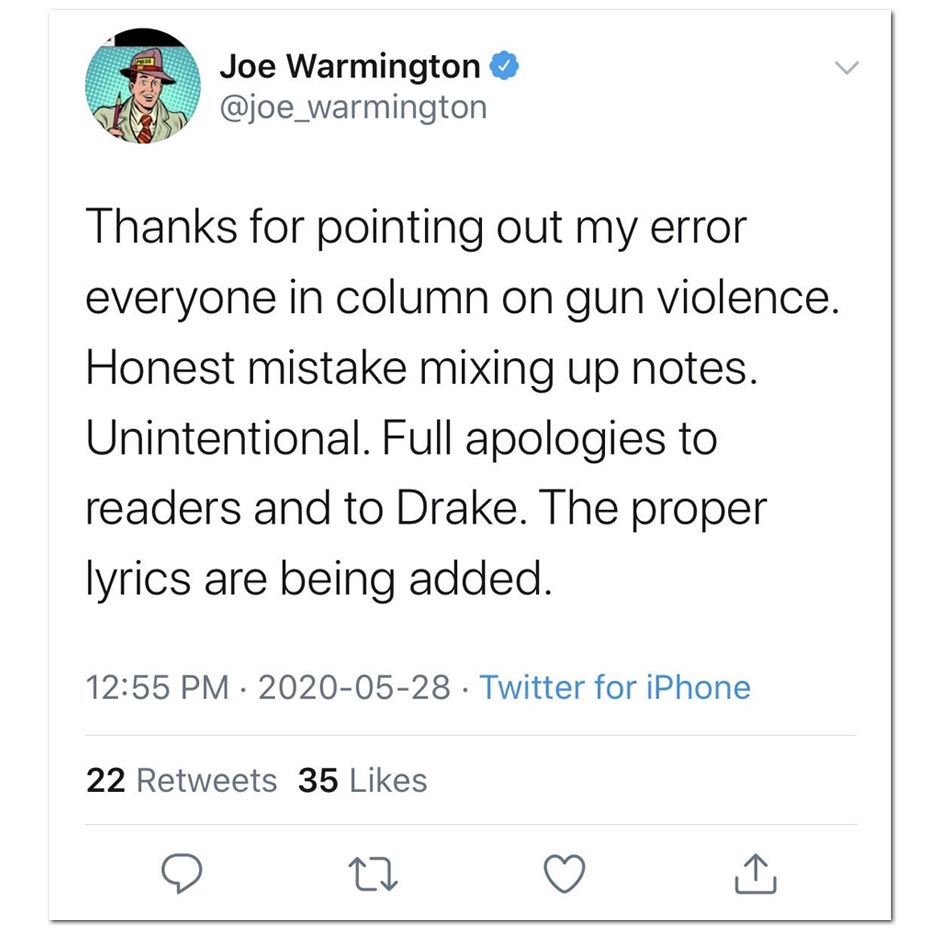 At some point after it was first published, the Toronto Sun removed the fake Drake lyrics and quoted Drake lyrics referencing “hoes” and “my n—– across the street”:

“But if you rap “got hoes that I’m keeping in the dark. I got my n—– across the street living large. Thinking back to the fact that they dead” and you’re ambassador for the NBA champion Toronto Raptors.

According to an internal staff memo obtained by Canadaland’s Jonathan Goldsbie, Toronto Sun Editor-in-Chief Adrienne Batra acknowledged “there has been a lot of negativity thrown towards the Sun for our reporting on specific issues” and conceded “one of that criticism is merited as a mistake was made.”

Batra added that “it can be somewhat disheartening to see all the negativity but please never let it take away from the incredible work you do day in and day out for our readers.”

Batra did not respond to requests for comment from PressProgress.

Update: This story has been updated to include a screenshot of a tweet sent by Joe Warmington after Warmington deleted his original tweet following publication of this story.