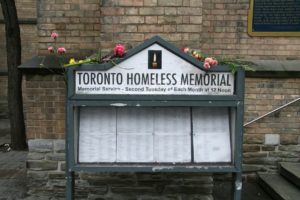 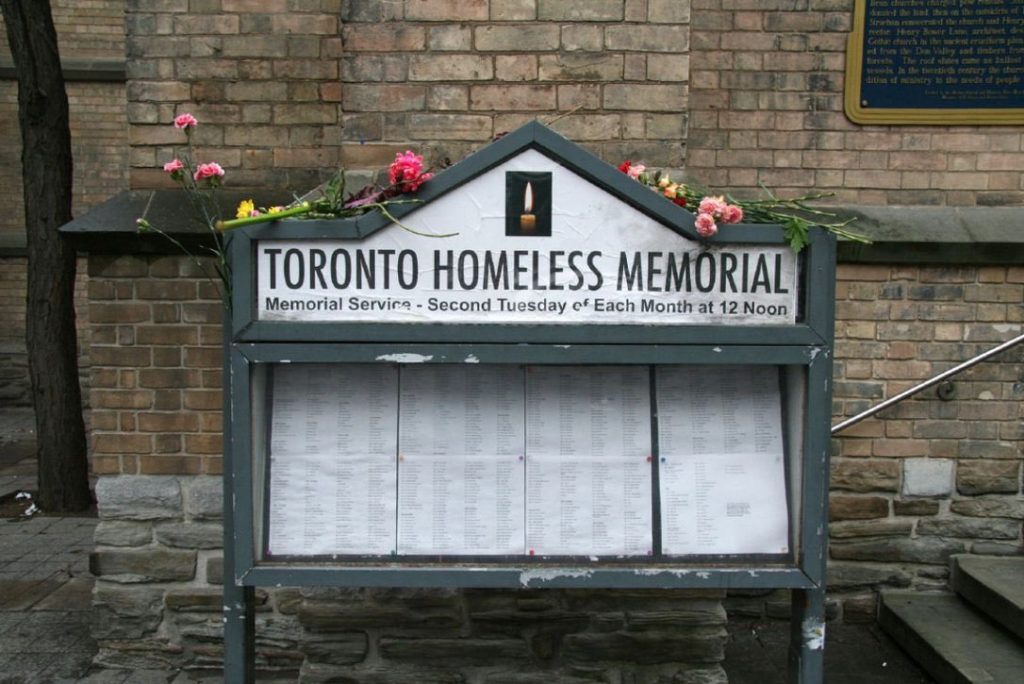 As PressProgress reported previously, Toronto’s homeless shelters have experienced chronic underfunding and overcrowding for years. The city reported an average of about two shelter resident deaths every week from 2017-2019.

Toronto’s Homeless Memorial has a new look, thanks to a couple hundred marbles. (I didn’t count) Another new feature. Those wanting to look for names of loved ones can now move the pages – as the list of the dead has long outgrown the space. pic.twitter.com/EeNVHrcvUa

But since January 2020, when Toronto’s Homeless Memorial added its 1000th name, the shelter death count seemingly hasn’t been updated. The webpage only reports seven deaths in 2020, all in January and with an average age of 53.

While the city keeps a separate list of current COVID-19 outbreaks in its shelters, advocates said it leaves out a number of other likely causes of death.

Street nurse Cathy Crowe told PressProgress “I think it’s pretty substantial especially in a pandemic where homeless people are uprooted, whether be to encampments, hotels or temporary housing, and the opiate and mental health crises exacerbated by the pandemic. “

“This non-reporting is another example of neglect to this population,” Crowe said.

“In further consultation with our data team, they have advised that due to the City’s ongoing response to our local COVID-19 situation, some recent data updates have not been made to some of our routine reports. We are continuing to work with our City partners and partner agencies on this initiative and hope to resume this reporting in the near future.”

St. Michael’s Hospital Homeless, Housing and Health chair Dr. Stephen Hwang told PressProgress “it’s understandable that the process has been on hold given the incredible changes that have taken place in the shelter system during COVID, it would be ideal to reestablish a regular mortality reporting system.”

Toronto Alliance to End Homelessness executive director Kira Heineck told PressProgress the delayed reporting “seems pretty consistent with the other data that we usually get from Shelter Support and Housing Administration (SSHA). That all paused when COVID hit.”

That could be cause for concern, Heineck said, if there were an unreported increase in deaths among shelter residents for non-COVID reasons.

“We know from statistics how bad it is for your health and mortality to be homeless. The longer it goes on, the more we may be at a disadvantage for not having that data,” Heineck said.

Citizens For Public Justice socio-economic policy analyst Natalie Appleyard told PressProgress “Reporting publicly on the health outcomes and mortality rates of people experiencing poverty and homelessness is critical in understanding the impacts of our policy and spending decisions, particularly in the midst of a public health crisis.”

“This information can both help us stop the spread of this novel virus and address the pre-existing crises of homelessness, poverty, and inequity in our country. The same groups of people and communities facing systemic inequity face the greatest risks to their health and livelihoods,” Appleyard said.