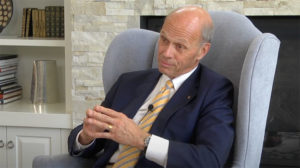 The Head of Jason Kenney’s Anti-Alberta Inquiry Filed a Complaint Accusing CBC Of Being ‘Unfair’. His Complaint Has Been Dismissed.

Steve Allan, head of the Alberta government’s inquiry into anti-Alberta energy campaigns, accused CBC News of not treating him “fairly” in a recently dismissed complaint to the public broadcaster’s Ombudsman.

That coverage prompted a complaint by commissioner Steve Allan.

According to Allan, Alberta’s Inquiry into Anti-Energy Campaigns “took no position” when it published the two reports — despite paying for them and publishing them online.

Allan believes the CBC News report was unfair because it didn’t state that his inquiry wasn’t endorsing the reports’ content.

Anti-Alberta energy campaign inquiry commissioner Steve Allan filed a complaint to CBC’s ombudsman about our coverage of the reports he commissioned. #ableg #cdnpolihttps://t.co/1Dtuw4GiSm

“I take no issue with the Journalists publishing or discussing critics of myself or the Inquiry in general or the Reports specifically.” Allan stated in his complaint.

“However, I do take issue with the Journalists either failing to note or choosing to ignore the key fact that the Inquiry published the Reports on the Inquiry’s website with a clear disclaimer that the Inquiry took no position on same.”

“‘The Article and Interview were both represented as investigative journalism. The Journalists are obligated to treat me with ‘openness and respect’ and to act ‘even-handedly’,” Allan continued. “They are further obligated to ‘diligently attempt to present the point of view of the person or institution being investigated’. The Journalists failed to satisfy these obligations.”

“The Journalists have also failed to treat me fairly,” Allan added.

The CBC Ombudsman’s report, however, found that Allan and his Inquiry were given an opportunity to clarify before the article was published — but they declined.

Stephanie Coombs, Director of Journalism and Programming for CBC Edmonton, explained in management’s response to the complaint.

“On the morning of the 14th, Mr. Rusnell had asked your communications director, Alan Boras, for an interview to respond to critics unhappy that you had commissioned the reports. That interview request was declined, and Mr. Boras did not provide any written statement or additional information for CBC to consider … I feel it relevant to point out there has been intense public interest over the past several months in the inquiry, its work and its timelines, of which you are undoubtedly aware. And by the time Mr. Rusnell contacted Mr. Boras on Jan. 14 to ask for an interview, there was already a robust discussion growing about the reports.”

One of the reports, authored by Barry Cooper, suggested the ” so-called consensus view regarding anthropogenic climate change” is facing a “growing scientific skepticism.”

For this report, Cooper was paid $6,125, according to Inquiry Spokesperson Boras.

The other report was authored by a home school teacher in England named Tammy Nemeth for $28,000.

“There are various ideas circulating for what will replace the current system,’ wrote Nemeth.

“And although there are differences amongst the various interested groups, they agree on the ultimate goal of ending capitalism and our modern way of life.”

“This has been called “The Great Transition”, “Paradigm Shift”, “Great Transformation”, “Global Phase Shift”, and many other labels,” Nemeth wrote.

In his decision, CBC Ombudsman Jack Nagler agreed with Allan that journalists have an “obligation to try to understand the Inquiry’s position on whatever issue is at hand” but added that does not mean journalists needs to republish random information posted on the Inquiry’s website.

“You are correct that the inquiry had no obligation to provide an interview or a statement,” Nagler wrote, but added: “That does not equate to an obligation that CBC regurgitate whatever you put on your website.”

The Ombudsman acknowledged a disclaimer does appear on the Inquiry’s website indicating Nemeth and Cooper’s conspiratorial reports “do not represent findings or positions taken by the Inquiry,” however, he added that misses the point.

“The key question that CBC was asking,” Nagler explained: “Why were (the reports) considered legitimate enough to be commissioned in the first place?”

“There was no violation of journalistic standards,” the Ombudsman concluded.

“While I disagree with Ombudsman Nagler’s finding of no violation of journalistic standards, I was encouraged that Mr. Nagler said ‘Yes’, he would have ‘preferred that CBC include the disclaimer’.”