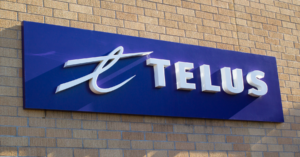 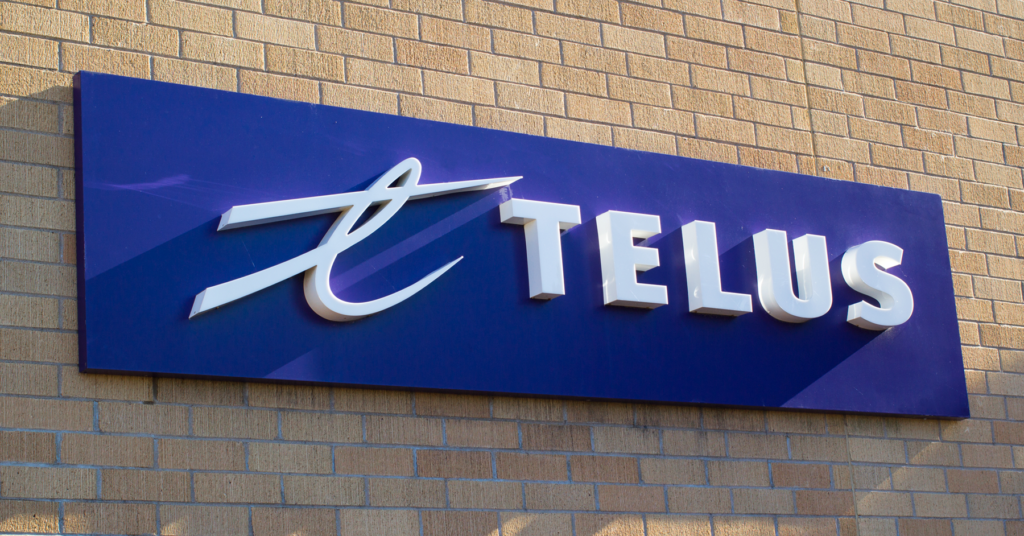 Last month, telephone bookings for BC’s vaccine rollout got off to a rocky start amid technical difficulties and jammed phone lines. BC’s Ministry of Health later explained it had contracted telecom giant Telus to run its vaccine booking call centres and that the company initially failed to ensure adequate staffing levels.

CBV Collections, a Burnaby-based debt collection firm, later told PressProgress it had been in talks with Telus about subcontracting call centre work for vaccine bookings, but declined to confirm they had been involved in its messy launch. 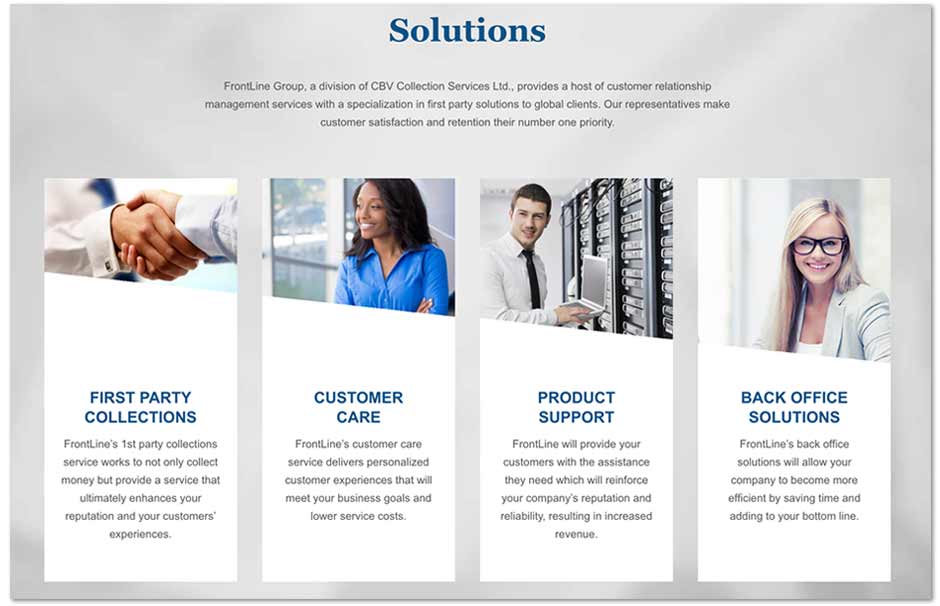 However, emails and employment documents newly obtained by PressProgress show that soon after the launch, a recruitment agency was hiring workers for a “COVID-19 Vaccination Call Center, ran by Telus Health and CBV Collections.”

“I honestly can’t comment on that,” CBV President Bob Richards recently told PressProgress after being told about the newly obtained documents.

Two former workers told PressProgress they were hired to work for CBV to staff vaccine call centres and raised concerns about the training process.

One described the training process for booking vaccine appointments as “very chaotic.”

“It’s such a mess. I don’t even know how this is allowed. It’s so disorganized,” the former worker told PressProgress. “The whole thing is just kind of a mess.”

The former worker asked to remain anonymous as they are currently looking for another job. Emails and a remote work agreement show they underwent training to take bookings for vaccine appointments with CBV in the past two weeks.

The former worker said they were hired on a $19 per hour, six-month contract to take vaccine appointments in the Fraser Health region. Documents show CBV enlisted the recruitment agency Aerotek to handle part of its employee onboarding process — indicating yet another layer of outsourcing in the delivery chain of public health infrastructure.

Aerotek declined requests for comment from PressProgress about its dealings with CBV.

The former worker alleges they were ultimately fired because CBV was disorganized when they went to pick-up equipment from their office.

According to the former worker, they were locked outside CBV’s office for 15 minutes after paying for parking because they had only been supplied with an address and given no phone number to reach the call centre’s supervisors. They had an exchange with their supervisor when they were eventually let inside which, the worker said, ended amicably with apologies on both sides.

However, after undergoing a full eight-hour day of paid training the next day, the worker said Aerotek told them that their employment with CBV had been suddenly terminated because of their interaction with the supervisor. 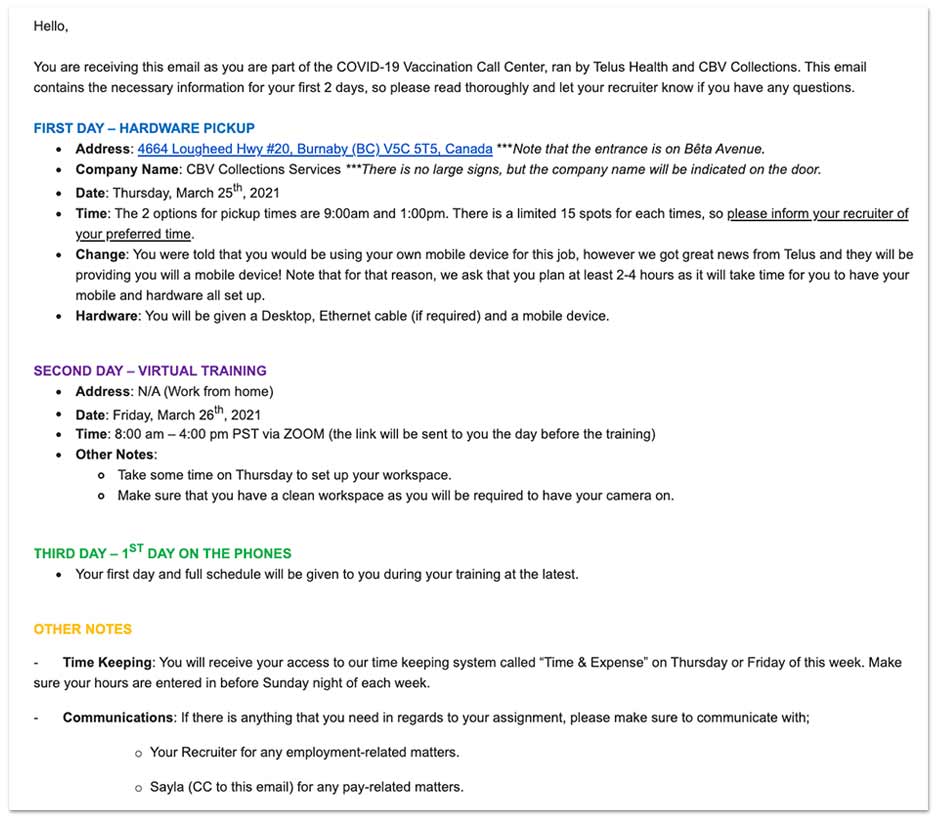 “I was very upset that I lost this job, and I was very disappointed that this was the reason why I lost it,” the former worker explained. “It was very, very frustrating for me.”

CBV did not respond to questions about the worker’s allegations.

The training session itself, the former worker explained, was conducted directly by Telus Health over video chat, with one supervisor tasked with training around 40 new employees.

The former worker said the vaccine booking process is much more complex than they had expected. A significant number of new, inexperienced employees participating in the training session appeared visibly confused and overwhelmed, the former worker said.

“I saw people commenting who were like oh, wow, this is a lot,” the former worker explained. “It’s a lot of people who just got this position and now they’re just training them in this way, so there’s definitely not a lot of support.”

At one point, the former worker added, “I would see in the chats people were saying like oh the system has been down for an hour, I can’t do anything.”

Last month, another former CBV worker told PressProgress the training process was “extremely disorganized” and that they were left waiting for three hours for technical assistance.

Telus did not respond to specific requests for comment about its involvement with training vaccine call centre workers.

Although the BC government initially contracted Telus to manage vaccine bookings, the telecom giant has for over a decade outsourced some of its call centre capacity to non-unionized third parties, including CBV. 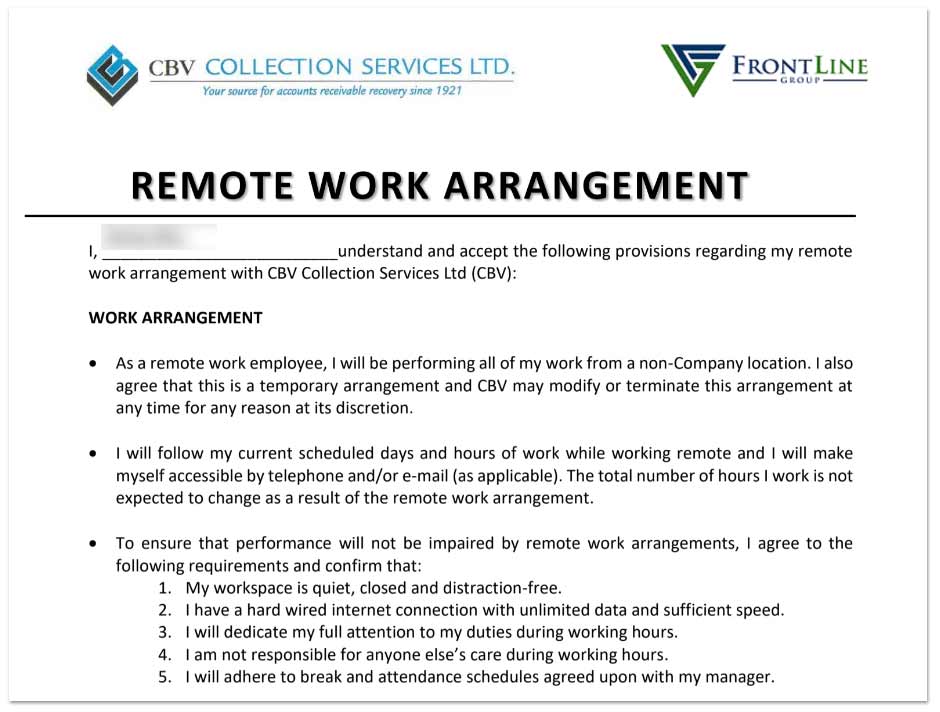 Donna Hokiro, acting president of United Steelworkers 1944, which represents Telus call centre workers, told PressProgress: “The business used to be a lot more simplified. You had customer service or what we would call care, and you had your accounts management team or what you would call collections. They were all unionized employees.”

Hokiro is concerned about the fact that Telus is outsourcing vaccine bookings to third-party companies before using Telus’ own part-time unionized employees who are willing and able to do that work.

“We do have people that are part time,” Hokiro explained. “I know some that have had their hours reduced recently because I’ve received calls or messages, that they would love to be able to be utilized and if not for the clinics, utilize someone else for the clinics and give them a fuller schedule.”

“I have tried to bring that to the attention of Telus, to no avail.”

According to Hokiro, it is unlikely Telus is saving a significant amount of money subcontracting to third parties, and suspects the telecom giant’s actions likely have more to do with weakening the union bargaining unit.

“It’s not about money always,” Hokiro said “It’s about power and control.”

“You know they want to obviously just by how they’ve continued to want to weaken the bargaining unit by either language or membership. It’s a North American phenomenon. It’s nothing new or surprising, though it is shameful.”

In a statement to PressProgress, a Telus spokesperson said the company is fulfilling its public contract to provide call centre support for BC’s vaccine program by relying on “the support of all of our team members, both unionized and non-unionized, vendors, and other stakeholders to ensure British Columbians can get vaccinated as soon as possible.”

The company added that its use of subcontractors is in response to “the temporary, intense spike in demand to meet our commitment to British Columbians for the vaccine program while also maintaining service levels for Telus customers.”

“Our priority is to respond by ensuring our team members are trained, have robust support, and have full access to the systems to swiftly book vaccination appointments with care.”

Despite stumbling out of the gate, the company said it is now “one week ahead of schedule for vaccine bookings.”