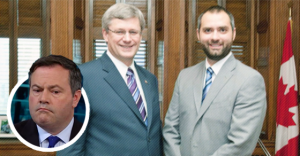 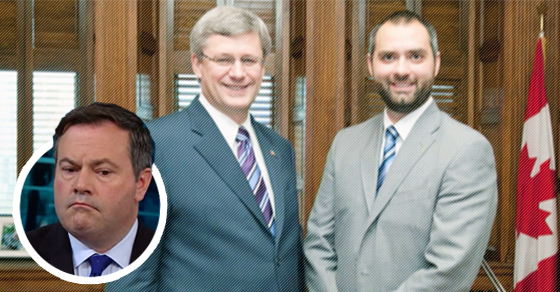 As Jason Kenney’s taxpayer-funded ‘Summer of Jason’ continues through the lazy days of August, how are Kenney’s efforts to unite-the-right going?

For one thing, the prospective Alberta PC leadership hopeful’s Twitter mentions seem to be getting flooded with questions about why he’s still collecting his MP’s salary and why his campaign is raising money before rules governing the party’s official election campaign kick in?

For another thing, one of the people tagging Kenney with these questions is none other than a former special adviser and legal counsel in Stephen Harper’s Prime Minister’s Office.

Benjamin Perrin, an “accomplished lawyer and a life-long Conservative” best known for his role as a supporting cast member in the Mike Duffy soap opera, posed a number of pointed questions at Kenney over the weekend on Twitter.

How is it Kenney can justify reported fundraising through third party entity while collecting MP salary? #cdnpoli https://t.co/VsOtZh4D0q

And also other questions, such as:

“Money will not be transferred from @UniteAlberta to Kenney’s official leadership campaign”-it goes where? #cdnpoli https://t.co/Ww5haiH8j7

At issue is Kenney’s decision to continue collecting his $170,400 per year MPs salary while simultaneously raising tens of thousands of dollars in support of his own leadership campaign, months before the official race – along with rules surrounding campaign fundraising – has even gotten underway.

The Canadian Taxpayers Federation, a group Kenney himself once led, recently suggested Kenney “shouldn’t be getting paid” by taxpayers if his time is being spent campaigning for PC leader rather than his MP duties.

Between July 6, when Kenney announced his intent to seek the PC leadership, until the official start of the PC leadership race on October 1, Kenney will have pocketed close to $40,000 from taxpayers – earning more in three months than most Canadians earn all year.

At the same time, Kenney has raised tens of thousands of dollars for Unite Alberta, described as “the de facto leadership campaign for Jason Kenney until the official PC leadership campaign starts,” accepting donations of up to $30,000 per individual.

Although Elections Alberta says Kenney is acting within the letter of the law, observers say his unconventional approach is spooking Kenney’s PC rivals who are “worried about one candidate who is already running getting a leapfrog in front of everybody else who is waiting for the Oct. 1 deadline.”

But all of this just seems to beg one question after the next for Harper’s former legal counsel:

Will Kenney accept donations twice for leadership race from donors: once through @UniteAlberta and again as official candidate? #cdnpoli

That question actually led to this cordial exchange between Perrin and a twitter account connected to Kenney’s “de facto” campaign (which is also opening a brand new “de facto” office in Calgary on Monday, presumably to serve as headquarters for an army of campaign workers operating Kenney’s innumerable Twitter accounts):

@KenneyFactCheck you’re much nicer than @jkenney who blocked me (and many others) after tweets he didn’t seem to like. Lesson learned?

In July, Perrin suggested Kenney blocked him on Twitter because he pointed out Kenney is more right-wing than Stephen Harper:

I guess Jason Kenney didn’t like my pointing out recently he is right of Stephen Harper. #truthhurts #cdnpoli pic.twitter.com/XbtX4oOmgr

Sounds like Kenney’s efforts to “unite” conservatives are going smoothly.