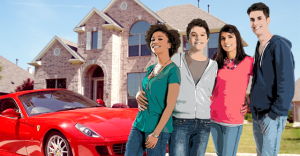 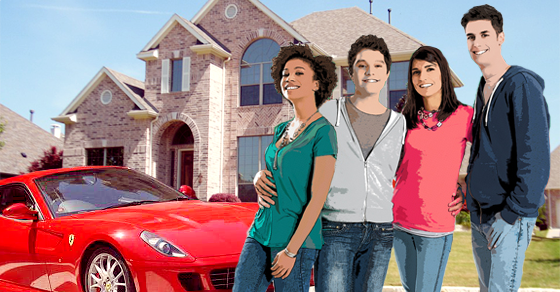 Here's a tone-deaf argument for not giving Canada's lowest-paid workers a raise.

Here’s a tone-deaf argument for not giving Canada’s lowest-paid workers a raise.

According to a new report from the Fraser Institute, a right-wing think tank full of experts who doubt climate change science and want to drive down wages for first responders who “go running into burning buildings,” Canadians should reject proposals to raise the minimum wage because it will help teenagers from “affluent families.”

“Minimum wage earners in Canada” are “not who you think,” the Fraser Institute warns.

Minimum wage workers are mostly “teenagers or young adults aged 15-24” who live “with their parents or other relatives” the Fraser Institute says, a point they decided to visualize with this cartoon of a teenager lounging in front of a TV in their parent’s basement: “There are many minimum-wage earners (such as teenagers) who come from affluent families,” the report states, “meaning middle- and upper-income people would receive some of the benefits” from “raising the minimum wage.”

And what evidence does the Fraser Institute supply to support this cartoonish image?

For another thing, some minimum wage workers counted as living with their families are actually middle-aged, others are married. And the Fraser Institute doesn’t seem to consider the possibility people could find themselves in these living arrangements because their wages are so low.

Statistics Canada’s 2015 Labour Force Survey shows less than one-third (32%) of all minimum wage workers in Canada are between 15-19 and live with their parents – not quite the “vast majority” the Fraser Institute suggests.

The report doesn’t have much to say about hundreds of thousands of minimum wage workers (41%) who are 25 and older and don’t exactly line-up with the cartoonish pictures drawn by the Fraser Institute: And that picture looks different when you consider other workers in low-wage jobs who would benefit from minimum wage increases.

Among workers who only earn up to a dollar or so above the minimum wage, less than one-third are teenagers and close to half are 25 and older: That gap grows when you look at workers earning less than $15.

In other words, if the minimum wage was raised to $15/hour, the vast majority who would see a raise are not teenagers, they’re 25 years and older.

But please don’t tell the Fraser Institute – you might interrupt their cartoons.