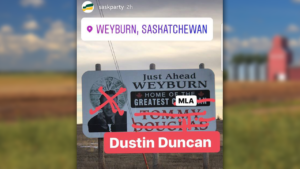 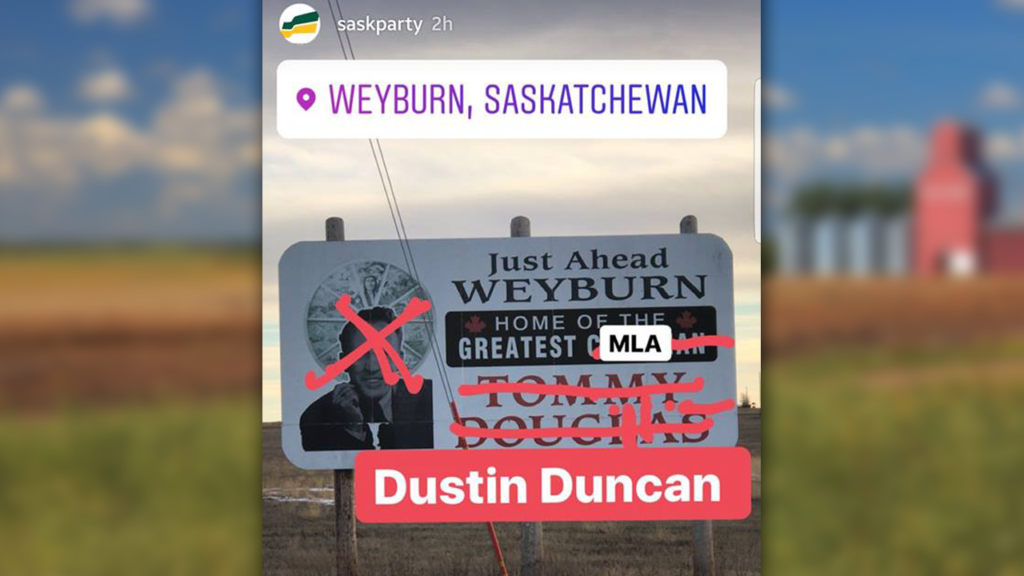 Saskatchewan’s governing party is apologizing after using its official Instagram account to deface a sign honouring Tommy Douglas, the former CCF Premier of Saskatchewan who is widely recognized as “the Greatest Canadian.”

An Instagram “story” that appeared on the party’s official account last week featured a digitally altered image of a billboard honouring the father of Canadian medicare outside his hometown of Weyburn, Saskatchewan.

Premier Brad Wall’s political party drew a bright red ‘X’ over Douglas’ face, crossed out both his name and “Greatest Canadian” title and replaced it with the name of current Sask. Party Environment Minister Dustin Duncan, MLA for the provincial riding of Weyburn-Big Muddy.

Instagram stories are designed to disappear from users’ newsfeeds after 24 hours – but not before this screenshot was taken: In a statement to PressProgress, Sask. Party Executive Director Patrick Bundrock said the party “deeply regrets the post,” explaining the party meant to “promote the local MLA, Dustin Duncan” and did not intend to “denigrate Premier Tommy Douglas in any way.”

The statement adds that “the Saskatchewan Party respects Mr. Douglas”:

“The Instagram post was posted by a staff person and done so as a way to promote the local MLA, Dustin Duncan. The Instagram story post has now expired. It was not intended to denigrate Premier Tommy Douglas in any way. The Saskatchewan Party respects Mr. Douglas and deeply regrets the post. The Saskatchewan Party will not be doing similar ones like it in the future.”

As Premier of Saskatchewan from 1944 to 1961, Douglas oversaw a series of sweeping reforms including the creation of public auto insurance, the modernization of public infrastructure and the passage of the province’s first bill of rights.

His efforts led to the creation of North America’s first ever system of public health insurance, a model eventually adopted at the national level.

Duncan, by contrast, led a push to privatize parts of Saskatchewan’s healthcare system when he served as the province’s health minister.