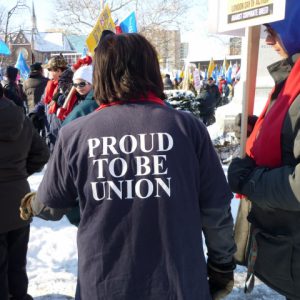 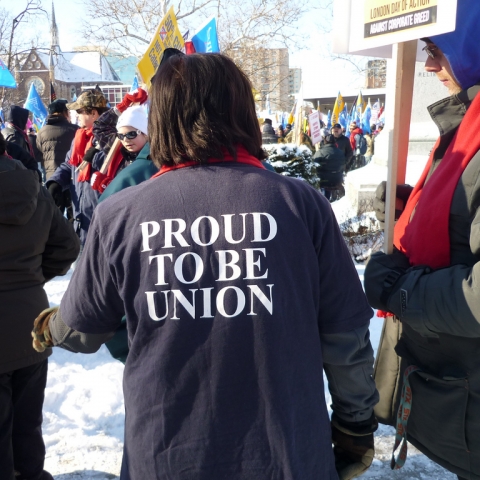 The Globe and Mail’s editorial board is pleading with Ontario Progressive Conservative leader Tim Hudak to pursue his idea of allowing union members to opt out of paying for activities not directly related to collective bargaining.  The conservative-minded newspaper chimed in with an editorial on Thursday after Hudak renounced the most controversial part of his […]

The Globe and Mail’s editorial board is pleading with Ontario Progressive Conservative leader Tim Hudak to pursue his idea of allowing union members to opt out of paying for activities not directly related to collective bargaining.

The conservative-minded newspaper chimed in with an editorial on Thursday after Hudak renounced the most controversial part of his 2012 “flexible labour markets” white paper. In a speech last week, Hudak said he no longer plans to bring in “right to work” legislation if elected.

The idea was to get rid of the Rand formula: while workers can choose whether to join a union, they must pay dues to the union if they are covered by the collective agreement negotiated with the employer. The formula, in place since 1946 to ensure there are no free-riders, had been on Hudak’s hit-list for the past two years as a way to weaken unions.

The brains at the Globe say Hudak’s pitch to scrap the Rand formula was “incoherent,” but the idea of opting out of paying for political advocacy and representation deserves “serious consideration.”

“It’s not 1946 anymore,” the editorial states, without acknowledging all the ways strong unions make for healthy communities.

Good thing the Supreme Court of Canada has already weighed in and ruled against the modified kind of right to work legislation the Globe is advocating.

The 1991 case involved a community college teacher, who’d opted out of the Ontario Public Service Employees Union but was still required to pay his union dues. Mervyn Lavigne was fine with paying for representation at the bargaining table, but didn’t want to pay for causes he disagreed with, arguing it violated his right to freedom of association under Canada’s Charter of Rights and Freedom.

The Supreme Court ruled against such an opt out on the grounds that it was legitimate for unions to express the interests of members outside the narrow confines of collective bargaining. The decision makes for great reading for the Globe’s editorial board:

The limitation on appellant’s freedom of association is justified under s. 1 of the Charter. The state objectives in compelling the payment of union dues which can be used to assist causes unrelated to collective bargaining are to enable unions to participate in the broader political, economic and social debates in society, and to contribute to democracy in the workplace. These objectives are rationally connected to the means chosen to advance them, that is the requirement that all members of a unionized workplace contribute to union coffers without any guarantee as to how their contributions will be used. The minimal impairment test is also met.  An opting out formula could seriously undermine the unions’ financial base and the spirit of solidarity so important to the emotional and symbolic underpinnings of unionism. The alternative of having the government draw up guidelines as to what would be deemed valid union expenditures could give rise to the implication that union members are incapable of controlling their institutions. Given the difficulty of determining whether a particular cause is or is not related to the collective bargaining process, the courts should not involve themselves in drawing such lines on a case-by-case basis.