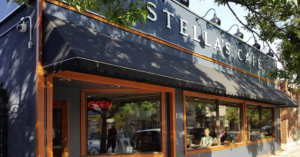 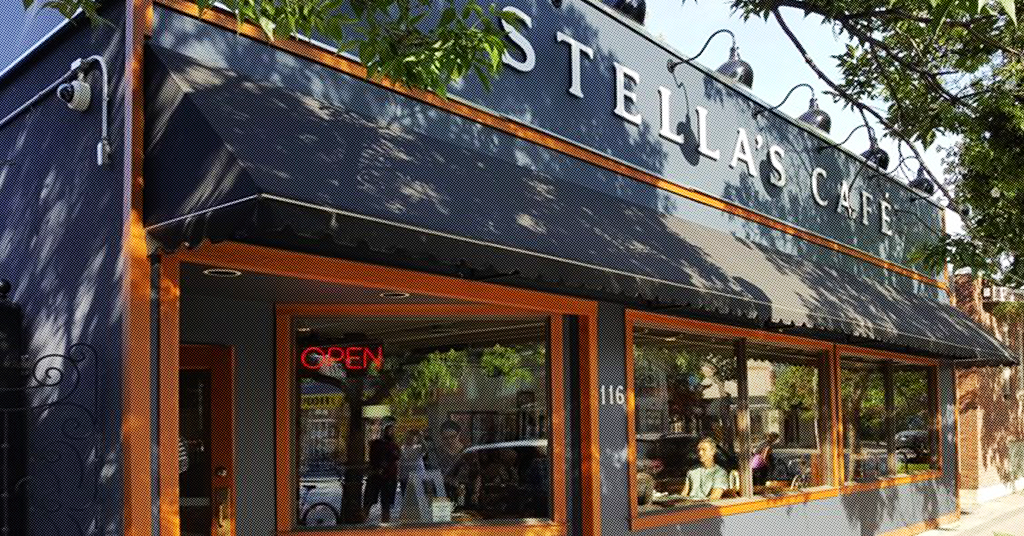 Between September to November 2020, unionized workers at Stella’s Cafe’s flagship location in Winnipeg’s west end were on strike.

Management listed the building for sale in November, claiming the union’s demands of giving long-time workers weekends off, minimum weekly hours and wage increases made it impossible to operate during a pandemic.

“Opening the Sherbrook location under the union’s demands isn’t possible,” Stella’s told Global News. “There is neither the time nor the financial resources to concentrate efforts on anything besides surviving the pandemic.”

Winnipeg restaurant chain Stella’s is closing another location, after workers there went on strike in September demanding better treatment. https://t.co/70K8lhNIrz

But there were a few things Stella’s management didn’t mention, including that they had actually been receiving federal wage subsidies and continued to keep their kitchen open for pickup and delivery.

According to Canada Revenue Agency records, that location and five other Stella’s entities, received the Canada Emergency Wage Subsidy (CEWS).

The CEWS program was launched to “help employers keep and re-hire workers amidst the challenges posed by the COVID-19 pandemic,” and currently subsidizes up to 75% of an organization’s payroll based on its revenue loss.

Stella’s did not respond to requests for comment from PressProgress.

Since unionizing, the union says management refused to abide by its contract, resulting in the union filing a high number of grievances.

Jeff Traeger, President of UFCW 832 said management had been trying to nip the union in the bud before more locations unionized.

“I think that once they started to see that there was going to be potential for some of these locations to get unionized, they’d be worried about that becoming a trend and that would change the industry dramatically.” Traeger told PressProgress.

“Obviously, the owners of these restaurants don’t want to see that happen.”

Workers at Stella’s flagship location first unionized two years ago after a grassroots campaign called #NotMyStellas called for an end to sexual harassment and more respect from management. 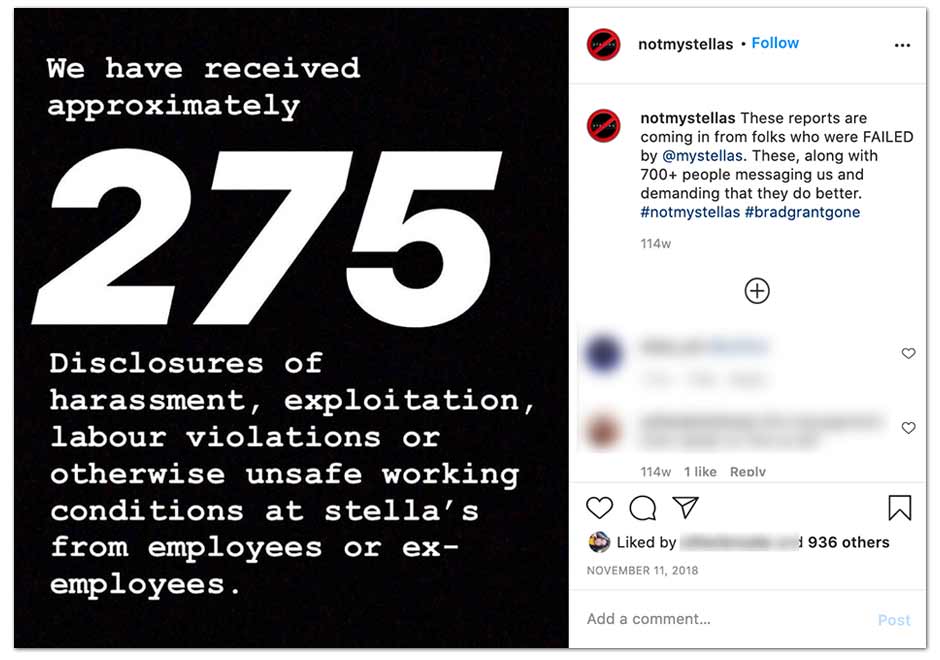 Fair scheduling and respect in the workplace formed the bulk of workers’ demands during a two month strike. The union also asked for a 25 cent wage increase for workers employed for over a year.

“We just wanted to fight to be treated like human beings in the workplace,” Zoee Wittmann, a former Stella’s worker, told PressProgress.

“Everybody was just really genuinely happy to actually be able to do something that will cause more of an impact than just being manipulated for the past few months.”

Wittmann alleges management tried to weed out vocal union supporters by not scheduling them according to their seniority or availability and punished union supporters by forcing them to take breaks in the middle of busy times and give up their tables and tips.

“It seemed like they were doing things like that on purpose so that they would no longer be working at that location,” Wittmann said. “People they were scheduling weird were very vocal about wanting the union and knew their workers rights and would argue for their rights with our employers.”

Stella’s management used a number of “intimidation tactics” during the strike, Wittman said. Management hired security guards and later boarded up the restaurant, removed the marquee, and listed the building for sale.

“It’s their main location, that’s the second busiest location, so it doesn’t make sense for them to close,” Wittman said. “It just seemed like they’re trying to scare employees again.” 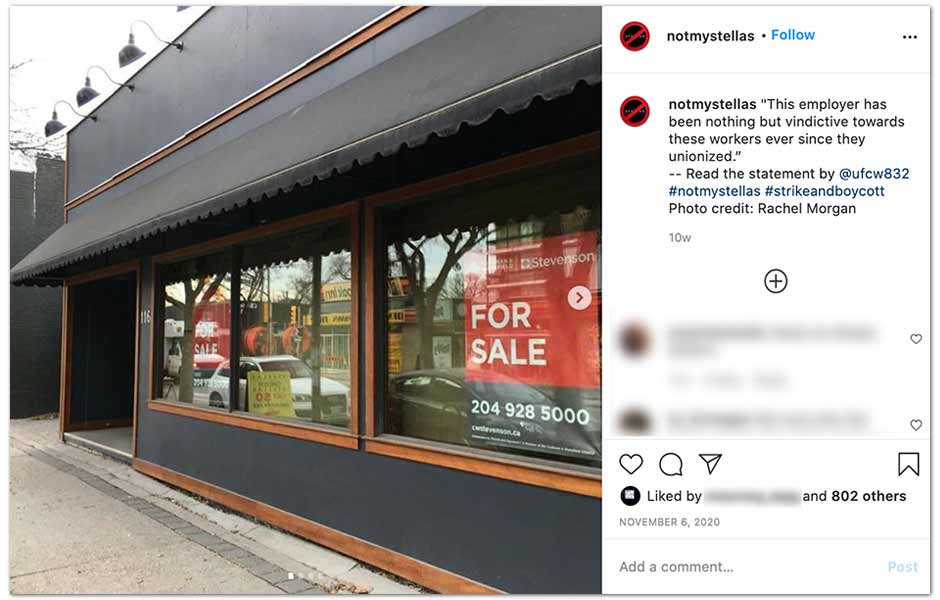 Despite telling local media they had shut down, one employee at Stella’s Sherbrook location confirmed to PressProgress over the phone that its kitchen remained open for takeout and delivery the whole time.

Management instructed delivery drivers and customers to pick up orders around the back in order to avoid the picket line, the union noted.

Traeger said the conciliation officer told the union Stella’s was “exploring all of their options to see what value their building could bring” but did not say they were permanently closing.

“The financial cost of the union’s demands was probably never the main reason for the employer’s aggressive stance because that cost was minimal,” David Camfield, a labour studies professor at the University of Manitoba, told PressProgress,

“I think the employer was intensely hostile to unionization because it would slightly limit its power over workers,” Camfield said. “The fact that they received any CEWS money further undermines the owners’ unconvincing claim that they couldn’t afford the union’s demands.”

The CRA database does not indicate whether or not Stella’s received CEWS during the strike and Stella’s would not clarify when asked by PressProgress.

Labour lawyer David Doorey says the loophole puts taxpayers and the federal government in the “improper position of taking the employer’s side in a labour dispute.”

“I suppose the feds would say that scabs are employees while they are working and therefore they should be treated as such for the purpose of the CEWS,” Doorey told PressProgress.

“The problem with this reasoning is that the CEWS amounts to a government subsidy to help the employer withstand economic pressure that might otherwise result from the work stoppage.”

Charles Smith, a University of Saskatchewan political studies professor who specializes in labour and constitutional law,  said the wage subsidy is inherently flawed as a means to support workers during the pandemic.

“You’re kind of assuming the relationship between workers and employers isn’t filtered with power,” Smith told PressProgress. “The employer maintains the power with the wage subsidy, and in fact in some ways amplifies it.”

“They assumed that employers have the best interests of workers at heart, which we know is a bizarre assumption given we know employers will act in ways that benefit the bottom line.”

The union has filed for an alternate dispute resolution, which allows the Manitoba Labour Board to impose a one year contract after a 60 day strike. The hearing is scheduled for February 11 and 12.