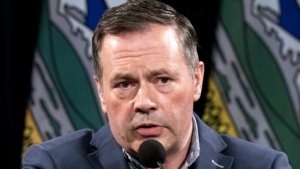 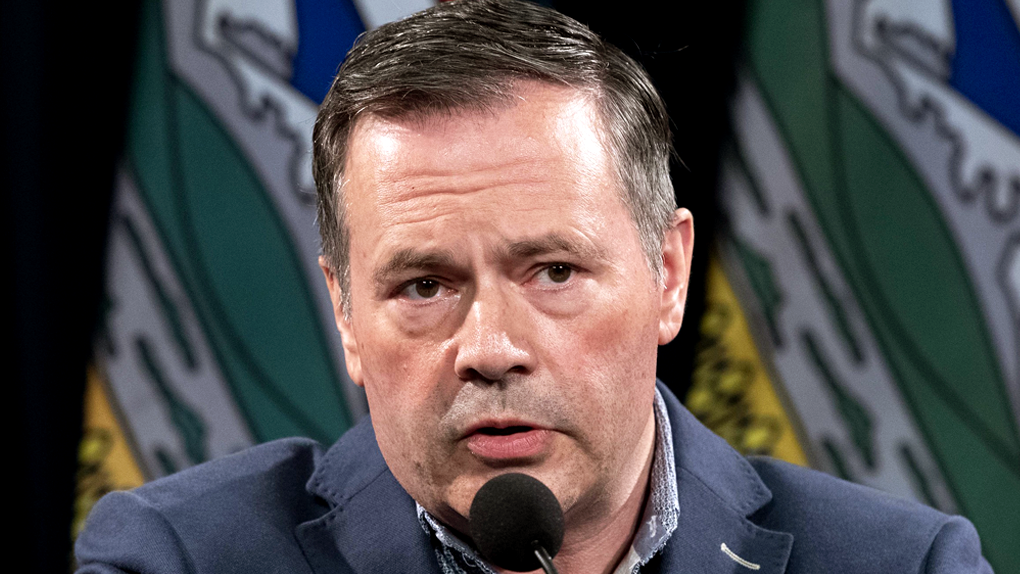 One of the proposed resolutions that will be up for a vote at this weekend’s United Conservative Party Annual General Meeting was submitted by a paid party staffer and appears designed to protect Jason Kenney from a growing insurgency to remove him as Premier of Alberta.

In fact, several proposals slated to go to a vote at this weekend’s UCP AGM would limit threats to the Premier’s power from his own party’s grassroots.

Here is the letter confirming that 22 UCP constituency associations have called for an early leadership review of Jason Kenney.

This would force a vote before March 1st- currently the leadership review is slated for April. #yeg #yyc #ableg pic.twitter.com/L4IFe7TSvC

Together, the 22 UCP boards represent a quarter of all UCP Constituency Associations, which is the same threshold needed to trigger a special general meeting to decide Kenney’s fate as leader.

Citing article 5.7 of the party’s bylaws, Jack Redekop, spokesperson for the 22 UCP Constituency Associations, has stated that the UCP rebels have already met the current one- quarter threshold needed to trigger an early leadership review.

The proposed Governance Resolution #2 would change the number of UCP CA’s required to trigger the leadership review from 22 CAs to 29 CAs –the proposal’s rationale explains that this is to prevent an insurgency within the party:

“One quarter of CA’s shouldn’t be able to over-throw a Leader. The bar is set too low and opens the Party up to trouble-making by a small minority of CA Boards.”

The proposal was submitted by the Edmonton Northwest constituency association, who’s president David Prisco is a paid Communications Director for the party.

Changes to article 5.7 will be a top voting priority at this weekend’s AGM. 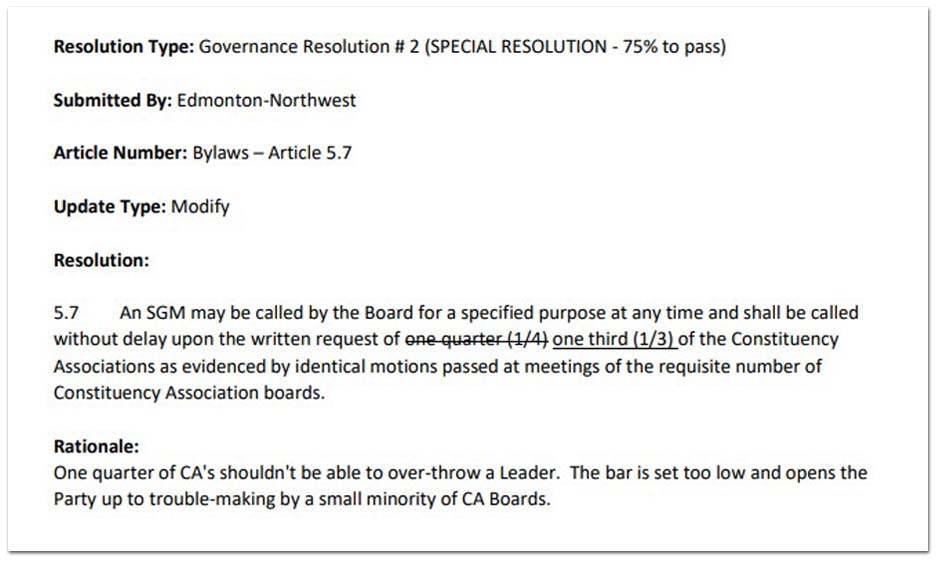 Kenney’s leadership review is currently set to occur at the party’s AGM next year, where members will only be able to vote in person. The 22 UCP rebelboards want voting on Kenney’s leadership opened up to all members, with a fixed voting day before March 1st.

An earlier vote, Redekop said, would allow all members to vote from home rather than those in attendance at next year’s AGM.

At least one member of caucus, Peter Guthrie, has accused Kenney’s loyalists of attempting “the apparent manipulation of the AGM” surrounding the leadership question. 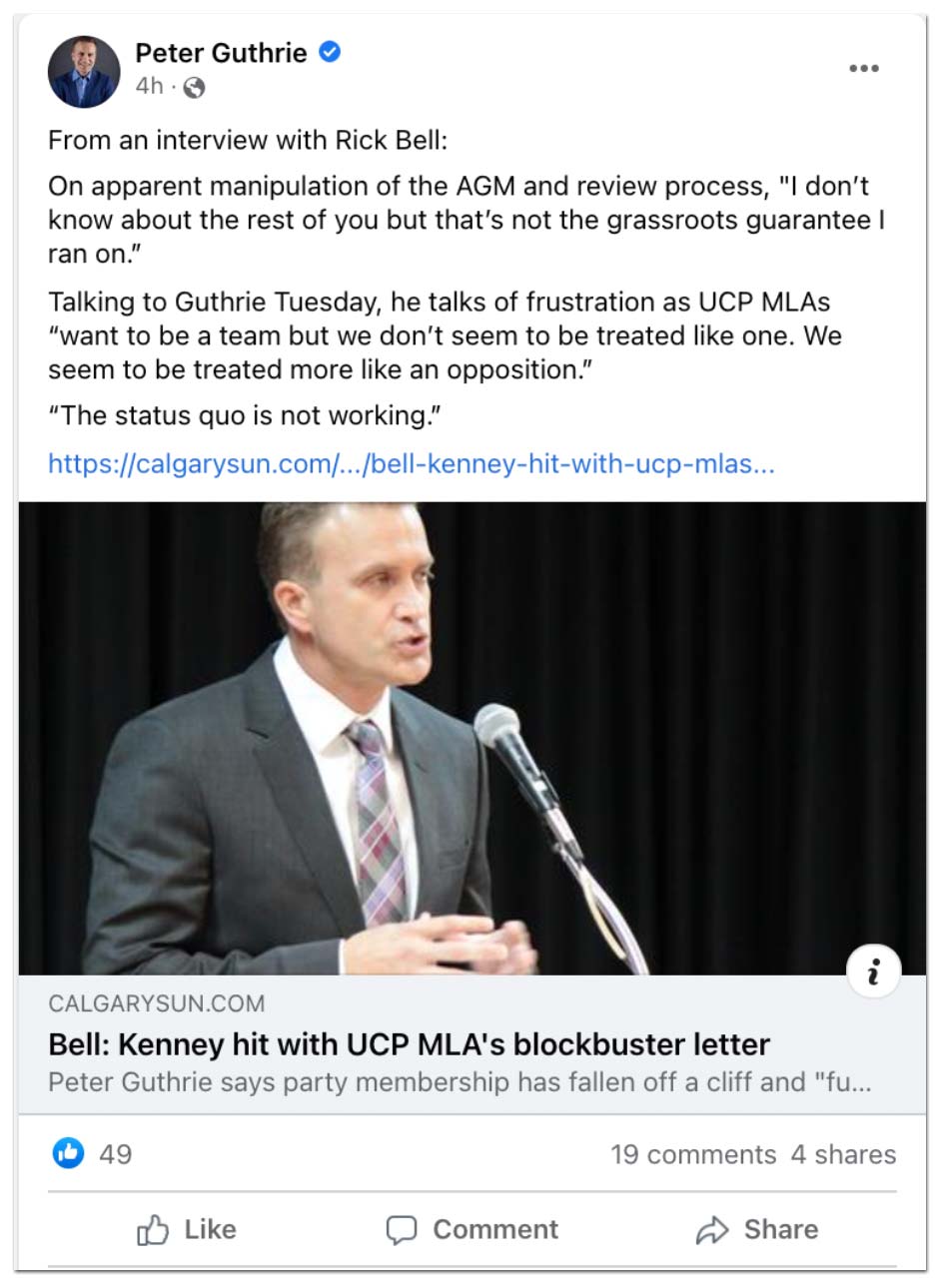 Guthrie read a letter to the Premier in a closed door caucus meeting this week amid what he describes as growing frustrations among caucus and constituents, as well as concerns about the party’s future.

Guthrie has alleged hearing “from multiple direct sources” that money from third-party PAC is being used to bus Kenney loyalists to the AGM.

On Wednesday, the Alberta NDP cited Guthrie’s allegations in a letter to Alberta’s Election Commissioner demanding an investigation.

I have just sent a letter to @ElectionsAB CEO Glen Resler asking for an investigation into alleged violations of Alberta election law.

The allegations that big money is paying to support Jason Kenney at his AGM are serious threats to democracy.#ableg #yeg #yyc #yql pic.twitter.com/2Vy7zK4csW

Mount Royal University political science professor Keith Brownsey says the UCP rebels are being “politically naive” if they think they can reverse their fortunes simply by ousting Kenney.

“Albertans have made it clear they’re not happy with (Kenney’s) leadership, but really they’re just not happy with the party,” Brownsey told PressProgress. “No matter what they touch, it seems to disintegrate.”

“If the party thinks that replacing Kenney with Brian Jean will produce a better result they’re very wrong.”

Special Proposal #2 must receive 75% support at the AGM to pass.