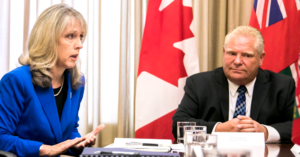 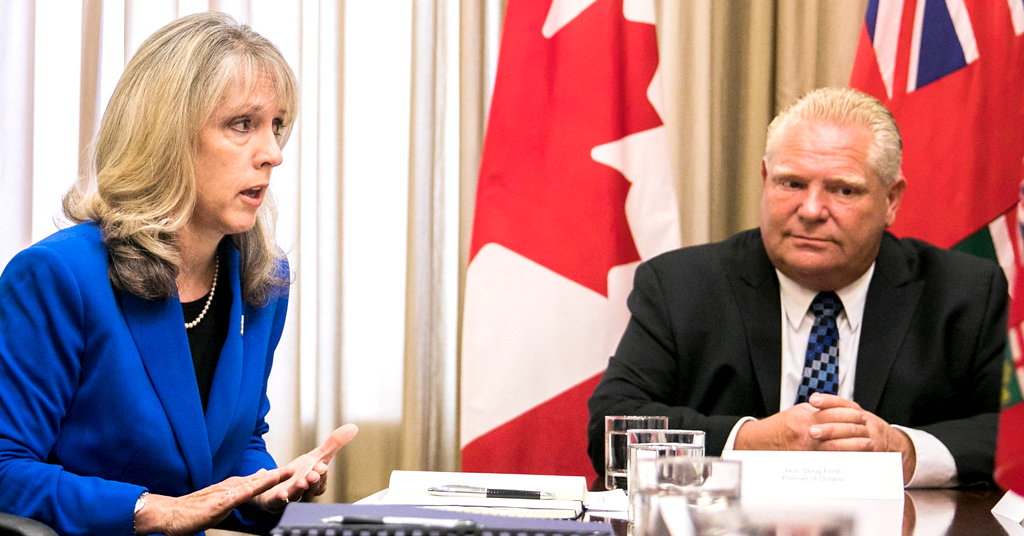 Disability advocates warn the Ford government is planning to include “targets” for these “System Managers” to push low-income people off of income support — and into whatever work they can find.

Last fall, a Tender Notice from Ontario’s Ministry of Children, Communities and Social Services offered private companies the chance to take over the ODSP and OW job training services.

One of the most prominent companies shortlisted was Maximus Inc. The Virginia-based social service company earned a reputation managing Conservative benefit cuts in Britain, in southern Republican US states and, most recently, aiding former US president Donald Trump’s efforts to “make the poor work for Medicaid and food stamps.”

An American firm that made millions off Donald Trump’s plan to ‘make the poor work for Medicaid and food stamps’ wants the contract. https://t.co/0y4OjpMEWH #onpoli #canlab

More recently, both Maximus and Serco – another “welfare to work” outsourcing company implicated in the British Conservatives’ infamous benefit overhauls – were both listed, alongside select municipalities, as “qualified vendors” by the Ministry.

Importantly, as recently as November 13, Maximus lobbyists met with provincial officials in Ontario to secure a contract “to become a service system manager in the government’s employment services transformation.” Serco, most recently, met with Ministry of Safety and Correctional Services representatives in 2019.

Serco declined requests for comment from PressProgress, confirming “we are a qualified vendor for employment services in Ontario but as the bidding process is ongoing it would not be appropriate for us to comment.”

Maximus also declined requests for comment, telling PressProgress: “We are not able to provide you with any comments during the active procurement process.”

Two other documents from the Ministry further lay out that the contracted “service system managers” (SSMs) will be tasked with “integrating” employment services for both OW and ODSP.

Back in 2019, as the province first proposed to fold the Employment Services together, under the joint direction of the Ministry of Labour and the MCSS, it aimed explicitly to “decrease dependence on income assistance.” Since then, this language has been reiterated in tender notices.

According to a report to Gray County Council obtained by PressProgress, that will mean service managers face “clawbacks” if they fail to meet set targets to move recipients into the workforce:

“There is an expectation by the province that the Service System Manager will take on an element of risk. Some portions of the funding to provide the service are based on meeting targets for getting people into employment and ensuring that they maintain this employment. Failure to meet the targets will result in a smaller transfer payment or clawbacks. This introduces uncertainty into the budgeting process and the potential for budget shortfalls that would need to be made up from the levy as the county’s labour costs are fixed and not able to be quickly adjusted to align with performance outcomes.”

While Gray County did not respond to requests for comment, a spokesperson for the Region of Durham confirmed the Ford government’s proposed Performance Management Framework “follows performance-based funding” which would be based on social assistance recipients’ entry into the “labour market.”

“We’re very concerned about this happening,” Kobluk said. “If the pay-per-performance model was to trigger smaller transfer payments to municipalities/regional governments acting as SSMs, it could put pressure on them to push people into jobs before they’re job-ready.”

Specifically, Kobluk said, it appears that many of the recipients affected will be “‘stream c’ referrals” – those deemed at “high risk” of “long-term unemployment” by the province – and little extra support has been promised to help them prepare.

“There has been very little presented in the province’s plans to indicate that these individuals will be properly supported through expansion of robust pre-employment services such as ESL training, housing needs, and childcare,” Kobluk said.

That, Kobluk warned, could further trap people in low-wage work.

“If you want to support people into good, permanent jobs, any kind of quota system is not going to work,” Kobluk said. “There has been no transparency with outcomes at the first three prototypes and a major lack of clarity on measurements of success.”

Kobluk said this could end up like the “pay-per-performance” funding systems seen in the UK and Australia which “often results in low job placement rates into low-wage, precarious and contract jobs.”

“From our understanding, the new model is, at least at this point, primarily being directed towards current OW clients, while also being used to stream new applicants away from ODSP towards ‘life stabilization’ (and into jobs) using the CAT (Common Assessment Tool), even if the applicant’s doctor has indicated they cannot work,” Manson said.

“It fails to acknowledge the fact that many folks with disabilities simply cannot adhere to a hard schedule that comes with employment. Schedules are predictable. Disability is anything but,” Manson added.

“Quotas that measure success based solely on how many people are moved off social assistance into employment run the risk of pushing people out without necessary supports or standards,” Natalie Appleyard, socio-economic policy analyst with Citizens For Public Justice, said.

Further, Appleyard said, “a disability or caring responsibilities may make it impossible for someone to participate in the paid labour force.

Ontario’s Ministry of Children, Communities and Social Services did not respond to requests for comment from PressProgress.