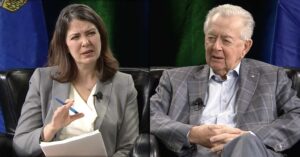 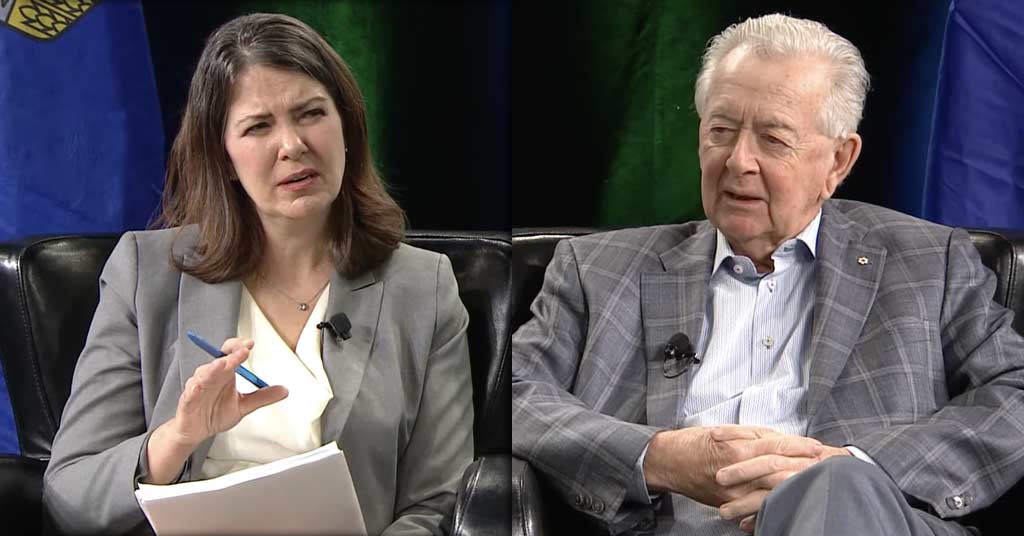 Last year, Preston Manning wrote a bizarre speculative fiction where doctors, academics and the media are hauled before a kangaroo court

Imagine a future where members of the so-called “Freedom Convoy” haul doctors, academics and the media before kangaroo courts to prove they have participated in a vast conspiracy with the government to use the pandemic to undermine Canadians’ Charter rights.

Manning, the former head of the right-wing Manning Centre, will receive $250,000 to chair a committee reviewing the province’s response, Smith announced Tuesday.

Manning’s earlier report, published in May 2022, was written as a speculative fiction for a right-wing think tank called the Frontier Centre for Public Policy. The report calls for defunding the CBC and overhauling Canada’s public health care system.

It imagines an entirely fictional future scenario where public health experts, academics, federal bureaucrats and the “mass media” are called to account by a “citizen-led” commission – a scenario that has some eerie parallels with fantasies among COVID conspiracy theorists and the far-right about a so-called “Nuremberg 2.0.”

The 46-page report details how Manning imagines a commission into the federal government’s pandemic response would play out, complete with conclusions and recommendations – to be sure, Manning has a lot of blame to go around.

“Predictably, while most of the mass media and academia went along with the channel change strategy, the vast majority of rank and file Canadians did not. It was their conviction that the Prime Minister’s pronouncements on an alarming international crisis were as insincere and misguided as his pronouncements on the COVID crisis at home.”

Manning’s fictional commission, which consists of a mix of outcast lawyers, “cancelled” doctors, small business owners and economists, interrogate those Manning believes to be responsible for public health rules.

Academics, “headline hunting media” and government bureaucrats are found complicit in various ways for a number of violations of the charter, including the use of “fear” to promote compliance with public health rules.

Or as one fictional witness, a “former communications staffer” tied to the Prime Minister’s office tells Manning’s fictional commission:

“The Canadian mass media were quite amenable to communicating and expanding our use of the war analogy. The Globe and Mail, for example, on September 21, 2020, boldly advised its readership that “Canada is at War.” Most of Canada’s major media are now either reliant on outright direct government funding (the CBC, for example) or dependent upon online user engagement.”

This isn’t the only instance where Manning singles out CBC:

“Why did mass media organizations like the federally subsidized CBC, abandon their responsibility to provide full and free investigative reporting of the COVID crisis? Why did they become unabashed mouthpieces and apologists for the federal government and the healthcare bureaucracy?”

Manning also writes of a vast conspiracy to suppress the scientific community.

“As the Chief Commissioner declared, “Science filtered through the mindset of bureaucrats, politicians, and headline-hunting media, and communicated to the public through them, is not the genuine science that needs to be brought to bear on a health crisis such as the COVID pandemic.”

Manning’s story poses a final question of whether those found legally responsible by Manning’s fictional COVID Commission should be punished in a parliamentary vote.

“I leave you, dear reader, with this question: If you were a member of that House, how would you vote on this issue—to proceed with legal action against those found responsible for the mismanagement of the pandemic response, or to simply “move on,” content with having replaced the federal government responsible and Canada having learned the costly managerial and political lessons taught by the COVID experience?”

Smith’s panel will be given a budget of about $2 million. The final report with recommendations is due in just under 10 months.