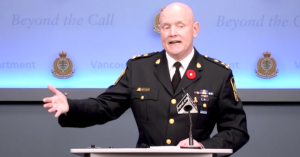 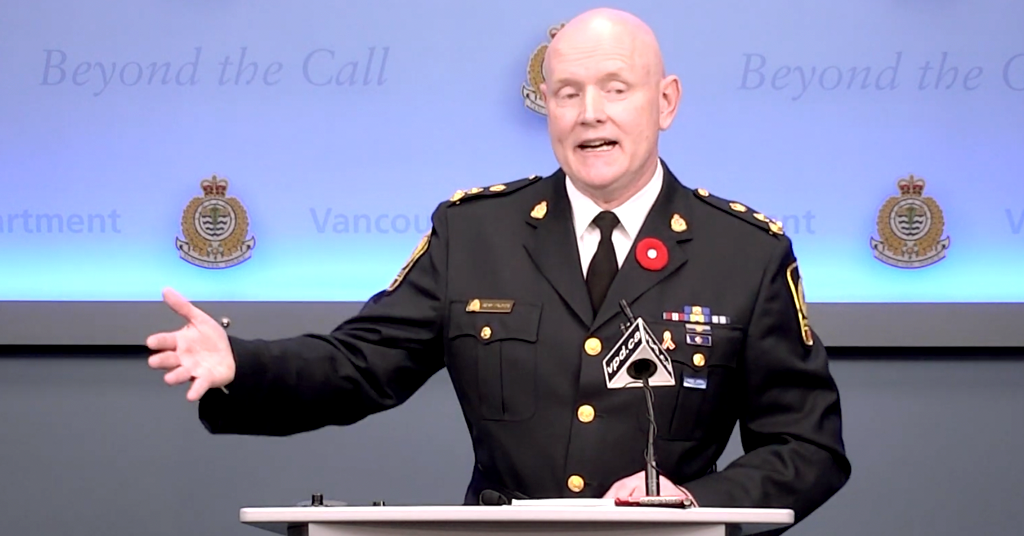 Helpseeker, a Calgary-based ‘social impact’ firm, has been hired to produce reports for police in Edmonton, Vancouver and Ottawa

Police across Canada are hiring a Calgary-based tech startup critics say is helping police produce “copaganda” to justify expanding their budgets at the expense of social services.

HelpSeeker Inc. has most recently worked with police in Vancouver to produce data that was used as the basis for a report widely criticized as “misleading nonsense.”

Last week, a report authored by the Vancouver Police Department quantifying how much is spent on social services in the city with a focus on the Downtown East Side, was leaked to the media. The VPD report uses HelpSeeker’s data that places a $5 billion dollar price tag on Vancouver’s “social safety net.” 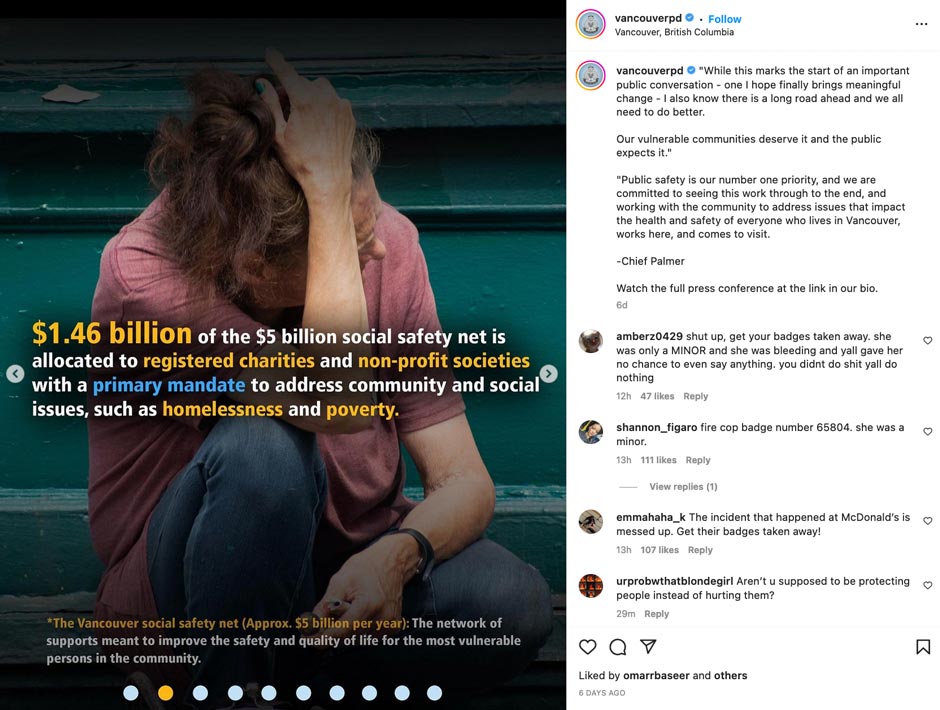 In a press conference, Vancouver Police Chief Adam Palmer pointed to HelpSeeker’s work as evidence the situation on the Downtown East Side is “deteriorating.”

“This HelpSeeker analysis suggests that there was already loss of money in the system,” Palmer said. “But there’s also an increasing body of evidence that suggests this money isn’t being used in a way that best serves the people who need it the most.”

HelpSeeker created a similar report called “Money in the System” for the Edmonton police, setting a $7.5 billion price tag for social services. This number is being used to argue for a new funding formula for policing before Edmonton City Council.

Upon closer look, it appears that the estimates for both city’s social safety nets are inflated, before being juxtaposed with local policing budgets.

Both reports suggest inefficient spending on social services by lumping together programs from all levels of government, including billions in Federal transfers from the Canada Pension Plan, Old Age Security, Employment Insurance and child tax benefits.

This is one of the pages in the VPD summary of the report. I assume VPD will not release this summary tomorrow because it’s embarrassingly bad, and instead focus on the other 81 page report. pic.twitter.com/9JplONVtho

Here’s some charitable orgs (based on CRA address for Vancouver) the report adds up into a $1.4b a year calculation to the social safety net spending, which is part of the $5b annual total.
Includes all BC’s Legal Aid revenue. And revenue for BC forensic clinics.
Plus horses. pic.twitter.com/8oKJDXZqZK

According to Tyson Singh, a front line social worker on the Downtown Eastside, these inflated numbers are a way of framing the VPD’s budget for this year.

“The reason they chose to kind of conflate all these numbers into one giant lump sum, including their own budget, is kind of clear,” Singh told PressProgress.

“There’s a small graphic that shows the amount of funding going towards the Vancouver Police within this giant $5.1 billion number, and it shows that it’s 6%. And I think what the police are trying to do with this giant number is show how little (is) actually going towards policing.”

A motion to hire 100 police officers and 100 nurses was set to go before Vancouver City Council just a week after the HelpSeeker report was leaked.

The motion mentions the VPD’s mental health initiatives, and expresses that the “magnitude of the mental health and addiction crisis facing Vancouver requires a significant and substantial increase in supports and actions.”

It proposes a budget increase of $4.5 million for the VPD.

“We tried to quantify as much as we can find of the social safety net,” Turner said. “What percentage of that five billion dollars actually makes it to the most complex and most vulnerable versus at-risk populations versus general public well-being?”

“If we talk about the 5 billion and we associate that with, with complex needs only, then we might be missing the nuances.”

“We’re not misleading the public,” Chief Palmer said at the same press conference. “The overall methodology is solid and we stand behind it.”

“Different authors, different reports,” Donaldson said. “We did not suggest or infer at any point in the HelpSeeker authored report that direct transfers are aimed at the Downtown East Side.”

The Edmonton report recommends greater integration and collaboration between Edmonton police and other social services.

Among the report’s recommended “immediate actions” were an “Integrated Investment Framework” for any funded or government-delivered interventions, and to “enhance collaborative, on-the-ground efforts among social, health, and police partners to augment police interventions.”

Last year, Edmonton Police Chief Dale McFee joined HelpSeeker cofounder Alina Turner on a HelpSeeker webinar, where he gave a presentation as a “social innovation and community leader,” and advocated combining public health and policing into a single ministry.

“Someone asked me in a media interview probably 8 months ago, Chief if you were king for a day what would you do, and I said I’d probably take the police out of the justice system, and I’d take public health out of the health system, and I’d put them in the same ministry with the not-for-profits,” McFee said in the webinar. 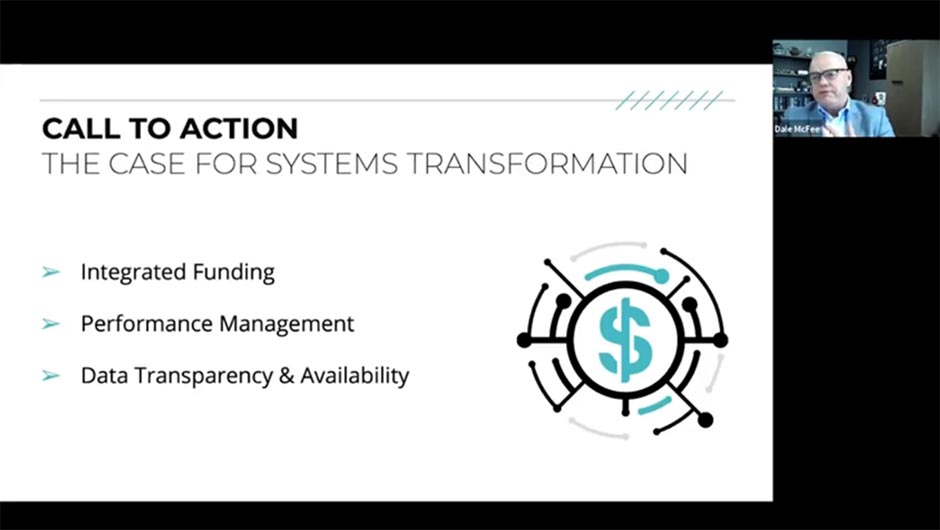 McFee and Turner have another connection. Turner sits on the board of the Community Safety Knowledge Alliance, Inc, an organization that lists seven police services as its members, and of which McFee is Chair and President.

Edmonton City Councillor Michael Janz, who described the report as “copaganda,” says the police are using “selective data” to bring social work and housing into the EPS, and to distract from police budget scrutiny.

“It’s concerning because it shows a gradual move by police. As the public started demanding more social workers, more counselors, fewer police, the police now are kind of trying to rewrite their job description and insert themselves into social services,” Janz told PressProgress.

“And it’s kind of Manufacturing Consent to look at homelessness, to look at harm reduction, to look at addictions this way, as the police industrial complex continues to grow bigger and bigger.”

Temitope Oriola, a Professor of Criminology at the University of Alberta told PressProgress, said the fact that the report was produced through police funding created problems with HelpSeeker’s data.

“The reports produced so far by HelpSeeker (for VPS and EPS in particular) appear to engage in obfuscation of categories of funding, analytical abrakadabra and problematic conclusions,” Oriola told PressProgress.

“Such analyses can lead to confusion given the categories of funding that are thrown into the equation. That may divide public opinion as numbers are curated in ways that may confound even non-discerning elected leaders. The analyses are capable of diverting attention away from the real issues, particularly in relation to growth in police funding.”

Among the report’s recommended “immediate actions” in Edmonton was an “integrated investment framework” for any funded or government-delivered interventions, and to enhance collaborative, on-the-ground efforts among social, health, and police partners to augment police interventions.

“A properly resourced police service has its role in creating a healthy society,” Oriola said. “However, many social problems are not strictly speaking policing problems.”

“Police services across Canada, including the EPS, have demonstrated that they are ill-equipped to deal with social problems such as drug addiction, homelessness, poverty, and mental health problems, among others.”

HelpSeeker spokesperson Jesse Donaldson said the framework is intended to respond to calls for more socially-minded approaches to policing.

“Police agencies, alongside service providers, and all levels of government are rightly being asked to do more to address the harm experienced by individuals, families and communities facing adverse social outcomes,” Donaldson explained. “We feel that improvements to a social safety net response should start with an analysis of what exists today, that includes financial investments.”

Additionally, HelpSeeker was engaged by Ottawa Police Services in 2021 to provide a “Social Impact Audit.”

One purpose of the audit, according to an OPS report, was to help the city “Transform Ottawa’s social service infrastructure while contributing to the OPS’ ongoing efforts to revision the role of policing in the social safety net ecosystem.”

Lobbying records show the company has also received funding from other police services including in Toronto, Peel, Waterloo, Lethbridge, and Winnipeg.

HelpSeeker has received $2.5 million from the Federal government to help it expand across the country.

Clarification: This article has been updated to include additional comments from HelpSeeker making clearer that the report released to the public was authored by Vancouver Police but relied on data from a separate report that HelpSeeker submitted to Vancouver Police.