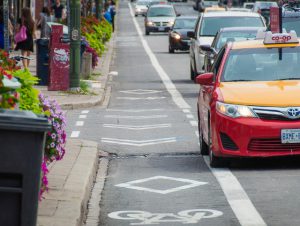 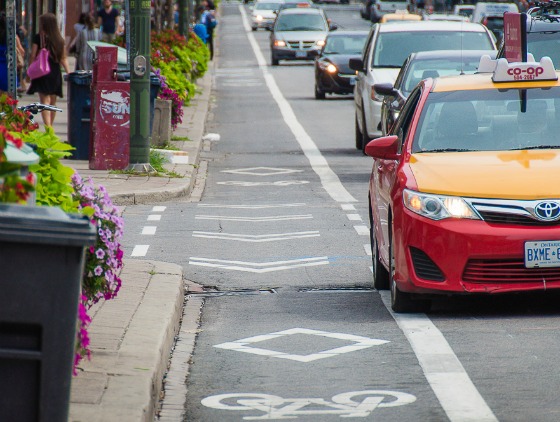 So much for sober second thought!

In the greatest shocker of the year, a Conservative Senator who belongs to one of the most elite families in Canada isn’t a big fan of the bicycle.

Nicole Eaton, appointed to the Senate by Stephen Harper in a 2008 bonanza of patronage, took to Twitter last week to complain about Toronto’s newest bike lanes.

Bloor St, what a disaster. Can you imagine closing two lanes of Fifth Avenue to accommodate a few bicycle riders. Are city planners riders.

This isn’t the first time Eaton has whined about cyclists and bike lanes.

Earlier in the month, she complained they were making Toronto “a mess” and a “third world country”, channelling the bogus “War on the Car” rhetoric of the Rob Ford era.

Why is TO such a mess?instead of bicycle lanes what about park maintenance, road paving and sidewalk fixing instead of patching up

The rant reached its climax when Eaton, who has a well-paid job for life and an expense account paid for by taxpayers (to whom she had to repay thousands last year because of questionable expense claims), tried to portray cyclists as people who don’t pay their fair share and bicycles as “a luxury”.

Keep forgetting cyclists pay lots of road taxes, so why worry about cars and pedestrians.

Bicycles are a luxury, most of us use public transportation or walk. Never seen a bike rider obey traffic laws. They are special.

But maybe Senator Eaton has a point? After all, it’s damned annoying that Bloor Street’s new bike lanes make it slightly harder to access the basic life necessities on sale at Gucci and Holt Renfrew.

Then again, facts probably speak better than the anecdotal complaints of a single, privileged Canadian Senator. Cyclists and others who may have actually ridden a bike during the past decade were quick to respond with a few of them.

Do Canadian cities really pour money into bike lanes at the expense of things like roads and park maintenance? Well, about that…

As University of Alberta Professor Andrew Leach pointed out, Toronto’s current budget for road repair stands at a whopping $4.2 billion, transit at $1.8 billion.

Bike lanes, as you can see, receive just a wee bit less:

And here are a few of the delays being caused by ongoing road construction in Toronto at the moment. “World class” cities tend to have bike lanes. Lots of them.

When we think of famously run down, “third world” cities, our go-tos are places like London, Copenhagen, Amsterdam, and Paris, right?

The fact is, all of these elegant and well-planned cities have better cycling infrastructure than Toronto and leave many other Canadian cities in the dust.

@SenEaton Was in London 3 weeks ago, bike lanes everywhere. Also Amsterdam, NYC, and Edinburgh. You should travel.

A 2015 study published by Wired ranked Paris as the 17th best city in the world for cyclists (Copenhagen beat out Amsterdam, with the two cities placing first and second respectively).

London may not have made the list, but even its former Conservative mayor approved an 18-mile stretch of segregated bike lanes right through the centre of the city.

Oh, and Fifth Avenue in New York? Toronto expat Ivor Tossell just happened to be in the area and, well…

Hello from New York, @SenEaton. I just walked over to 5th Ave, WHERE THEY BUILT A BIKE LANE. pic.twitter.com/zEshadtLoN

Are cyclists really freeloaders who don’t pay for roads, unlike hard done by drivers of cars and SUVs as Senator Eaton and others like her claim?

It’s not clear where exactly this myth comes from, but it’s just that: a myth.

The operating budget for Toronto Transportation Services receives the bulk of its funding through property taxes. Which means that everyone, either directly or through their rent, contributes.

Thousands of Torontonians travel by bike every day, and help the environment by doing so

@SenEaton A few? Bloor/Harbord are packed w/ cyclists all the time. Reduces cars on road. This city will go nowhere if we only acc. drivers.

A 2010 study conducted by the City of Toronto found that some 19,162 cyclists entered the downtown core in a single 12 hour period between 7 AM and 7 PM, even in spite of the inadequate cycling infrastructure.

In 2012, Ontario’s transportation sector comprised some 34% of the province’s total GHG emissions. And according to environmental lawyer Albert Koehl, emissions from that sector soar nearly as high as those produced by Alberta’s oil sands.

And bike lanes, if well-planned, don’t even contribute to traffic congestion.

When it comes down to it, bicycles are just another form of traffic – not any less legitimate than cars, trucks, or SUVs. Cyclists, however, do tend to be a bit less pampered than many of the people who make a hobby out of complaining about them…

.@SenEaton Bikes aren’t a luxury. Being a Senator is a luxury. Never seen one of those obey finance/fraud laws either, now that you mention.