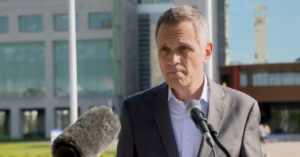 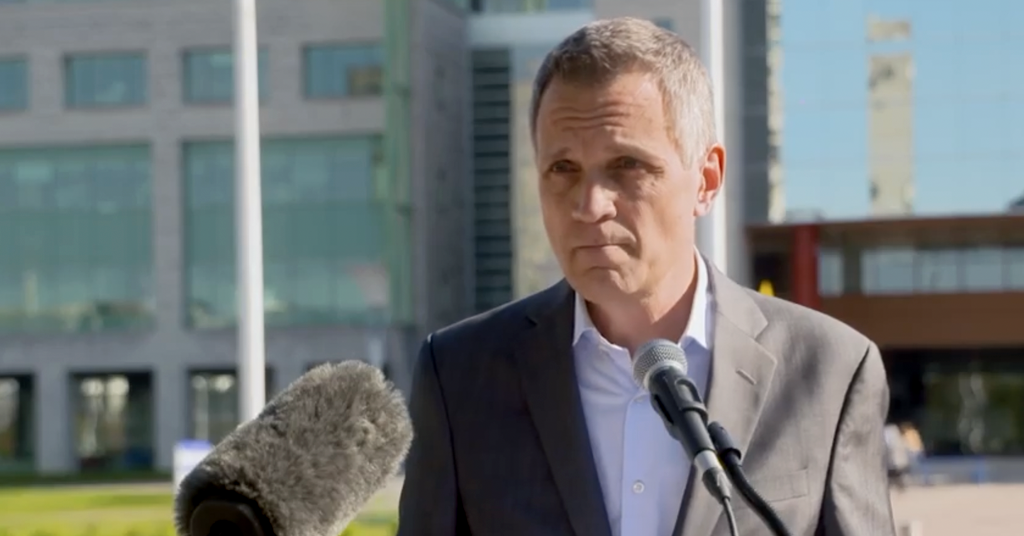 During his time as a local newspaper columnist, mayoral candidate Mark Sutcliffe advocated for the elimination of all funding to community festivals that rely on support from the City of Ottawa.

“It’s too much like a parent handing out more and more cash to a teenager who never learns how to look after himself,” Sutcliffe wrote.

“The city should give the festivals fair warning and wean them off the grant program over the next three years.”

“It would be a shame to see any festival disappear, but it’s not really the city’s responsibility to make sure they don’t,” Sutcliffe added. He suggested that defunding festivals would force them to sink or swim, ensuring only “the best ones would survive.”

Sutcliffe is a longtime local media personality with cozy ties to the city’s business community who has been endorsed by some of the most right-wing politicians in Ottawa, a list that includes Jan Harder, Lisa MacLeod and John Baird.

Sutcliffe’s comments appeared in a June 2006 edition of his Ottawa Citizen column in the period leading up to a municipal election that ultimately saw Larry O’Brien elected Mayor of Ottawa.

Titled “Festivals should be weaned from city funding,” Sutcliffe derided the “culture of dependency” among community groups in Ottawa, including groups representing francophones and the LGBTQ community.

“Barely a month goes by without some event coming to city council for a handout. This month it was the Pride Festival. In March and April, it was the Canadian Tulip Festival and Franco-Ontarien Festival,” Sutcliffe wrote.

“Quite often, councillors feel they have no choice but to cough up the cash, lest they be blamed for the failure of a popular event.”

Sutcliffe also questioned the size of grants to the Jazz Festival and Ottawa Chamber Music Festival, suggesting funding levels were being determined by the personal music tastes of city councillors.

Mark Sutcliffe’s campaign did not respond to multiple requests for comment from PressProgress about the statements contained in his column.

During the current election campaign, Sutcliffe has touted music festivals as a way to attract tourists and generate economic activity downtown. However, this message stands opposite to what Sutcliffe wrote in 2006.

“It’s not really the city’s job to be a concert co-promoter,” Sutcliffe wrote.

“If festival funding is meant to attract more visitors to the city, they are not the best investment,” Sutcliffe added.

“And you can’t believe the dubious numbers thrown around by the organizers of some festivals. The Tulip Festival, for example, claims that it generates $50 million in economic benefit for the city. I’d like to see the breakdown for that.”

The Tulip Festival was established to celebrate Canada’s friendship with the Netherlands following its liberation from Nazi occupation by Canadian soldiers during World War II. Prior to the pandemic, the National Capital Commission pegged attendance at 700,000 visitors in 2019. 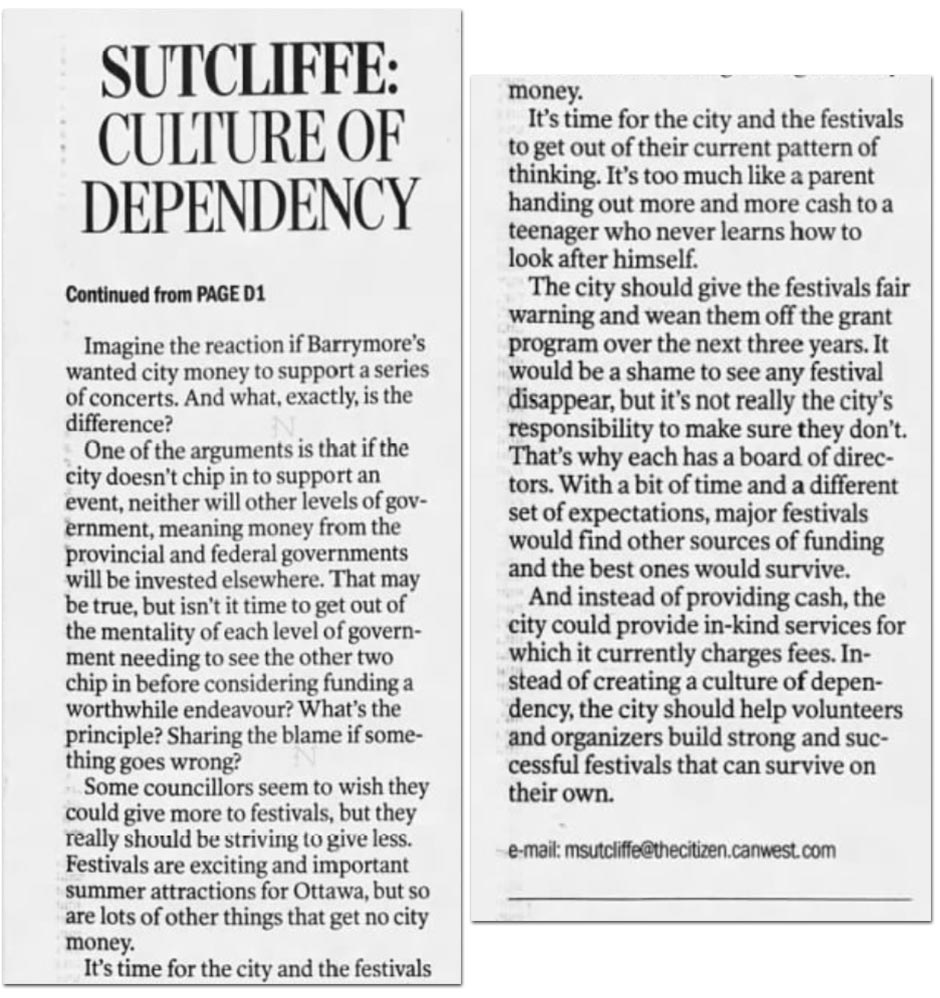 At the time, Sutcliffe was criticized by festival groups in Ottawa, who disputed the accuracy of several claims and accused the columnist of using rhetoric that likened local festivals to drug addicts.

“Mr. Sutcliffe uses the term ‘weaning off’ to describe slowly removing funding from festivals over a period of three years, much the way a heroin addict might try to break his habit,” wrote Festivals Ottawa President Julian Amour.

In a statement to PressProgress, Capital Pride said local festivals generate over $222 million for the local economy and $122 million in tourism activity for Ottawa.

“Our annual Festival creates opportunities for the 2SLGBTQ+ community to celebrate and advocate,” said Capital Pride Executive Director Toby Whitfield, adding Pride allows “people to be themselves and see they are welcome and included in our city” and helps “400 volunteers to gain new skills and develop new friendships.”

“There is a big difference between for-profit venues and non-profit festivals that are doing important community building work,” Besler said. “They’re not in it for the money.”

“It is forgetting that non-profit organizations, which most of our festivals are, have missions and goals that contribute to our community that are not just profit-based.”

Besler, who has publicly supported Catherine McKenney for mayor but clarified she has no role with their campaign, explained that the Festival Franco-Ontarien helps to develop and promote young and emerging Franco-Ontarien artists.

“These moments are essential for the survival of francophone communities,” Besler added. “People need to be able to access arts in their language, they need to see themselves portrayed in different kinds of media.”

Veronica Roy, Executive Director of the House of Paint festival which celebrates local hip-hop culture, said she is hopeful that Sutcliffe no longer holds these views, but felt angered by his “flippant and dismissive” tone.

“I think it was flippant and it was rude and I would like to see a retraction,” Roy told PressProgress.

Roy said research shows festivals are profitable for the city, but noted that Sutcliffe’s column also “seemed to specifically target cultural festivals,” adding many festivals are important to “people who don’t feel represented in mainstream culture.”

“These are places where people who have a common identity come together to celebrate and belong and you can’t quantify that with a dollar amount.”