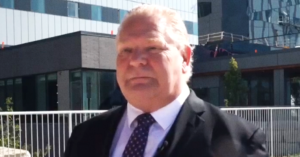 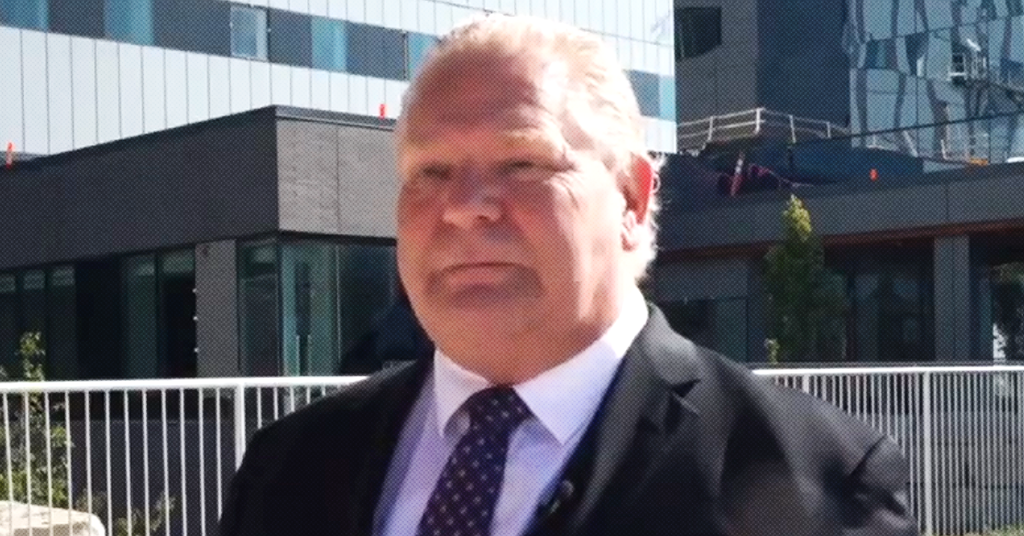 The Mackenzie Health Centre has been renamed the “Cortellucci Vaughan Hospital” in honour of Mario Cortellucci, a Senate candidate for Italy’s far-right political party  and a top donor to Ontario Premier Doug Ford’s leadership campaign.

As of June 2020, the Mackenzie Health Centre in Vaughan, Ontario will be renamed thanks to a $40 million donation from the Cortellucci family and a little help from the Ford government, which recently tweaked hospital naming policies.

Ford personally attended the unveiling of the hospital’s new name earlier this month and attended an event a year earlier where Cortellucci presented Mackenzie Health with a giant novelty cheque for $40 million.

We are committed to improving access to high quality healthcare here in Ontario.

Today I was joined by @celliottability, the Cortellucci family, and members from @MackenzieHealth to celebrate the brand new Cortellucci Vaughan Hospital, opening in 2021.@sflecce @MichaelTibollo pic.twitter.com/DqsQ7k4NJ1

In a statement issued by the hospital, Ford thanked Cortellucci by name for helping give “our heroic frontline staff a state-of-the-art place to provide quality care.”

“We’re incredibly proud to join Mackenzie Health, the Cortellucci family, and partners from every sector to build a world-class hospital in Ontario that will put patients and their families first,” said Ford.

“We’re humbled to play a small part in contributing to the creation of a first of its kind smart hospital in Canada,” added a statement from the Cortellucci family. 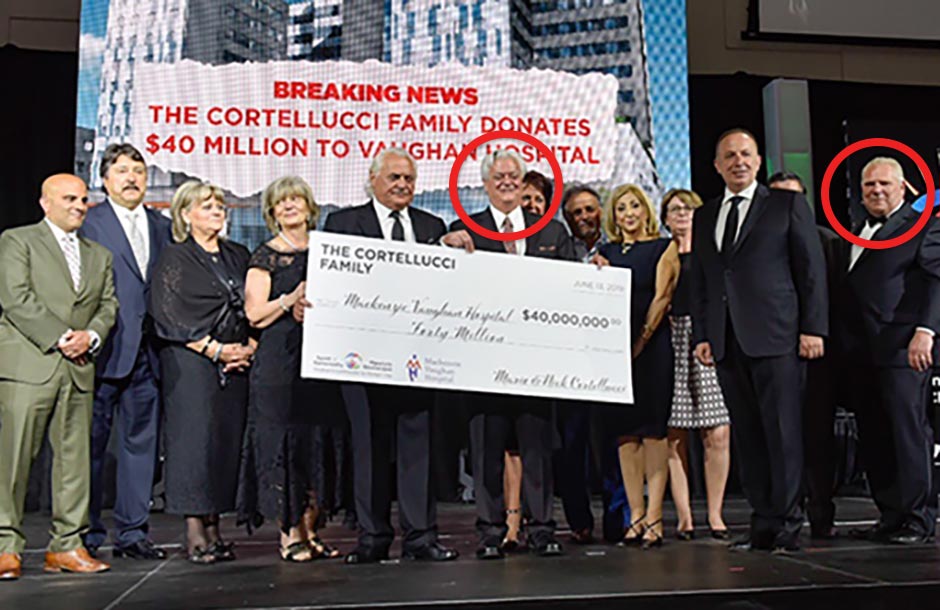 Elections Ontario records show 10 members of the Cortellucci family made large donations to Ford’s leadership campaign in early May 2018, even though the leadership race ended in March.

Mario Cortellucci personally donated $1,200 on May 8 – one day before the 2018 provincial election campaign officially kicked off.

In fact, the Cortelluccis have given over $100,000 to a variety of Conservative and Liberal candidates at different levels of government over the last few decades.

And despite his philanthropy, Mario Cortellucci has at times attracted controversy.

Back in 2018, the Mayor of Vaughan faced an integrity complaint after endorsing his candidacy for the Italian Senate — Cortellucci ran as a candidate of a coalition that included Matteo Salvini’s far-right, anti-immigrant Northern League party.

A hospital spokesperson confirmed to PressProgress that it began discussions with Cortellucci to rename the hospital before the Ford government actually changed the province’s rules on naming hospitals.

“Mackenzie Health was aware that the province was considering lifting the naming directive as part of the government’s red tape reduction initiatives in 2019,” the spokesperson said.

“We did inquire about the timing around a potential decision as we explored recognition options for the Cortellucci family, but didn’t have confirmation until it was publicly announced in December 2019.”

According to the hospital’s website, after the Cortellucci’s $40 million donation in June 2019, “Mackenzie Health and the Cortellucci family began discussions around recognition options.”

But the hospital says it was only in December 2019, when the government quietly listed the “hospital naming directive” to help hospitals attract private donations — that a name change was possible.

“In December 2019, the provincial government lifted the Hospital Naming Directive, recognizing the important role philanthropy plays in health care funding and making named recognition of historic gifts like this one possible. Mackenzie Health began to do the work required by the province to be in a position to introduce Cortellucci Vaughan Hospital to our community just one year after the initial announcement of the family’s generous donation was made.”

The directive Ford lifted was introduced in 2017, reportedly after Toronto East General’s main campus was renamed after a wealthy donor in 2015. Former Health Minister Eric Hoskins said the directive was meant to stop entire hospitals — though not select hospital wings — from being renamed after corporate donors.

The hospital previously attracted criticism in 2017, after it renamed its West wing the “DeGasperis-Muzzo Tower” after $15 million donations by the wealthy DeGasperis family and the Muzzo family, the owner of Marel Contractors.

Both the Cortel group and the Premier’s Office did not respond to multiple requests for comment from PressProgress.