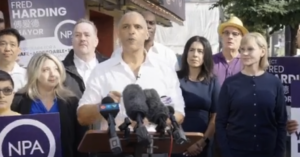 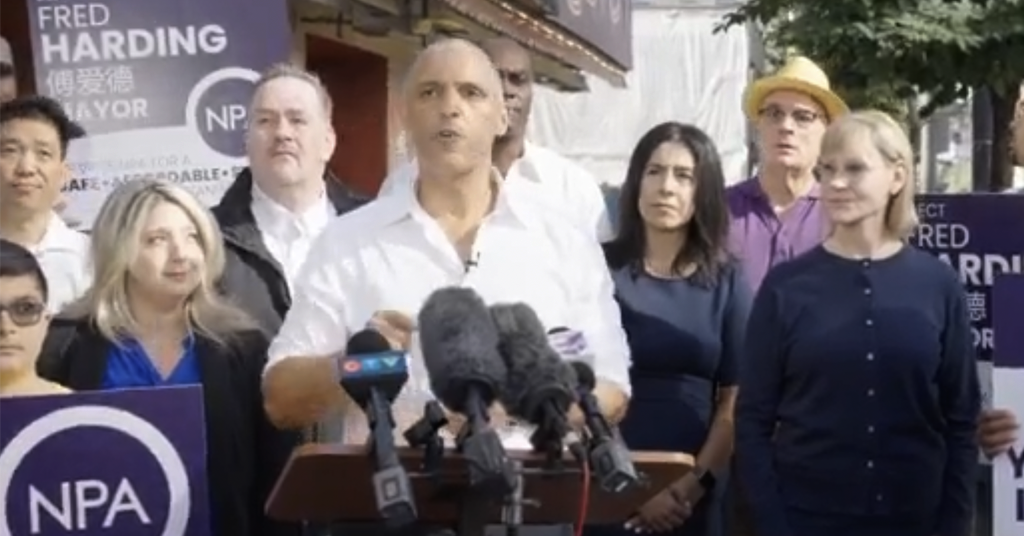 A new Vancouver mayoral candidate was scrambling on his first day after an old YouTube video showing him denouncing an anti-bullying initiative resurfaced on Twitter before the video was quickly set to private without any explanation.

Harding previously ran as a mayoral candidate in 2018 for the Vancouver First municipal party, which self-described itself as a “big tent libertarian-minded party that believes in the rule of law and putting the residents and taxpayers of Vancouver First.”

In the video from 2018, Harding expresses opposition to SOGI 123, a provincial anti-bullying initiative to protect students from discrimination related to their sexual orientation or gender identity, as well as to provide resources to educators.

In the video, Harding vows to fight SOGI and what he calls an “overreaching” provincial government.

“With SOGI, they got it all wrong,” Harding said.

“Foisting something so controversial, so different, without meaningful consultation with parents is foolish and it is wrong.”

The video, which was posted on the YouTube channel of Vancouver First,  resurfaced after it was tweeted by a city council candidate running under the banner of another municipal party led by former NPA mayoral candidate Ken Sims. The video was later set to private.

Harding went on to add that Vancouver First would defend “parents and guardians who demand more control over the education of their loved ones.”

Harding faced backlash in 2018 which led to the departure of Vancouver First school board candidate Tony Dong in 2018, who quit a week before the election due to Harding’s video. Harding later stated that the problem with SOGI was what he called a lack of consultation.

“What I actually said is that the government needs to be communicating, consulting with parents when they’re bringing in curriculum.”

Harding is facing backlash once again after the video has resurfaced on Twitter Tuesday, including from former Councillor Rebecca Bligh who left the NPA in December, saying the party has taken a turn to the “far-right.”

The writing was on the wall after the AGM 2019. This is precisely why I left the NPA. Not at all surprised the right-wing board ignored the internal backlash and pushed ahead announcing their anti-SOGI mayoral candidate. #vanpoli https://t.co/o2pLnpqSSs

The NPA has made headlines over its hard right turn in recent years. In 2019, a former Rebel Media correspondent was elected to the party’s board of directors. Another board member of the NPA, Angelo Isidorou, resigned in 2021 after The Tyee published a photo of him wearing a “Make America Great Again” hat and flashing a hand sign associated with hate groups at a pro-Trump Rally in Vancouver.

Former NPA Councillors Sarah Kirby-Young, Lisa Dominato and Colleen Hardwick also left the party in April of this year, stating that the NPA “cannot be trusted to govern fairly or responsibly.”

In 2018, Harding came sixth for mayor among the major parties who ran a slate of candidates, receiving under 6,000 votes in the Vancouver mayoral race while Vancouver Mayor Kennedy Stewart received over 49,000.

The NPA Vancouver did not immediately respond to a request for comment from PressProgress.