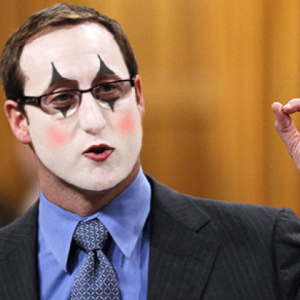 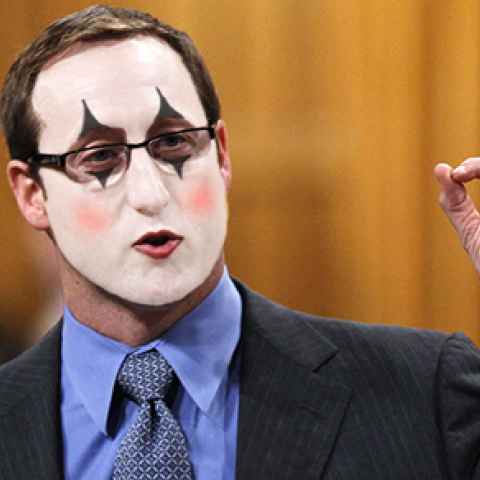 New Year’s Eve is that special time of year in which we all make resolutions to become better people and improve ourselves — even Tory ministers. Sure, they’re total pros at breaking promises. But after a calamity-filled 2014, most of the government’s ministers are in dire need of resolutions to “better” themselves in 2015. Here […]

New Year’s Eve is that special time of year in which we all make resolutions to become better people and improve ourselves — even Tory ministers.

But after a calamity-filled 2014, most of the government’s ministers are in dire need of resolutions to “better” themselves in 2015.

Here are our suggestions for 10 members of cabinet:

Peter MacKay: Learn how to mime

After putting your foot in your mouth almost every time it opened in 2014, becoming a full-time mime might allow you to reclaim a semblance of respect — and improve your performance as Justice Minister. Then again, you’ll probably still find creative ways to mime occasional musings about women’s duties around the home. As Minister of Finance, use slumping oil prices as political cover to dump the Economic Action Plan, Family Tax Plan and other ill-conceived cuts. Then use the money saved on something useful — like a national child care policy. (Or sending MacKay to mime school.)

For starters, find a way to incorporate the word “crazy” into all future answers and policy announcements — because it worked so well in dismissing gas and oil regulations. Heck, why not rebrand the whole operation as the Crazy Conservative Party of Canada?

Then go “all musical, all the time.” The public and media seem to get all mushy whenever you’re at a piano. So why not run a 100% musical election campaign! Sing your way through stump speeches, media questions and leaders debates! Bring your keyboard on the campaign trail! Plan a song for every campaign issue! For example, if another leader goes after your government’s dismal climate change record, all will be forgiven if you break into this cute little number:

And the struggle of “being green” brings us to….

The environment portfolio under your government is like being appointed “Minister of Humpty Dumpty” and then being given a mandate to push him off the wall. As the fifth environment minister to pay mock deference to climate change and gas and oil regulations, why not just embrace inaction? Show up at the 2015 United Nations summit in Paris in a gas guzzler, don’t enter the building, and just sit out front idling until the meeting wraps.

Simmer down. As Minister of Foreign Affairs, you should take up yoga or meditation. We’ve seen you play attack dog in Question Period. As a visionary leader once said: “Anger, fear, aggression; the dark side of the Force are they.”

Your time as President of the Treasury Board may be running short. And gazeebos certainly don’t pay for themselves. Taxpayers do! After October 19, 2015, the beleaguered citizens of Muskoka may have to fend for themselves for additional gazeebos. Your move, Tony. The clock’s ticking.

Not a talent required for your current portfolios, but you’ll need that poker face in 2015 when everyone is asking about your leadership aspirations should Harper lose or only form a minority. Also, practice saying the following in a deadpan voice in front of a mirror. “Replace Stephen Harper? Not a chance. The man deserves sainthood! BEST. LEADER. EVER. Those shoes are too big to fill! If Gandhi, Hercules, Mother Teresa and Margaret Thatcher could somehow inexplicably have a grandchild, it would basically come into the world as Stephen.” Then while the questioner looks very confused, just walk away whistling with your hands in your pockets.

Julian Fantino: Go on the offensive

OK, we get that you’re afraid of confrontation as Minister of Veterans Affairs. But instead of avoiding criticism and angry veterans, and running away from angry veterans’ wives, maybe you should try meeting your naysayers head on! You’ll think of something. Maybe challenge any critic to an arm-wrestling match or a hot dog eating competition?

With some facial hair, people may stop mistaking you for a parliamentary page. Oh, and also please stop disenfranchising voters.

Given your government’s climate change policy, and our rapidly shrinking glaciers, this might be the best use of your time as Minister of Transport.