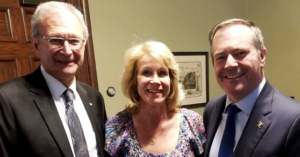 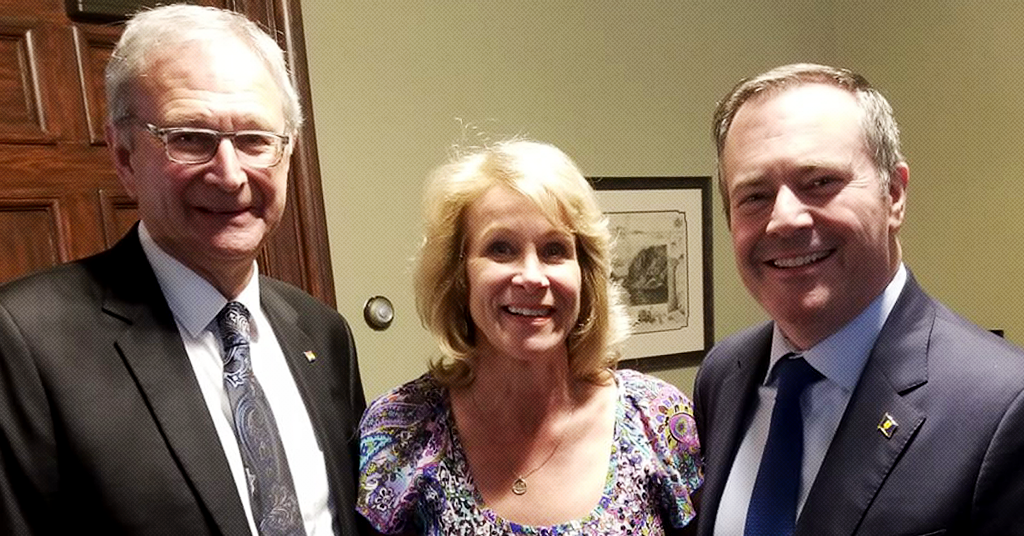 Sherry Wilson, the Tory candidate in Moncton Southwest, recently served in Higgs’ now-dissolved government as the Minister of Service New Brunswick as well as the Minister responsible for Women’s Equality.

According to Campaign Life Coalition, Wilson is the only provincial candidate that the anti-abortion group currently identifies as being “supportable” owing to the fact that she “answered (the) questionnaire perfectly.”

Wilson’s responses, as published on the anti-abortion group’s website,  indicates that she “will uphold the current law of not funding abortion in private facilities” — a hot button topic that continues to dog Higgs through the election campaign.

However, Wilson’s responses go further, stating she would also “support measures to stop funding abortions with taxpayers money in all New Brunswick hospitals.”

The anti-abortion questionnaire also indicates the New Brunswick Tory said “no” when asked: “Are there any circumstances under which you believe a woman should have access to abortion?” 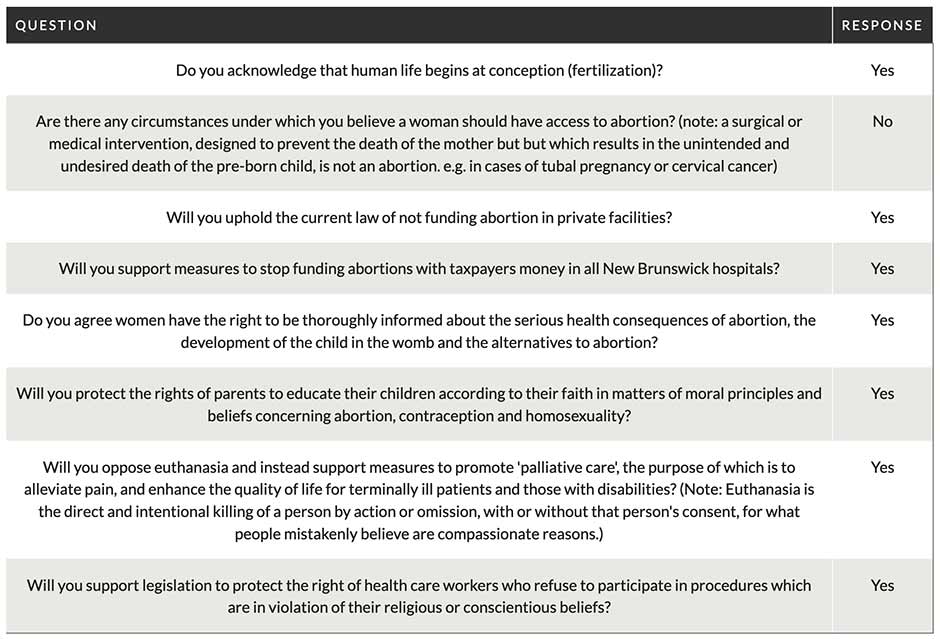 In a statement to PressProgress, the Tory candidate did not deny advocating any of those positions, but said she doesn’t remember filling-out the questionnaire, which Campaign Life Coalition indicated she provided to them on September 16, 2014.

“I do not recall answering this questionnaire, and if I did answer it, it was most likely a long time ago,” Wilson told PressProgress. “My answers would be different or certainly more nuanced.”

“My own personal beliefs are just that,” Wilson explained. “I understand that the law is clear on publicly funded abortions.”

Despite responses that suggested she opposed abortions under “any circumstances,” Wilson now acknowledges “there are most certainly many conditions,” under which “an abortion might be the preferred course of treatment for a person on the gender spectrum who is pregnant,” including “sexual assault” or “health risks.”

The Tory candidate also distanced herself from the position on defunding abortions in New Brunswick hospitals that was noted by Campaign Life Coalition.

“The answer is now no,” Wilson said.

Wilson offered the same response for her “purported” support for upholding the current law on funding abortions in private facilities, pointing to her government’s “position that the current level of services offered in our province is in full compliance with the Canada Health Act.”

“My views have evolved over the past decade,” Wilson explained.

But it remains unclear when exactly her views evolved, given Wilson has attended a number of anti-abortion events alongside her PC caucus members for several years during the last decade.

In 2015, Wilson stood front-and-centre as a dozen PC MLAs denounced abortion at the annual March for Life event at the provincial legislature in Fredericton.

“PC MLAs have continued to maintain that only abortions that are medically-necessary be performed in public hospitals,” New Brunswick PC MLA Jody Carr told CTV Atlantic at the time.

Wilson was also one of 10 Tory MLAs who attended Fredericton’s March for Life event in 2016.

In 2017, video shows Wilson stood directly behind PC leader Blaine Higgs as he praised anti-abortion protesters and told them that he shares their convictions.

“I just want to say I’m proud of each and every one of you for being here, I’m proud of the conviction which, once again I say, I share.”

Campaign Life Coalition did not respond to questions from PressProgress about the survey answers Wilson provided to the anti-abortion group.

The group gives Wilson a 75% rating on her “life and family issues voting score.”