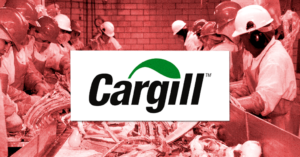 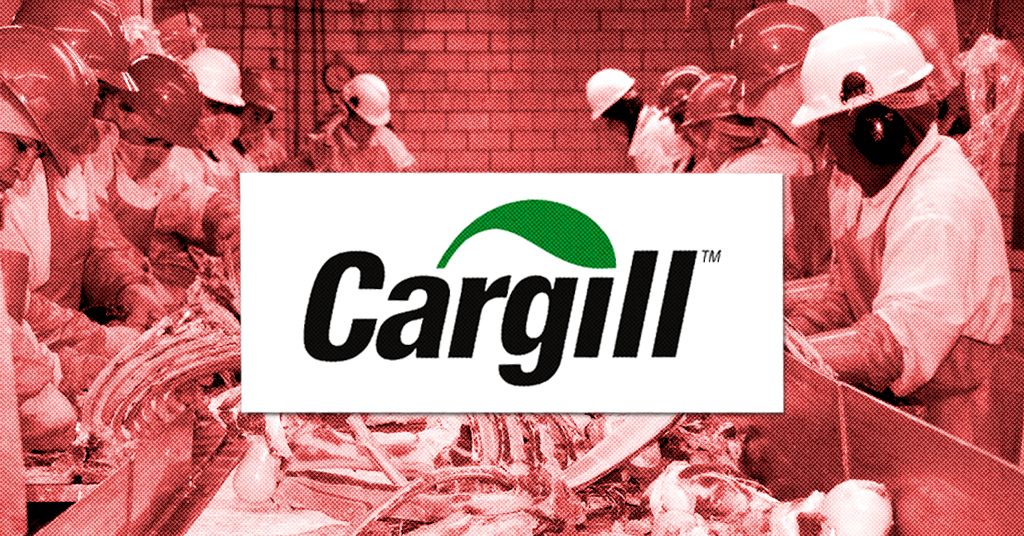 Workers at Cargill’s meat processing plant in High River, Alberta, site of the biggest COVID-19 outbreak in North America, are speaking out after they say the company ignored their concerns and withheld important health and safety information as the virus spread through the slaughterhouse.

Cargill’s High River plant employs over 2,000 workers and produces nearly half of Canada’s beef supply. Over 1,500 workers have now tested positive for COVID-19.

Meat packers  worked in “shoulder to shoulder” conditions prior to the outbreak. Media reports this week revealed Alberta Occupational Health and Safety found the company did not include workers in its health and safety processes, something that is required under the province’s OHS Act.

According to the Calgary Herald, workers voiced concerns about work conditions at Cargill’s plant directly to Alberta Agriculture Minister Devin Dreeshen during a telephone town hall in mid-April.

A number of Cargill workers told PressProgress the company was made aware of health and safety concerns on multiple occasions through March and April.

“In March, they wouldn’t answer questions,” Joseph Kog, a union shop steward who has worked at the plant for 14 years, told PressProgress. “They didn’t give any information to the employees.”

“We told them before in early April, since we have cases now we have to shut down, but they didn’t listen,” Kog added.

“They stopped doing the safety measures three days before shutting down.”

Jamie Rolo, who was on the health and safety committee one of the plant’s worker representatives, told PressProgress that the company’s managers “weren’t listening” to their concerns.

“On March 26 we asked for an informal Joint Health and Safety meeting so we could discuss preventative measures for COVID19,” Rolo said. “We mentioned back then issues with microwaves, issues with the tables, etc, but they didn’t listen to us until after OHS came and said ‘No, this is unacceptable’.”

“It was a little ridiculous. Back then we we’re trying to think of ways to help the workers, we were on the JHSC, but we weren’t being heard.”

“I asked if they called Alberta Health Services for tracking and what measures they were taking to prevent the spread and keep workers safe,” Rolo added, noting some workers were reassigned “to cover other departments due to low staff because that could mean having to quarantine entire departments.”

The union representing Cargill’s plant says the company treated its health and safety committee like a “rubber stamp.”

“That committee is supposed to have some authority,” Michael Hughes of the United Food and Commercial Workers Union Local 401 told PressProgress. “Cargill was restricting the committee’s access to information.

The workers’ accounts echo OHS’ own findings on conditions at the Cargill plant.

After reviewing the company’s documents, OHS concluded Cargill’s investigation into the COVID-19 outbreak was “not conducted with the participation of the joint work site health and safety committee as required under section 40(6) OHS Act.”

OHS added: “Cargill Limited has not demonstrated to OHS that any attempt was made to engage the worker representation of the joint work site health and safety committee in Cargill’s investigation.” 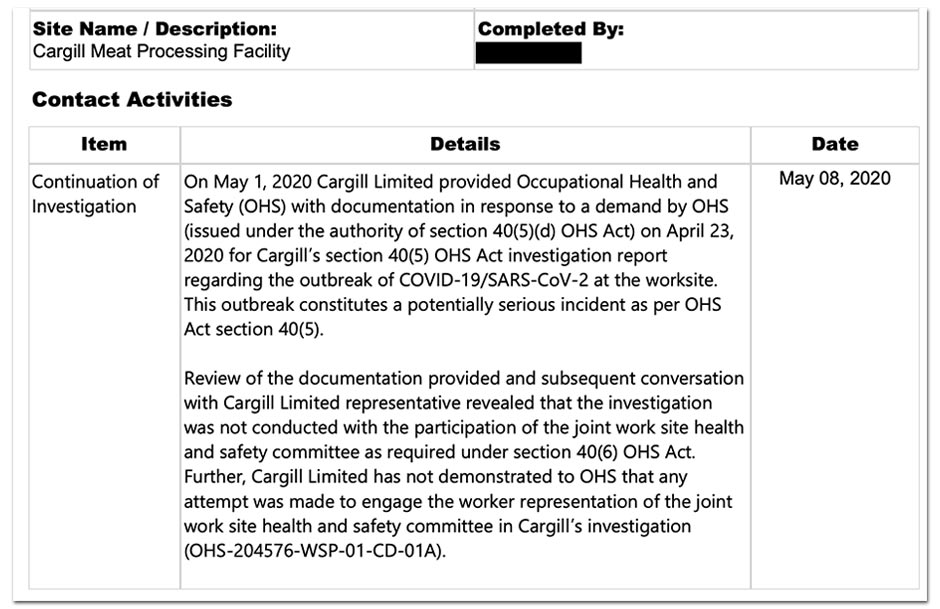 Dale LaGrange, the plant’s general manager, did not respond to questions from PressProgress about allegations that the company ignored concerns raised by workers and withheld health and safety information.

Graham White, a Calgary-based representative of National Public Relations, replied on LaGrange’s behalf, stating that “the company is not able to respond publicly to alleged specific exchanges or events” because “it is still an active investigation.”

The public relations specialist provided a written response to allegations employees were not consulted as part of the Joint Health and Safety committee and requested it be attributed as a “company statement”:

“Cargill was not found in ‘non-compliance’ of the OHS Act and a new order was not issued against Cargill. The  OHS Officer has given Cargill more time to complete its investigation and further involve the Plant’s joint health and safety committee. It is common during an investigation for OHS Officers to direct the employer to consider additional information as part of the investigation. Cargill fully intends on cooperating with the OHS Officer’s direction and will consider further recommendations from the committee, if any. The OHS Officer would be statutorily required to issue a stop work order if the plant is found to be unsafe. Cargill has not been issued a stop work order.”

To date, three workers at Cargill’s High River plant have died from COVID-19.