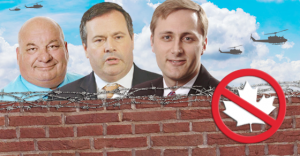 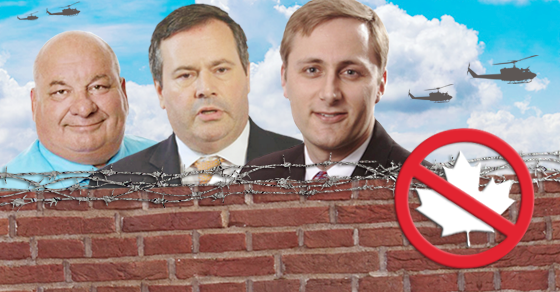 What if Conservative MPs were held to the same standard as Kellie Leitch's "anti-Canadian values" test?

After getting slammed by several members of her own party for floating the Trump-inspired idea of having the “Canadian government screen potential immigrants for anti-Canadian values,” Leitch would like all of us to know she is not pandering to xenophobes and no, this isn’t a desperate play for attention to energize her otherwise boring and emotionless candidacy.

Believe it or not, Leitch’s new line is that her ideological purity test is really about promoting “tolerance.”

Hard to say how much of it Leitch believes herself, but she tried to polish up her “dangerous” and “unworkable” proposal by claiming the values she speaks of include everything from “freedom and tolerance” to “hard work.”

“Screening potential immigrants for anti-Canadian values that include intolerance towards other religions, cultures and sexual orientations, violent and/or misogynist behaviour and/or a lack of acceptance of our Canadian tradition of personal and economic freedoms is a policy proposal that I feel very strongly about.”

You’d think a government banning people for their beliefs would terrify certain conservatives who always seem so darned paranoid about “political correctness,” right?

For example, what if Conservative MPs were held to the same standard as Leitch’s “anti-Canadian values” test?

Here are just a few of many Conservative MPs who’d likely fail: If Kellie Leitch wants to screen for intolerance towards other religions and cultures, she doesn’t need to look much further than Conservative MP Larry Miller.

In a story reported by PressProgress last year, Miller reacted to the controversy surrounding the niqab by declaring those Muslim women should “stay the hell where you came from.”

Miller went on to describe his views on the Canadian value of tolerance in more detail:

“I’m so sick and tired of people wanting to come here because they know it’s a good country and then they want to change things.” What about intolerance towards different sexual orientations?

Leitch should ask Conservative leadership candidate Brad Trost how he feels about that?

This spring, Trost reacted to his party’s decision to drop its opposition to same-sex marriage in favour of a neutral position on the question by publicly announcing “gay marriage is wrong”:

“I will say homosexual marriage, gay marriage is wrong. I’ll be public about it … The language of equality and comparisons, to me that’s socialist language, the way they do it. The same way they talk about equality of income where they want a tax from the rich to bring them down to the level of the poor. So I completely reject the underlying philosophy behind this.”

“Look, I’m a big boy. I can handle this … For veteran MPs, this is like. Michelle’s a rookie. She doesn’t quite understand what all went into this.” Leitch says personal “freedom” is not only a Canadian value – it’s a proud “Canadian tradition.”

So which part of “true north strong and free” does Jason Kenney not understand?

Kenney, who is currently campaigning for the leadership of Alberta’s PCs while still collecting his federal MP salary, would probably meet Leitch’s definition of “anti-Canadian.” His social conservative views have earned him the highest possible rating from the anti-abortion group Campaign Life Coalition (along with 85 other Conservative candidates last election), a group that opposes women having the freedom to take care of their own bodies.

“Kenney is arguably one of the highest profile pro-life politicians Canada has ever had,” another anti-abortion group that is supporting Kenney’s PC leadership bid recently declared, touting “Jason Kenney’s perfect pro-life voting record.”

Not only was Kenney the former chair of the parliamentary pro-life caucus, but back in his college days in San Francisco, Kenney was quite the “anti-abortion activist.” Kenney even tried to suppress a women’s group from spreading awareness about abortion rights on campus, claiming that if they allowed women to talk abortion, there would be no stopping the Ku Klux Klan, pedophiles or the Church of Satan from peddling their ideas too.

So much for freedom.

It’s a wonder how he ever made it back across the border? It’s not clear how Leitch could even test someone’s belief in “economic freedom” – maybe the Fraser Institute and the Chinese-backed government in Hong Kong could help? – but one former Conservative MP would definitely fail that test miserably.

Responding to a letter from Canadian tech companies complaining about the impact of the Harper government’s heavy-handed legislation on their customers and businesses, Hawn criticized their “lack of commitment to the values that bind us as Canadians”:

“I would suggest that if websites providing content, hosting services or other business are profiting from the dispersal of this type of horrific material, they should seriously reconsider their business model and lack of commitment to the values that bind us as Canadians.” Leitch vows she won’t let anyone in who doesn’t believe in “equality of opportunity.”

If that’s true, then being a good Canadian mean supporting an affordable national childcare program too, right?

Unfortunately, Conservative MP Candice Bergen once said she opposes child care (like the rest of her party) because it is her “core belief” that “big, huge government-run daycares” should not “dictate to families how to address their child care needs” – a set of talking points that perfectly mirrors Republican Tea Party arguments opposing Obamacare.

Now that doesn’t sound very Canadian, does it? Hey, Kellie Leitch: is this what “hard work” looks like?